I heard this song several times on my Sirius/XM and I never got the name of the song or the singer and it was one of those quirky fun songs that flourished in the 1980's.  Well Last Monday on the way to work, I actually got the name of the song and I was flabbergasted by the title.  I decided to use this song on my next "Monday Music".   You know how many pics there are on the internet Using "Girls with Guns". 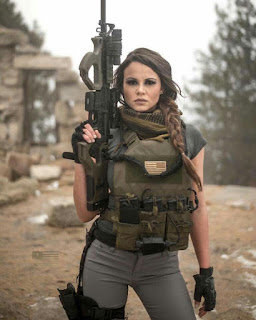 This one is very mild, there were some that were NSFW

Girls with Guns is the debut solo album from Styx guitarist/vocalist Tommy Shaw. It was released in October 1984 by A&M Records. 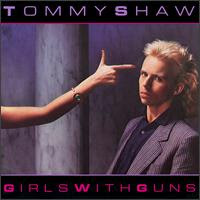 The title track was a top 10 hit at rock radio, peaking at #6 on the Billboard Mainstream Rock Tracks chart and reaching a high of #33 on the Billboard Hot 100. "Girls With Guns" was featured in the first season Miami Vice episode "Glades".
A second single, the ballad "Lonely School", was released in late 1984 and peaked at #60 on the Hot 100 in January 1985. The videos for both singles received premiere status and strong rotation at MTV, and the network aired a concert special featuring Shaw.
The CD and cassette formats of the album feature extended versions of the ballad "Kiss Me Hello" and the dance-rock track "Outside in the Rain".
The Girls With Guns album charted on the Billboard 200 Albums chart for 25 weeks, peaking at #50.