The modern class struggle and the Trump effect.

I got this from my Online friend Brad Torgersen, he had picked it up off USA Today.  I was surprised as was everyone else that the liberal USA Today would print something that wasn't a character assassination on President Trump.  I have blogged repeatedly about the Trump effect and why he got elected, he was the first president that spoke of the forgotten man.  the one that seemed to get forgotten in the inter-sectional identity politics of the modern age.  he surprisingly has become the spokesman for the middle class, you know the one that the GOP traditionally ignores and the Democrats discarded.  You know the ones that President Obama called "Bitter Clingers" and 2016 democratic candidate Hillary Clinton called "Basket of deplorables".  We are the ones forgotten about when the politicians play their games in D.C on the Potomac.  It seems like we play by the rules and "do right" by society by working, paying bills and the myriad of taxes.  Our kids are the ones joining the service and sacrificing but "Our Betters" children go to the Ivy League schools to learn how to network and then use the system to their advantage. 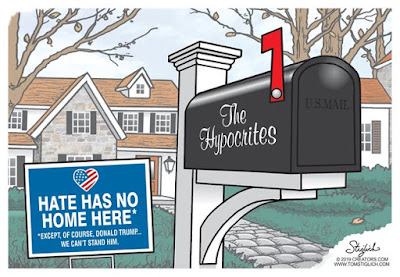 The article from USA Today:

To understand events around the world today, one must think in terms of the class struggle.
This sentence sounds like something that could be written by a doctrinaire Marxist. But it is nonetheless true. Much of the current tension in America and in many other democracies is in fact a product of a class struggle. It’s not the kind of class struggle that Karl Marx wrote about, with workers and peasants facing off against rapacious capitalists, but it is a case of today’s ruling class facing disaffection from its working class.
In the old Soviet Union, the Marxists assured us that once true communism was established under a “dictatorship of the proletariat,” the state would wither away and everyone would be free. In fact, however, the dictatorship of the proletariat turned into a dictatorship of the party hacks, who had no interest whatsoever in seeing their positions or power wither.

"Yellow Vest" protesters near the Champs Elysees in Paris on Nov. 24, 2018. (Photo: Bertrand Guay/AFP/Getty Images)
Read more commentary:
Today's kids love socialism — but it's not because of their radical professors
Castro, Chavez, and 'bad luck': Glenn Reynolds
On Syria, Trump is right to ignore failed foreign policy elites who embroiled us in Iraq
Yugoslav dissident Milovan Djilas called these party hacks the “New Class,” noting that instead of workers and peasants against capitalists, it was now a case of workers and peasants being ruled by a managerial new class of technocrats who, while purporting to act for the benefit of the workers and peasants, somehow wound up with the lion’s share of the goodies. Workers and peasants stood in long lines for bread and shoddy household goods, while party leaders and government managers bought imported delicacies in special, secret stores. (In a famous Soviet joke, then-leader Leonid Brezhnev shows his mother his luxury apartment, his limousine, his fancy country house and his helicopter only to have her object: “But what if the communists come back?”)
Djilas’ work was explosive — he was jailed — because it made clear that the workers and peasants had simply replaced one class of exploiters with another. It set the stage for the Soviet Union’s implosion, and for the discrediting of communism among everyone with any sense.

But the New Class isn’t limited to communist countries, really. Around the world in the postwar era, power was taken up by unelected professional and managerial elites. To understand what’s going on with President Donald Trump and his opposition, and in other countries as diverse as France, Hungary, Italy and Brazil, it’s important to realize that the post-World War II institutional arrangements of the Western democracies are being renegotiated, and that those democracies’ professional and managerial elites don’t like that very much, because they have done very well under those arrangements.  And, like all elites who are doing very well, they don’t want that to change.
The postwar era saw the creation of international institutions ranging from NATO to the United Nations to the World Bank, along with a proliferation of think tanks and nongovernmental organizations (NGOs) to accompany them. It saw the vast expansion of higher education in the United States, and the transformation of academic degrees into something close to must-haves for the upper-middle class. It saw a great expansion of power on the part of media organizations, and on the part of government bureaucrats and lobbyists, both of whose numbers increased enormously.
But after the turn of the millennium, other Americans, much like the workers and peasants in the old Soviet Union, started to notice that while the New Class was doing quite well (America’s richest counties now surround Washington, D.C.), things weren’t going so well for them. And what made it more upsetting was that — while the Soviet Union’s apparatchiks at least pretended to like the workers and peasants — members of America’s ruling class seemed to view ordinary Americans with something like contempt, using terms such as “bitter clingers,” “deplorables” and flyover people.

Suddenly, to a lot of voters, those postwar institutional arrangements stopped looking so good. But, of course, the beneficiaries showed no sign of giving them up. This has led to a lot of political discord, and a lot of culture war, since in America class warfare is usually disguised as cultural warfare. But underneath the surface, talk is a battle between the New Class and what used to be the middle class.
If you look at the “yellow jacket” protests in France, the election of Brazilian President Jair Bolsonaro and events in places like Italy and Hungary — or, for that matter, the Brexit movement in Britain — you find a similar unhappiness with institutional arrangements and the sleek and self-satisfied elites who benefit from them.  People who, in President Bill Clinton’s famous phrase, worked hard and played by the rules now suspect that the rules were rigged, and that they were treated as chumps.
Talking about the yellow-vest movement, French geographer Christophe Guilluy observes: “Immediately, the protesters were denounced as xenophobes, anti-Semites and homophobes. The elites present themselves as anti-fascist and anti-racist, but this is merely a way of defending their class interests. It is the only argument they can muster to defend their status, but it is not working anymore.”
That’s right. It’s class war masquerading as something else, but people have seen through the mask.
Understanding this won’t make the conflict less intense, but it might make it clearer what’s really at stake. What’s happening in America is an echo of what’s happening in democracies around the world, and it’s not happening because of Trump. Trump is the symptom of a ruling class that many of the ruled no longer see as serving their interest, and the anti-Trump response is mostly the angry backlash of that class as it sees its position, its perquisites and — perhaps especially — its self-importance threatened.
Glenn Harlan Reynolds, a University of Tennessee law professor and the author of "The New School: How the Information Age Will Save American Education from Itself," is a member of USA TODAY's Board of Contributors.
Posted by MrGarabaldi at 2:00 AM