A New age of Warfare and advent of the Ships of Iron. 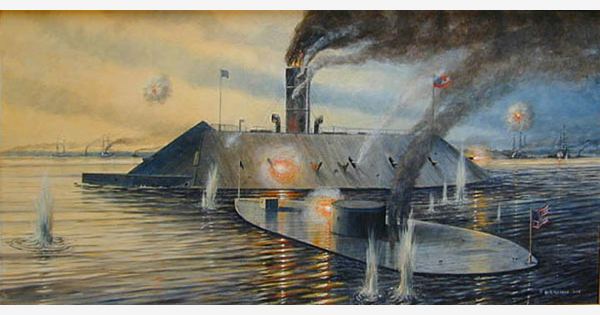 
Damage was done to both vessels, but nothing disabling. In fact, at one point during the confrontation, the Virginia's guns fell oddly silent. Catesby Jones, the ironclad’s commander, inquired as to the pause. From the gundeck Lieutenant Eggleston responded wryly, “I find that I can do her as much damage by snapping my thumb at her every two minutes and a half.”
A shot finally struck the Monitor’s pilot house, momentary blinding the captain, and the vessel withdrew momentarily to make a change in command. It soon returned to combat, however, only to discover the Virginia's – thinking its foe had given-up the fight – departed. Both sides subsequently claimed victory, but there is little question the first clash of iron warships had ended in a draw.
Regardless of wins and losses, however, every wooden warship then in existence had been instantly rendered obsolete, naval blueprints altered forever. And while Virginia's had made a fine showing, it would be the gritty little Monitor with its low silhouette and revolving gun turret, that would inspire naval concepts of the future.
Indeed, it would not be overstatement to suggest that every battleship of the 20th Century – from Dreadnaught to Bismarck to Missouri – had direct bloodlines back to John Ericsson’s innovative design, and that on March 9, 1862 a page in the book of naval warfare had been emphatically turned.
Posted by MrGarabaldi at 5:00 AM