4 Major Mistakes the Axis Powers Made during WWII 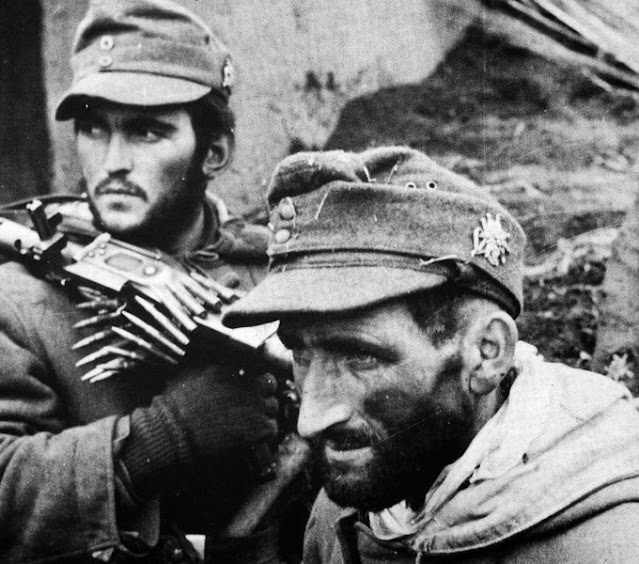 Looking back at WWII there have been four decisions made that, in the end,  did not work out to the Axis advantage. Of course, you can argue that starting the war in the first place was the biggest mistake made. But, for the sake of the argument, let us look at four mistakes that were made after the war was started.

Having allied themselves with Italy, although ideologically similar, was something that the Nazis should not have done. Time and again the Nazis were forced to come to the aid of Italy after the fascists launched an ill-conceived invasion or bit off more than they could chew.

Getting the German forces involved in North Africa, a costly commitment, was bad enough, but the forced German invasion of Greece could not have come at a worse time.

In March of 1941 Mussolini, the Fascist dictator of Italy, was still angry with Hitler after he failed to inform the Italians beforehand of his plans to invade France and the Low countries. This made Mussolini decide he was going to surprise Hitler and invade Greece without telling him. The Italian advance quickly bogged down and after a few weeks, the Greeks had fought them back to their starting point. The British came to the aid of the Greeks and landed forces in what Churchill called the soft underbelly of Europe.

This loss of face for the Axis powers could not be accepted by Hitler, who ordered his generals to come up with a plan to secure his, now vulnerable, southern flank. This meant that the Invasion of the Soviet Union, which was supposed to start in early spring, had to be postponed to June 22nd. As it turned out, this delay proved fatal.

Even though it was inconceivable that Nazis would not invade the Soviet Union, so was the Molotov-Ribbentrop pact which they signed on August 13th, 1939. This non-aggression pact allowed Nazi Germany to invade Poland without having to worry about a possible war with the USSR.

It even went so far that Poland was divided between the two and the part that the Soviets took in September 1939 has never been returned to Poland. It also gave the Soviets free reign in expanding their influence in the Eastern European countries and they lost no time in subjecting them to their rule.

The fact that the two sworn ideological enemies were willing to sign a non-aggression pact shook the world and allowed Nazi Germany the time to focus its attention on the western Europe without having to fear a war on two fronts. Germany made the most of this freedom and, in quick succession, defeated Denmark, Norway, The Netherlands, Belgium, and France.

Only their planned invasion of the United Kingdom was thwarted by the Few of the Royal Air Force, the first setback for the Nazis. Deteriorating weather caused the invasion of Britain to be postponed indefinitely, and Hitler once more turned to the East where, according to his book Mein Kampf, he believed the “Lebensraum” (living space) was which the Germans needed above all other things. However, this living space was occupied by the Russians. Russia had now moved its western borders hundreds of kilometers closer to Nazi Germany as a result of the pact.

Unable to knock Britain out of the war first and thus faced with a war on two fronts, which he had vowed to avoid at all costs, Hitler invaded the Soviet Union. Hitler was confident the Soviet Union would be defeated in mere weeks, and he is quoted as having said: “We have only to kick in the door, and the whole rotten structure will come crashing down.”

However, most of the first month, if not six weeks, was spent fighting a way through countries now occupied by the Soviet Union. These countries might otherwise have been ensnared into the Axis camp, had it not been for the pact.

The extra territory gave the Soviets the ability to trade space for time and, with the extra delay caused by the invasion of Greece, meant that Nazi Germany could not complete its conquest during the remaining period of good weather. The autumn rains rolled in and turned most of Russia in a quagmire of mud which made all movement virtually impossible. Then Winter arrived early, with extreme cold for which the Germans were not equipped.

In a history similar to the German attack on the Soviet Union, the Japanese wanted an empire of their own to secure the future prosperity of a country which they thought did not have enough natural resources to sustain the population. The Germans called it “Lebensraum,” the Japanese called it the “Greater East Asia Co-Prosperity Sphere.” It amounted to the same thing.

Having occupied vast portions of China and some countries in East Asia the next step was to expand its empire east into the Pacific ocean. Their eye was on the prosperous and natural resources that were under the control of the British and Dutch empires and the American-governed Philippines. However attacking these would cause the United States to join the war on the side of the allies.

America, on the other hand, had kept an eye on Japanese conquests and brutality and, short of war, did what they could to restrict them. In July 1941 they embargoed the export of oil to Japan which then calculated that, without acquiring the oil in the Dutch East Indies, they only had enough fuel for two years. They reasoned that now there would be no other option than going to war.

Realizing that they could not defeat the USA in direct battle, they chose to deliver a crushing blow to the American fleet based at Pearl Harbor. This would give them time to complete their desired conquests and present the Americans with a “fait accompli.” They reasoned the Americans would not be willing to enter a protracted war with Japan, and they would be able to make peace, keeping their vital conquests and handing back the less desirable places.

Fate, or bad Japanese intelligence, intervened on the Allied side on December 7th, 1941 and the vital American Aircraft carriers were not in port when the Japanese struck Pearl Harbor. This meant the Americans were able to fight back causing the Japanese Admiral in charge of the attack to say (supposedly) “I fear all we have done is to awaken a sleeping giant and fill him with a terrible resolve.”.

No alliance between the Nazis, Spain, and Turkey

One look at the map of Europe will show the strategic importance of both Spain and Turkey. However, these two were two of the few countries on the European mainland that remained neutral during the second world war.

Even though Spain remained neutral during the First World War, it was expected they would come in on the side of the Axis after all the help Hitler had given General Franco in the Spanish Civil War. However, despite pleading and perhaps even begging, Franco remained adamant. He would not join the Axis and would not even allow the Germans to pass through his country (as the Swedes did).

Not being able to pass through Spain meant that Great Britain was secure in using its military base in Gibraltar. Not only did this effectively seal off the entrance to the Mediterranean from Atlantic ocean for the German Navy, but it also gave the British a location from which it could support Malta and Egypt. Possession of Malta meant the British could interdict shipping from Italy to North Africa. Possession of Egypt meant it could stop the Axis from linking up with their forces fighting in the Caucasus (Soviet Union) and taking the much-needed oil fields in the middle east.

Turkey fought on the side of the Axis in the First World War yet declined to join them in the Second. This, again, meant the Germans could not link up with their forces in the Caucasus making the capture of Egypt paramount. In February 1945, Turkey joined the Allies and declared war on a virtually defeated Nazi Germany.

One final note, The German General Staff was gearing for War but they were not planning for War until 1946 truth be told, if memory serves, they wanted to have all the German armed serves fully modernized, from the Army, Navy and the Air Force.  The Navy wasn't ready to take on the Royal Navy, they had just started building an Aircraft Carrier and the associated airwings, plus the German armor wasn't caught up with the theories of Blitzkreig yet, and if it wasn't for the fortuitous acquisition of the Czech arms industry , the Germans wouldn't have had enough tanks to invade Poland.  Most of the German Army artillery still used Horses as their prime movers and most of their soldiers moved from point A to Point B the same way like the Roman Legions, walking on the excellent road systems unless they used the trains to ferry the troops, supplies and horses to their embarkation points, and once the war started, they walked.  Hitler kicked off the war before his General staff wanted him to, and fortunately for him, his opponents were even unprepared than Germany was and the myth of German invincibility was born.