Last year I did a Post about the Cannonball record being broken in a modified AMG BENZ to look like a silver family sedan.  Well the Record was broken since that time and post by another team.  Well the team that did the Benz last year went to break another record using modified Audi A-6 or   a Fake Ford Interceptor
to do the run. 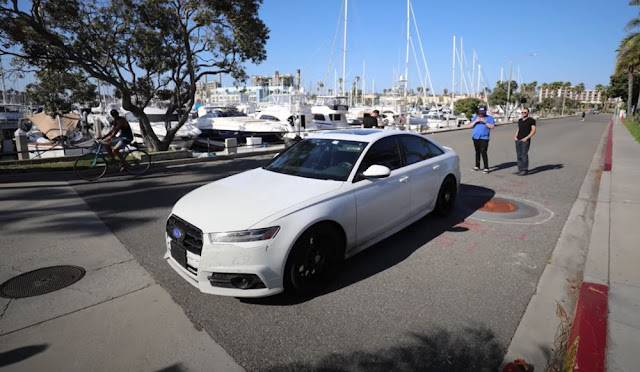 Here is the Video they made afterwards.


I pulled the following article off the "Daily Mail UK," I was looking for other things and ran across the article by accident,  As in the past, the foreign media tends to be more accurate than the American media who is totally ate up with TDS.  Where during the Obama years, the American media was ate up with "Protecting the Messiah"


The cross-country Cannonball Run record has been broken again - by the same duo who originally set the record for fastest drive across the US late last year.
This time around, Doug Tabbutt, of Twinsburg, Ohio, and Arne Toman, of Chicago, managed the 2,816 mile drive from New York City to Los Angeles in just 25 hours and 39 minutes, setting the new unsanctioned, Cannonball race record.
The drive, which was completed in secrecy in early May, bested their November 2019 record-making runtime of 27 hours and 25 minutes by nearly an hour, assisted by largely empty roads resulting from people staying at home during the coronavirus pandemic. 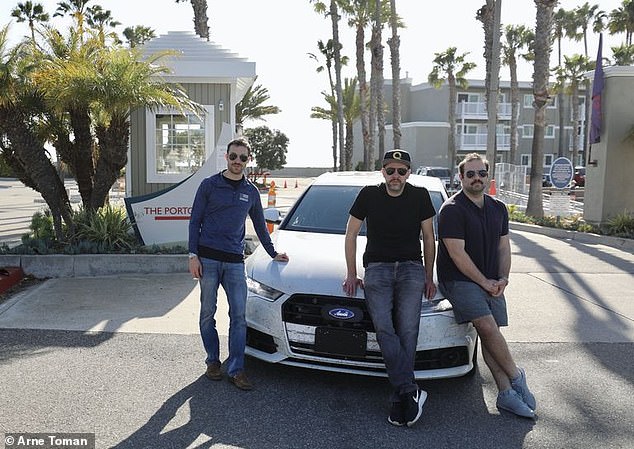 +11
Drivers Doug Tabbutt (left) and Arne Toman (center) are pictured with spotter Dunadel Daryoush (right). They broke the Cannonball Run record in May with a time of 25 hours and 55 minutes, driving from NYC to LA 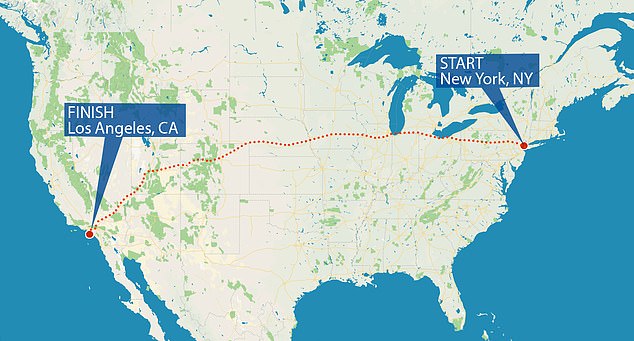 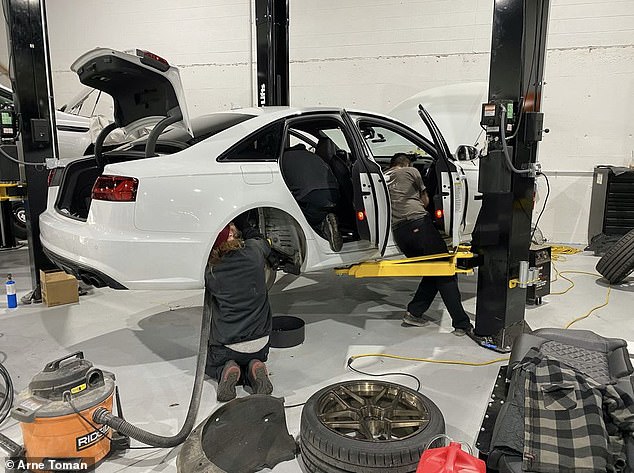 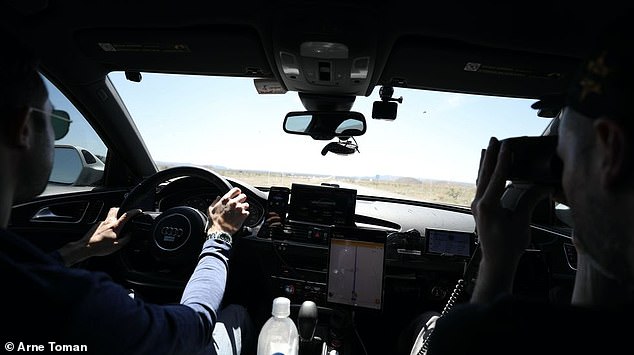 +11
A shot taken while the three men were making their record-breaking drive across America
Since setting the previous record, Tabbutt and Toman said five other Cannonball Run records were set, also helped along by pandemic-induced empty road. In June, Fred Ashmore made the drive alone in 25 hours and 55 minutes.
Tabbutt and Toman beat that time by 16 minutes.
The pair made the journey alongside navigator and police spotter, Dunadel Daryoush, in a 2016 Audi S6 which had been modified to look like an unmarked Ford Taurus Police Interceptor.
To help masquerade the Audi sport sedan's proportions, Tabbutt and Toman reshaped the front grille and even added a decoy Ford badge. They also added a 45-gallon, trunk-mounted fuel cell to help reduce the need to refuel the car during the trip, according to Road & Track.
Because the Cannonball Run famously has no rules and involves drivers breaking speed limits and other traffic laws, the three men only informed a handful of friends and assistants strategically scattered along the cross-country route about their departure ahead of time. 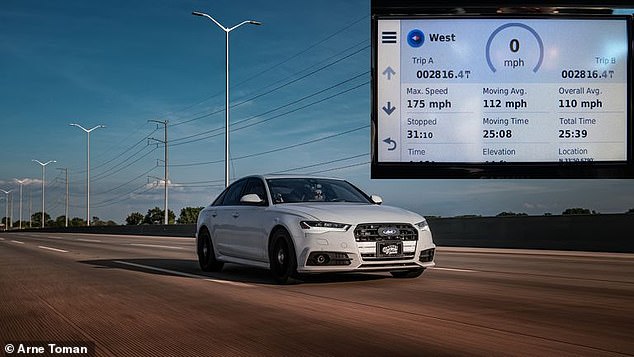 +11
The duo's Audi S6 is pictured on the road, while stats from the drive (inset) show their maximum speed reached was 175mph and their overall average speed was 110mph 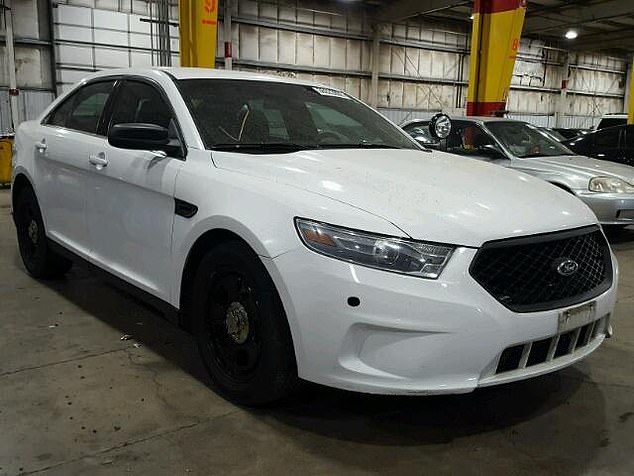 +11
The pair camouflaged their sports sedan to resemble an unmarked police car. An actual 2013 Ford Taurus Police Interceptor is pictured here
They started the drive at Manhattan's Red Ball Garage - the Cannonball Run's traditional starting point - at 6pm, zooming off hours before the usual pre-dawn departure time.
Tabbutt told Cleveland.com that the benefit of the early start was that they were able to use the cover of night to drive through the Midwest and maximize their speed in the darkness.
About 12 hours after they left New York City, they 'saw the sunrise in Colorado as we approached Denver,' Tabbutt said.

Tabbutt and Toman used the same route that they took during their November 2019 record-breaking run, filming it along the way to help provide proof of their feat.
It was smooth sailing, thanks to the car being kitted out with radar detectors, police scanners, binoculars and other devices used to help fly beneath authorities' noses.
They also relied on assistants along the way, who were prepared to take speeding tickets for the team when it seemed like Tabbutt and Toman might get stuck behind state troopers, which would slow them down considerably.
They did have a few near misses along the way though.
In Iowa, they said that the car started to vibrate, which Tabbutt suspected was due to the tires having worn out. Toman, who had been sleeping, suggested that the car's automatic 'lane departure assist' had taken over the steering. They managed to turn off the feature after about 10 minutes.
There was also a potential run-in with police in Colorado, near the border to Utah, after someone reported a speeding vehicle. It turned out that Tabbutt and Toman had already passed by the state trooper involved in the police scanner discussion, though.
Apparently the biggest issue they faced during the trip was when one of their strategically-placed assistants forgot to fill the car's main gas tank at a fueling stop, only doing the auxiliary tank. That delayed the trip by about seven or eight minutes, the duo said.
Tabbutt and Toman appeared to make it to the finish point at Los Angeles' Portofino Hotel and Marina without any further issues.
Previous Cannonball record hold Ed Bolian, who helped plan their route, played a part in verify the Tabbutt and Toman's new record.