Gun Trucks....Not just an American thing...the Soviets did it in A-stan


This gave me a chance to pick my Dad's brain again,  on his experiences 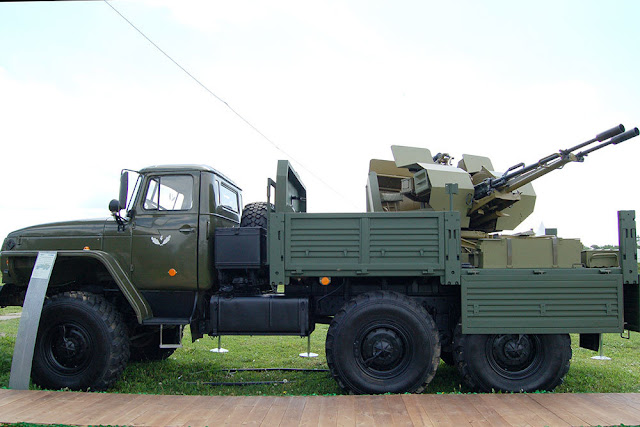 When somebody says “Gun Truck”, one tends to think of the improvised US designs from Vietnam. However, the Soviet Union found its troops facing similar problems with route protection during their abortive war in Afghanistan, with the additional problem that enemy forces were often located on steep hillsides where Soviet tanks could not elevate their guns enough to engage – a consequence of their low silhouette. Soviet units developed a number of expedient “gun truck” vehicles such as this one, with improvised sections on armor protecting the cab and what appears to the part of the hull of a (presumably) wrecked BTR APC on the rear flatbed. For some extra firepower, a helicopter rocket pod has been mounted on top of the turret – while one doubts it would be accurate, it would certainly have had a suppressive effect on anything on the receiving end.

I saw this on Farce book and decided to make this a blog post. I had spoken with my Dad who rode a lot in the convoys as part of his job as an CID investigator.in 1968. He also told me that they would use Gun trucks in the convoys and they were very effective and the people in the gun trucks would watch the people in the rice patties while they were farming see them drop their farming tools then scoop up their AK's out of the mud and start shooting or dive into the mud and know that an ambush was fixing to happen. He also said that the best place to be was right behind the lead jeep, the VC/NVA would never bother the lead vehicle, they would go after the tankers first, they burn better. The VC/NVA knew that they only had 2 to 3 minutes to cause mayhem before the air support would arrive because air support was always on call. The favored weapons of the VC/NVA was the RPG-2 followed by the RPG-7 using HEAT rounds The RPG-2, they called it the B-40 or the B-50 which was supplied by the Chinese and the RPG-7 supplied by the Soviets. The Americans also would strap claymores on the sides of the gun trucks in case they got swarmed, the Soldiers would hit the clickers and"Sweep off the Gooks" as the terminology went. It was a favored tactic for Charlie to hit the convoy because the convoys supplied the various firebases. He also told me that one of the favorite vehicles to have in a convoy was this bad boy... 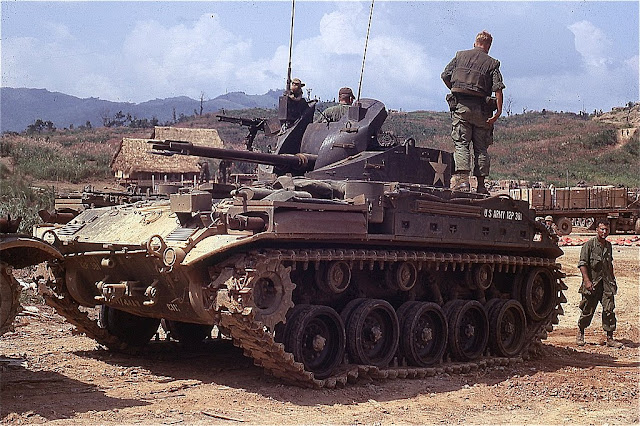 M-42 Duster
Max rate of fire 240 rounds a minute both tubes(336 rounds stored) plus an M-60 7.62 machine gun, it worked exceedingly well against people that were pajama thick in the armor department. Another favorite vehicle was the V-100 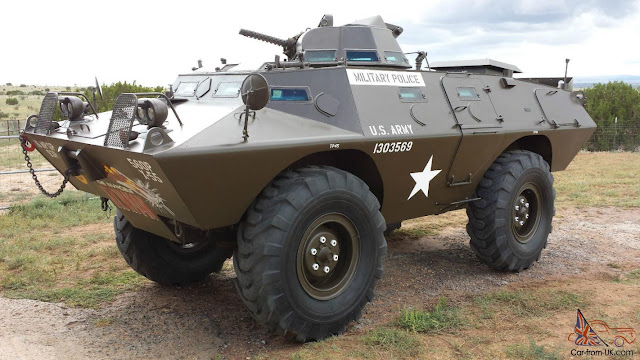 Like I said, I enjoyed picking my Dad's brain, he also shared some of the cases he worked, All I can say is "Dayam". 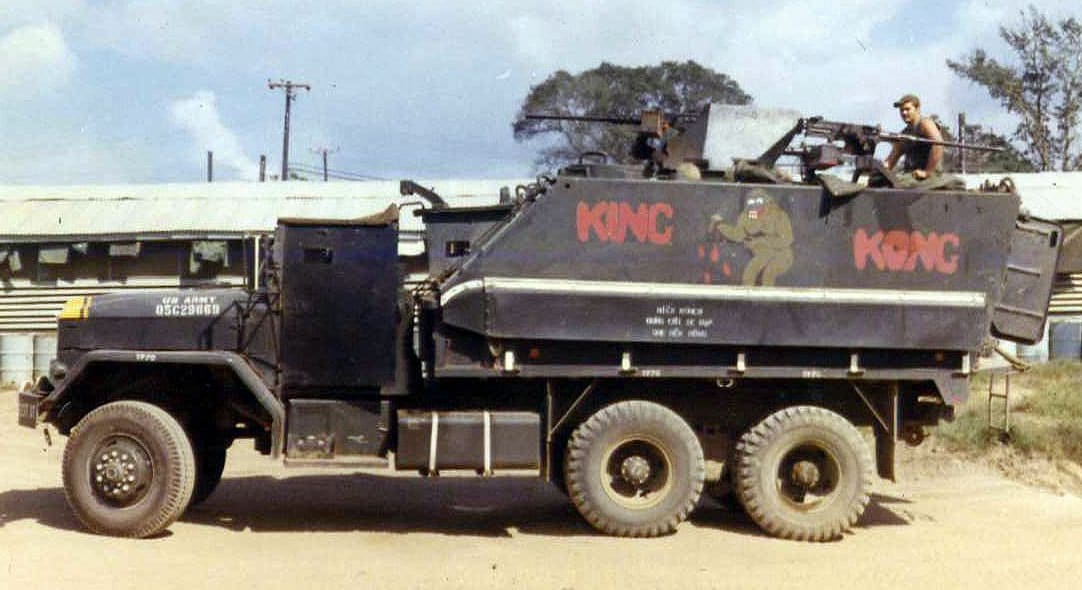 Part truck, part APC, all King Kong.
A largely forgotten part of the war in South East Asia was the one fought by the U.S. Army’s gun trucks as part of convoy operations through the heart of enemy territory.
While Hollywood would tell you everything moved by chopper in Vietnam, the hard fact of life was that it was truck convoys that schlepped the bulk of the food, fuel and ammo to American and allied units stationed in the countryside. However, these predicable routes became target for enemy ambushes.
One of the worst supply runs was that along Route 19, some 150 miles of winding nowhere that became known as “Ambush Alley” for the motor transportation guys having to make the drive.
The response: hit the scrap piles and, using salvaged steel, sandbags and anything else they could find, up-armor Deuce and a Half and later 5 ton trucks then pile on whatever ordnance they could mount. In some instances, this ran all the way up to entire M113 armored personnel carrier bodies.
While these gun trucks look right out of Mad Max, they predated the movies by generations– and honestly were a magnitude of times better armed. While M60 machine guns and M2 “Ma Deuce’s” were popular, quad .50 Maxson M45 mounts known as meat choppers,
Then of course there were mini-guns , which depended on vehicles  which are always good for breaking up ambushes from guys whose ballistic protection was only pajama-thick. but on the lighter vehicles would vibrate so bad would shake the vehicle apart.by breaking the welds.
The only known remaining Vietnam-era gun truck is Eve of Destruction, which was shipped back to the states before the fall of Saigon and is now restored and on display in the Army Transportation Museum at Fort Eustis, Va.
However, the Museum has an online record of more than 90 of these trucks at their website, where the bulk of these images are from.
Of course this concept was later rebooted in later U.S. military experiences in Southwest Asia— but that is the subject of another post. 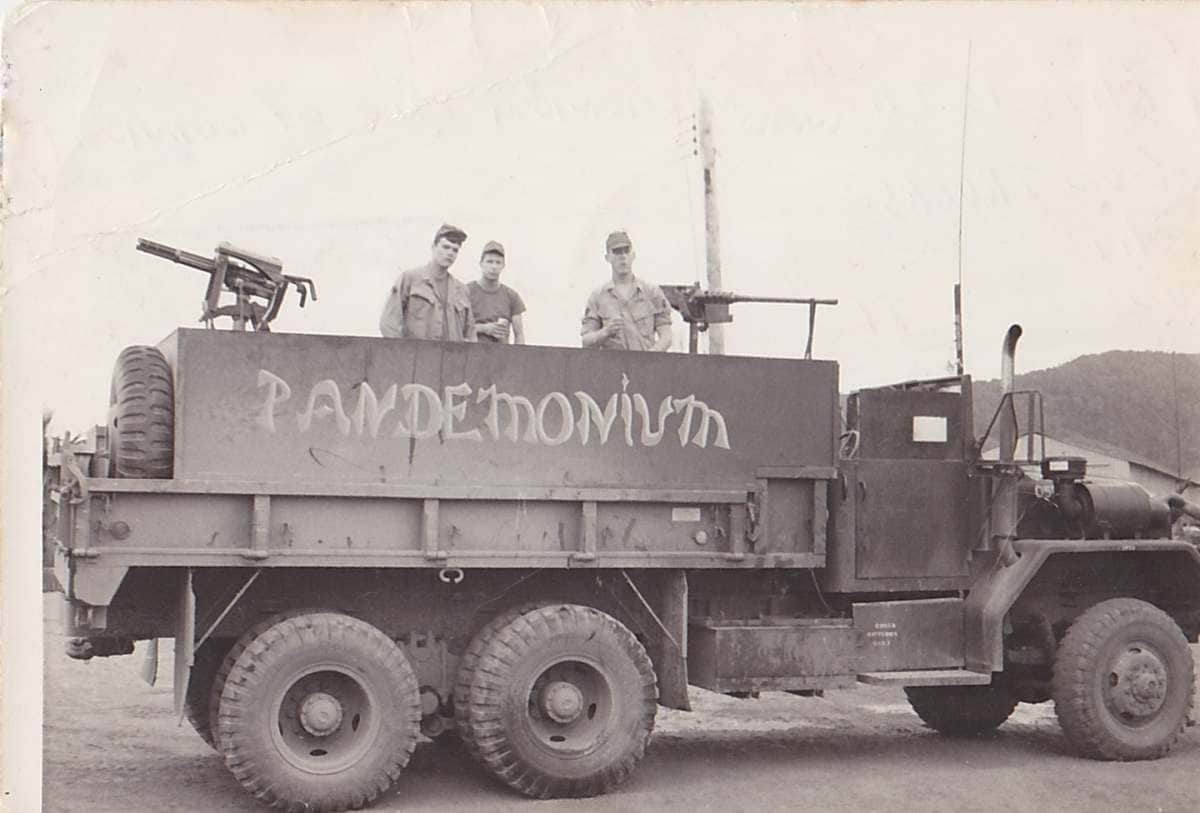 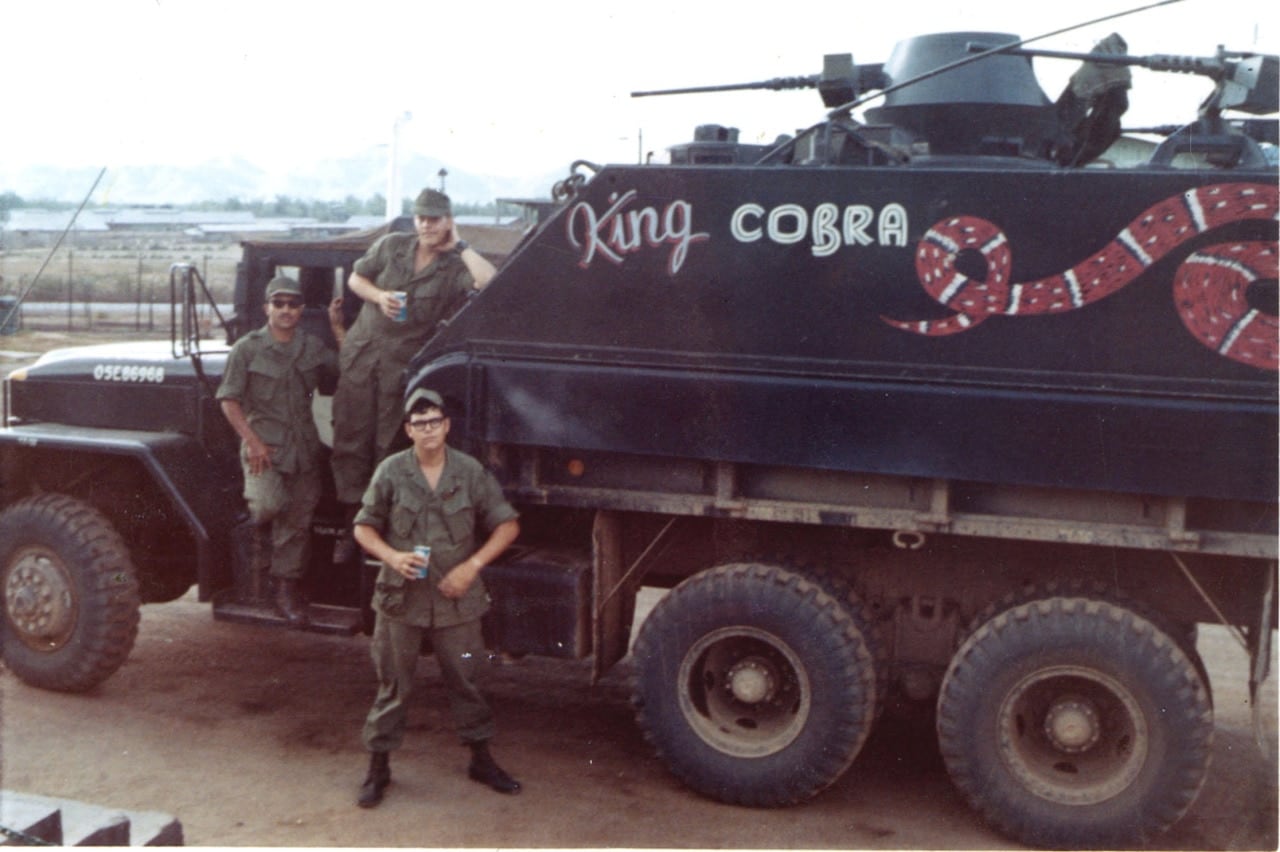 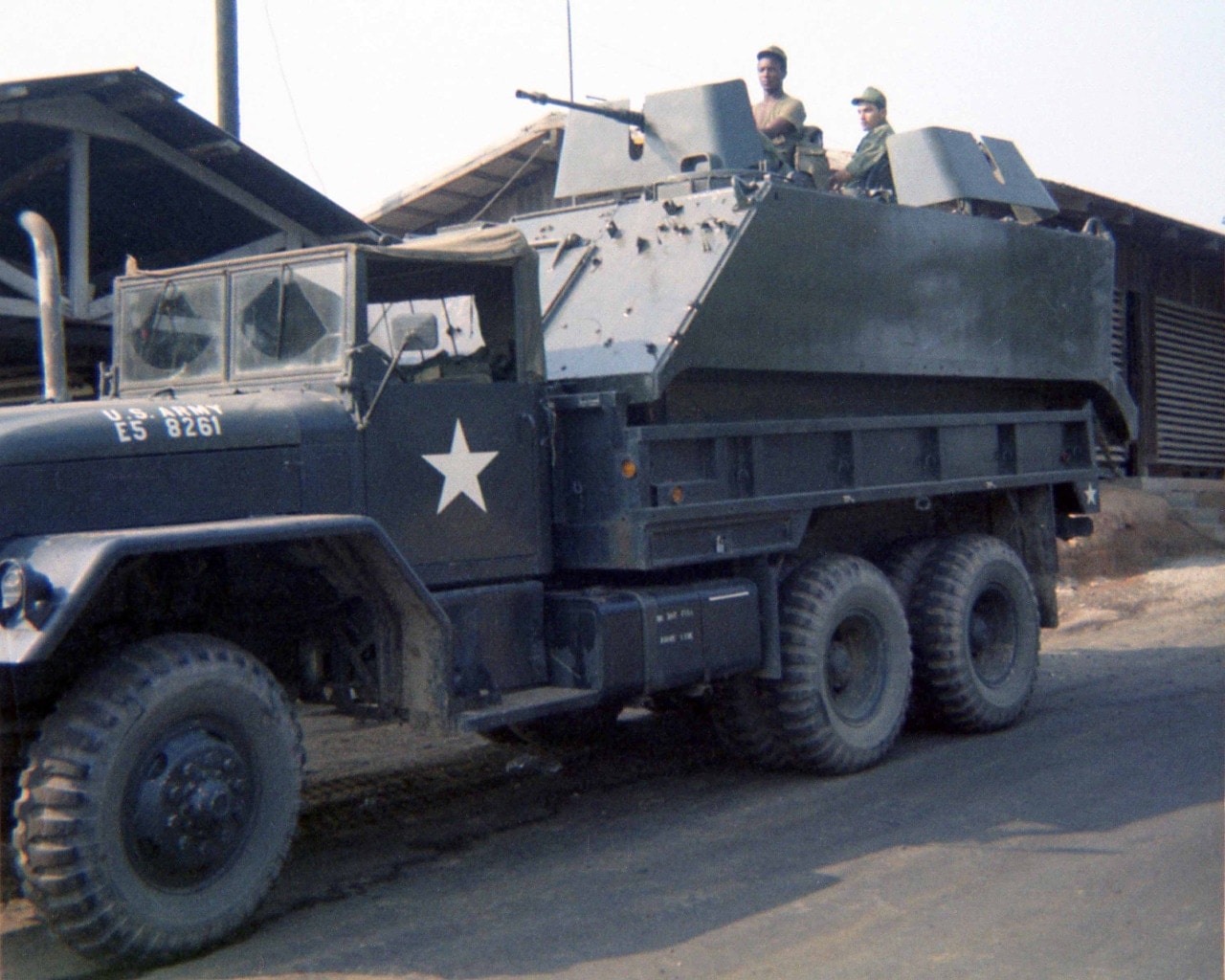 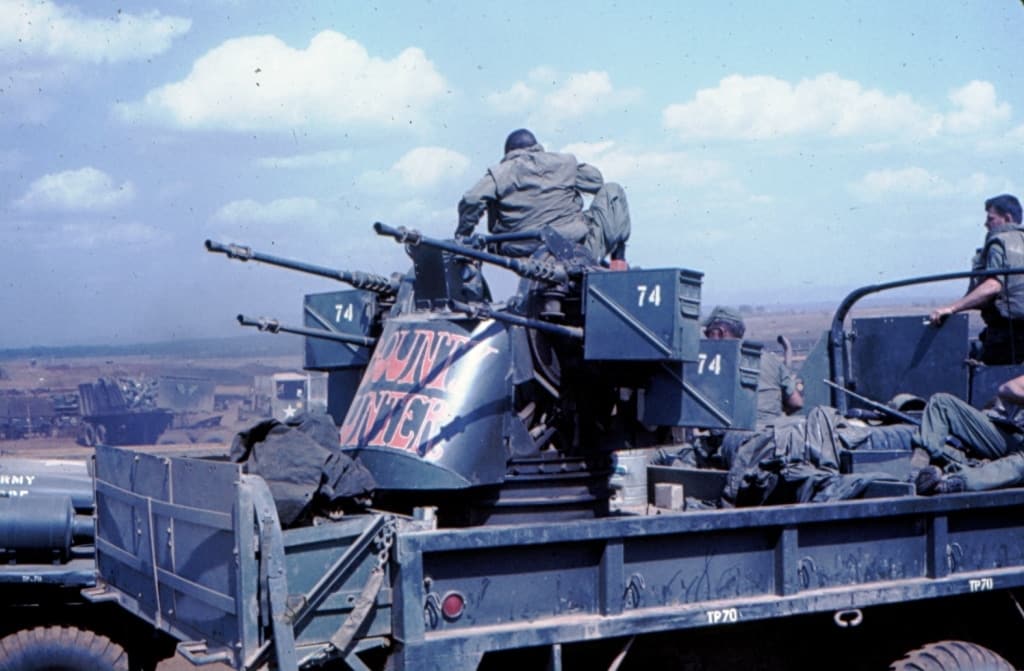 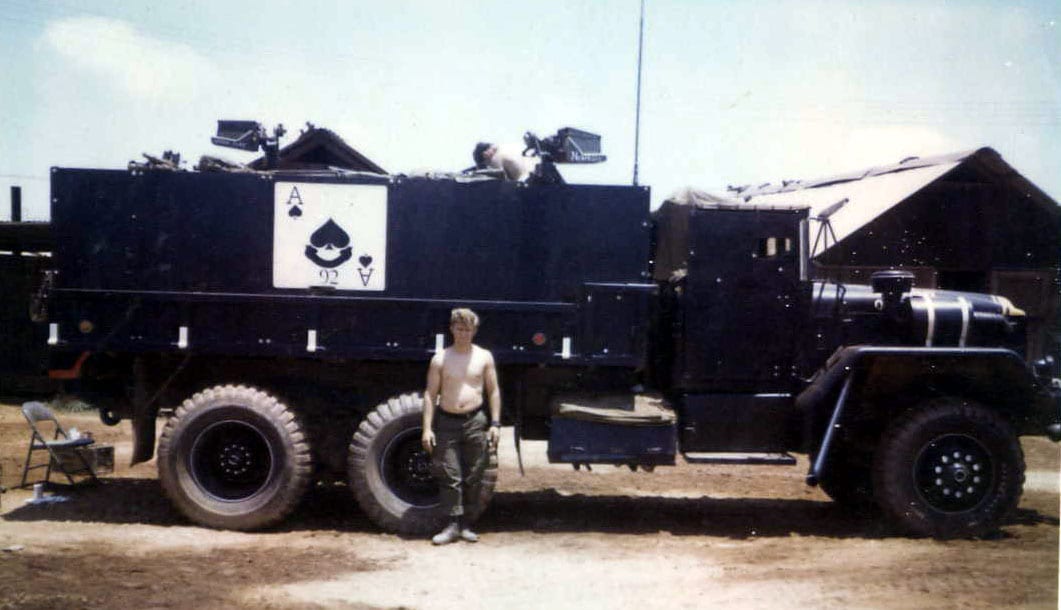 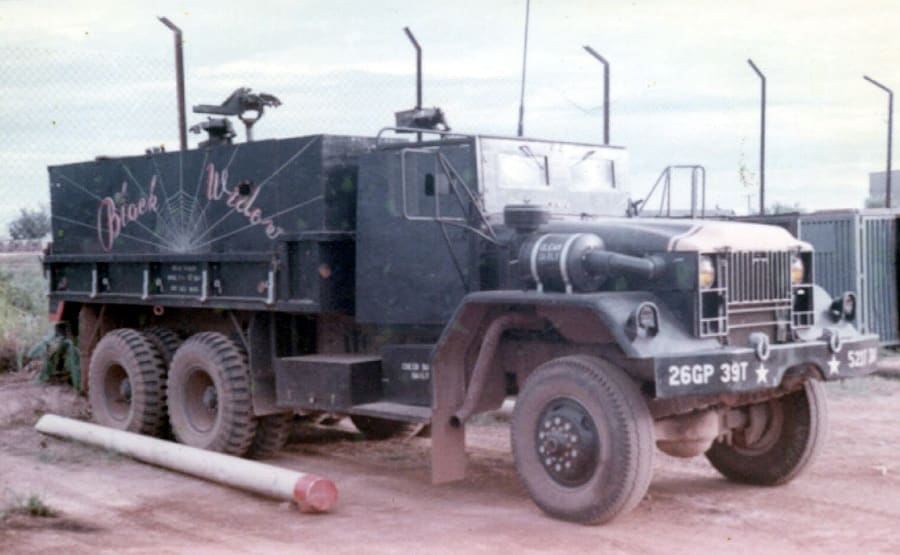 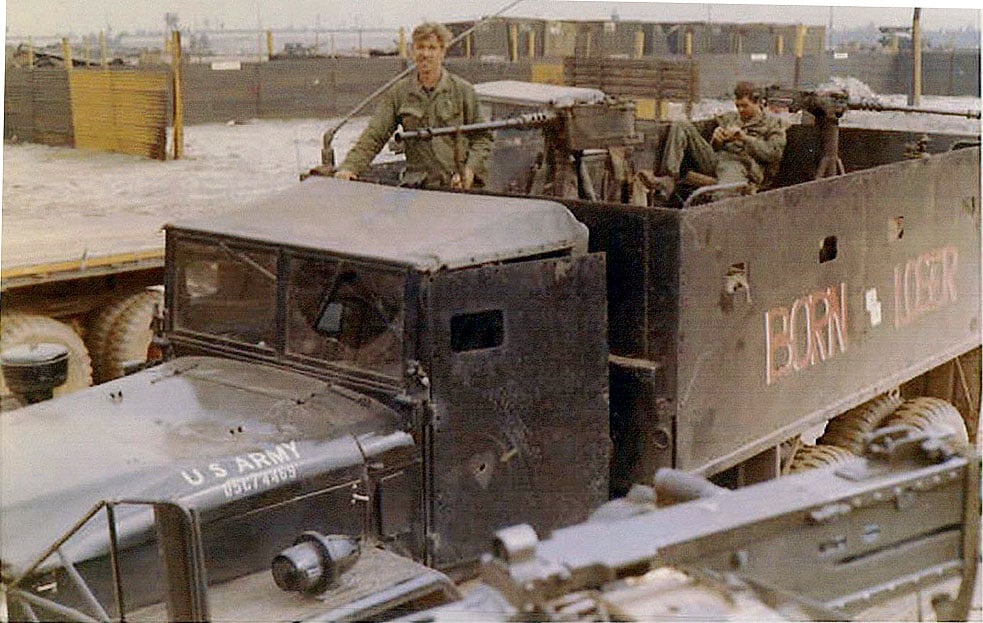 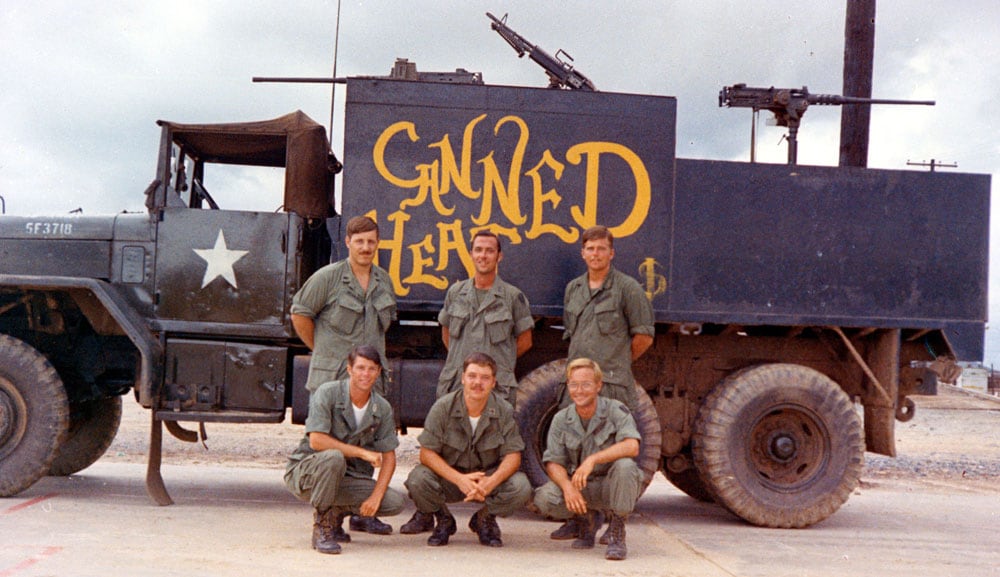 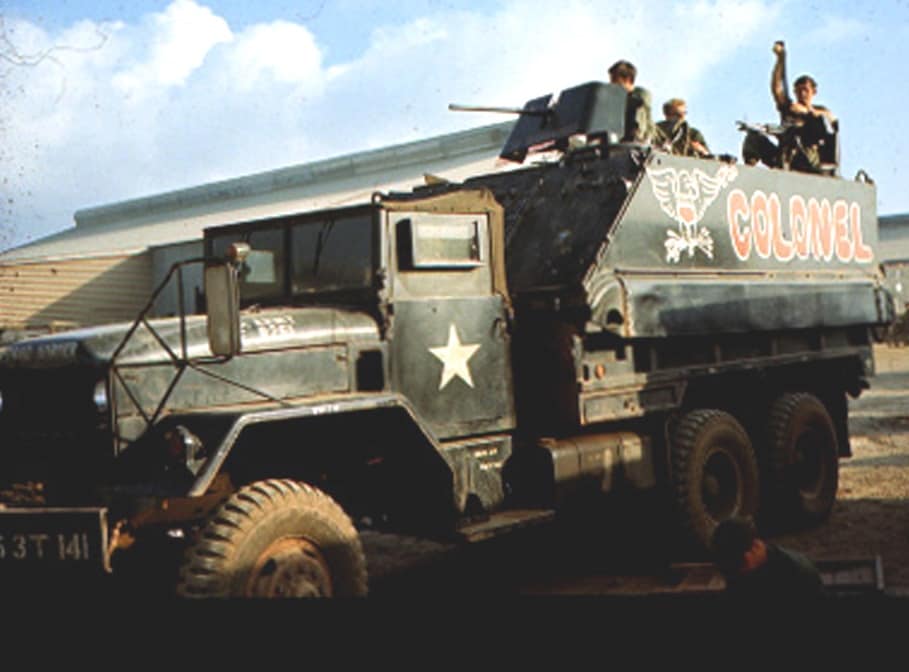 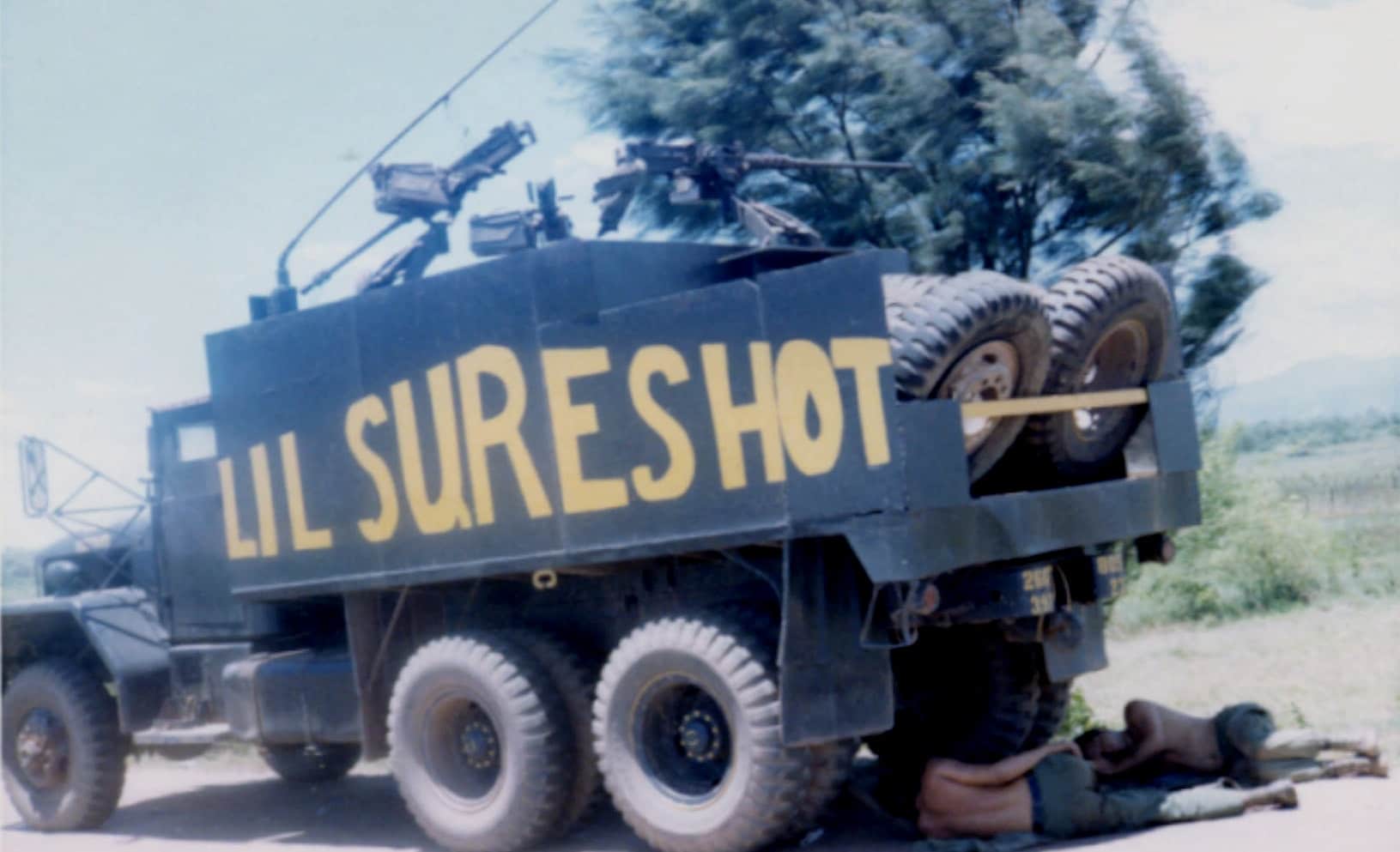 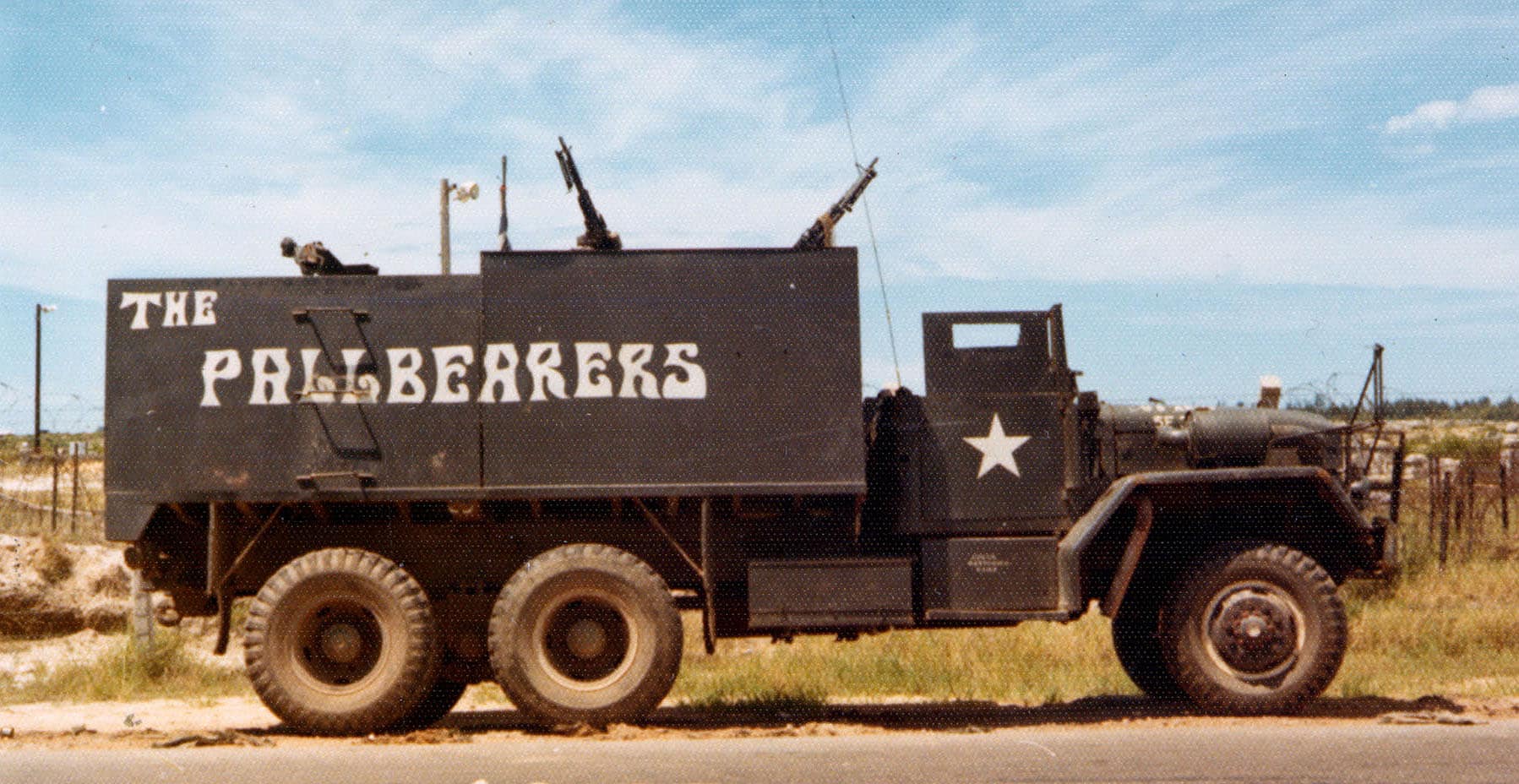 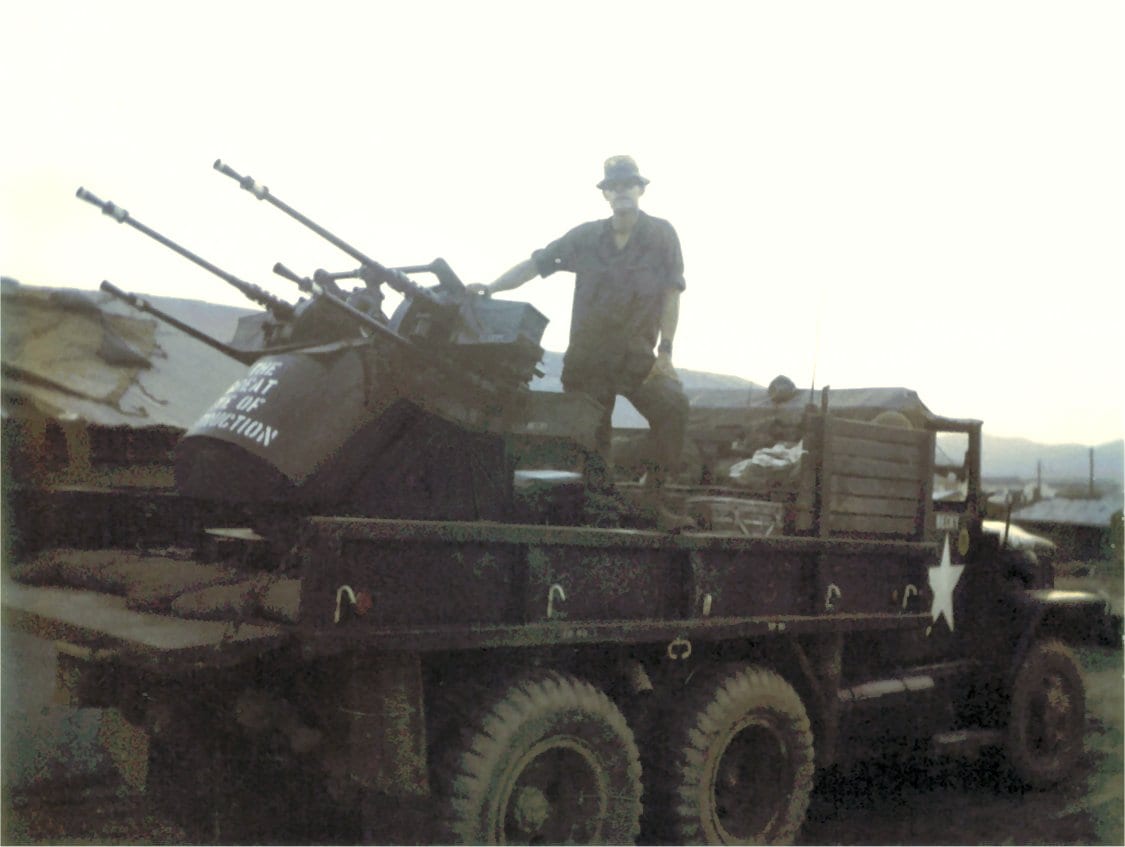 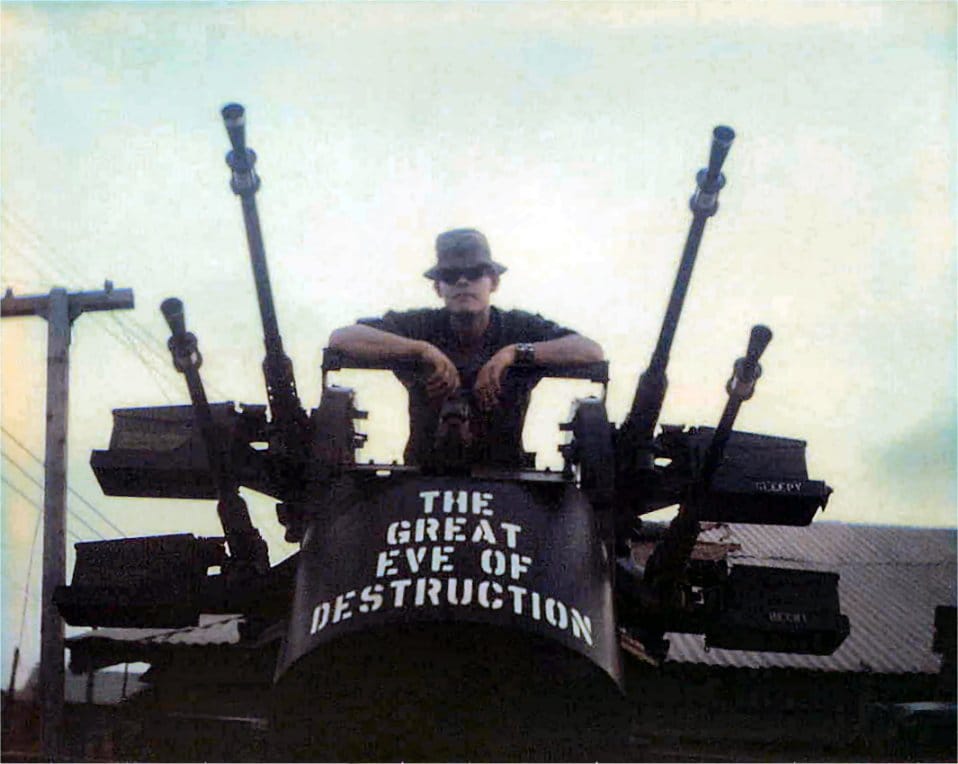 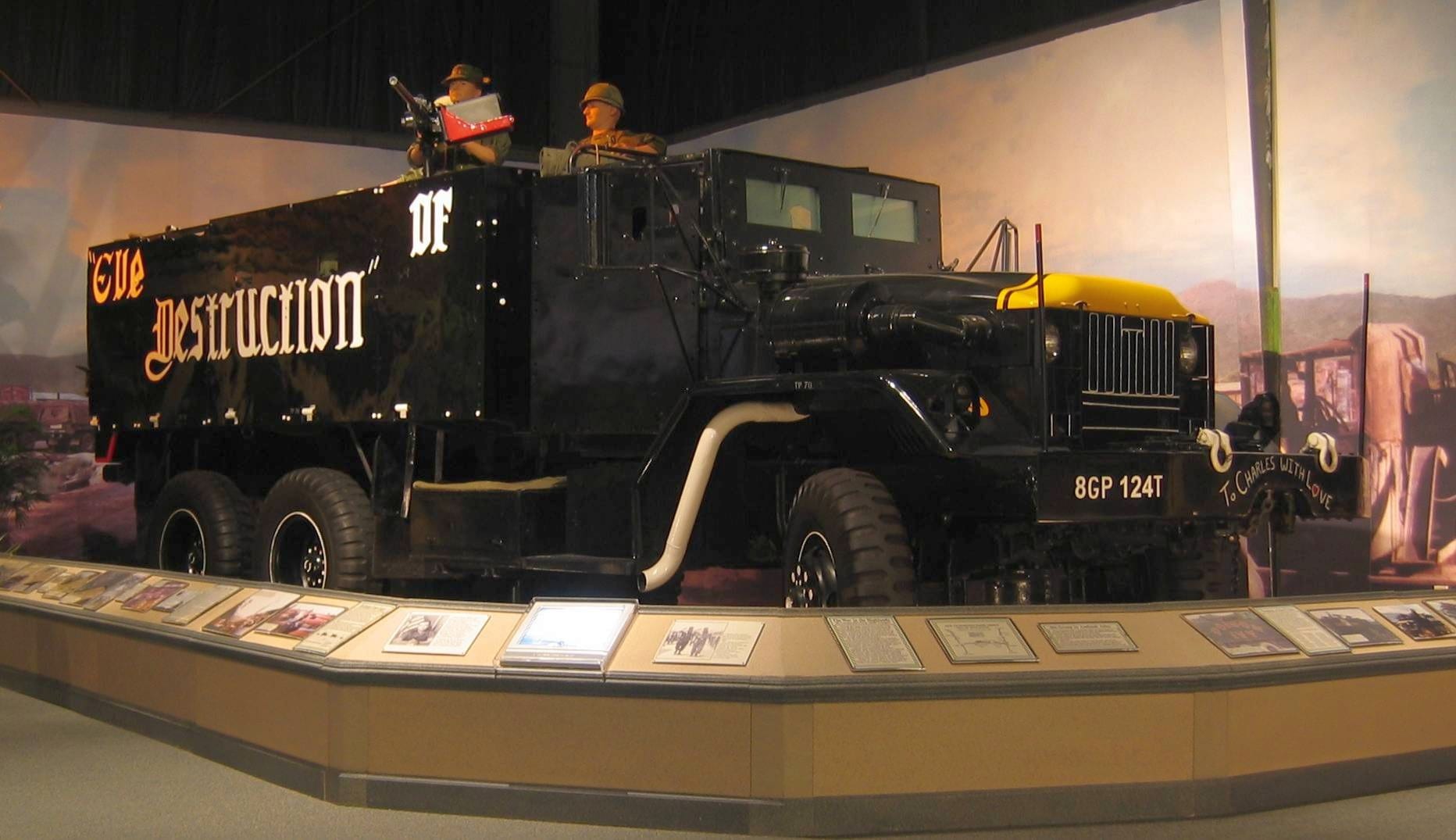