I have posted about the 2nd Chinese Aircraft Carrier, China has been flexing their muscles for the past 20 years, they view themselves and the 21st century as "Their" century.  You throw in communism  with a huge helping of mandarism and you get the modern Chinese government.  They look at the long road and they want to avenge slights from centuries past.  Also they want to expand their economic reach, far beyond their borders.  They flat own ports in the United States, huge swaths of Africa and Asia outside of Mainland China, and they have been building manmade island for their military to lay claim to the resource rich South China Sea.  They have been arguing with the Philippines over the Spratley Island, and they have their eyes on Taiwan, and with the Xiden Whitehouse in thrall to the Chinese, the Taiwanese are swinging in the wind, and they know it.  We have seen how they have treated the people of Hong Kong despite treaties to the contrary.   Life is cheap over there when you are a vassal of the state. 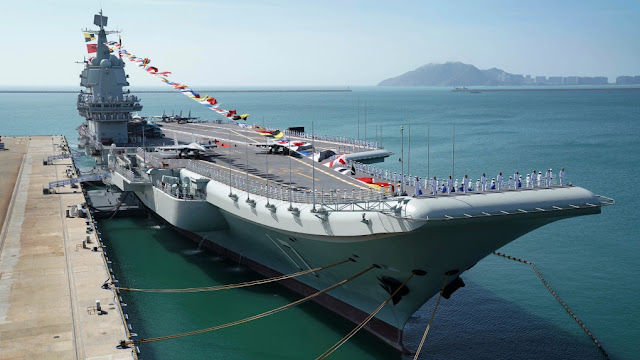 An aircraft carrier group led by China's second aircraft carrier, the Shandong, is conducting a series of exercises in the South China Sea in its first known voyage of the year, almost immediately after the country's first carrier, the Liaoning, left the region, and Chinese analysts said on Sunday that the move highlighted the fact that the two aircraft carriers that China currently operates are actively training for combat preparedness.

The Chinese People's Liberation Army (PLA) Navy recently organized the Shandong aircraft carrier group for exercises in waters in the South China Sea, Senior Captain Gao Xiucheng, a spokesperson from the PLA Navy, said in a statement on Sunday.

The drill is a regular series of exercises organized based on the annual work schedule, and is fully legitimate and legal, Gao said, noting that it will contribute to boosting the service's capability to safeguard China's sovereignty, security and development interests as well as regional peace and stability.

"We hope the outside world can view [the Shandong's exercise] objectively and rationally. The PLA Navy will continue to organize similar exercises according to the plan regularly in the future," Gao said.

This is the first time the Shandong has embarked on exercises made aware to the general public in 2021, observers said.

The spokesperson said that the Shandong is in a group, and this means the aircraft carrier could practice coordinating with other vessels including destroyers and frigates like in real combat, instead of acting alone and testing its own technical parameters like during trial phases, the expert said.

Gao did not announce which ships other than the Shandong are included in the group.

Analysts pointed out that the Shandong's latest exercises come immediately after the end of exercises by another Chinese aircraft carrier, the Liaoning, also in the South China Sea.

The Liaoning carrier group recently conducted routine drills and training in waters around Taiwan and related waters in the South China Sea, Senior Colonel Wu Qian, a spokesperson at China's Ministry of National Defense, said at a regular press conference on Thursday.

According to Japan's Ministry of Defense Joint Staff, the Liaoning left the region as it had returned to the East China Sea on April 26 via the Miyako Strait.

Having two aircraft carriers means the PLA Navy can deploy these large warships more often, according to the anonymous expert, who noted that when one undergoes maintenance, the other can take its place.

The recent, consecutive exercises by the Liaoning and the Shandong show that China's aircraft carriers are actively training for combat preparedness in order to deal with any potential threat the country is facing, analysts said.