Monday Music "Hold Your Head Up" By Argent.

I figured it would scar the alphabet boys if they come busting in and hearing a song about people standing for their beliefs and willing to fight for them no matter the cost, Good Music  unlike that crap they listen to now.  What can I say, My humor is warped....just a bit. Next week will be "I Feel Love" by Donna Summer,  Now that should really cause some psych evals., hehehe, some poor ATF guy trying to explain the attraction to his mother because he is imaging himself as The savior of the American way rather than working for an agency that have the initials of a convenience store.  Now because we ain't gonna answer that door.  They can kick it in and start "the Dance"

I decided to go with "Argent" Hold your head up high.....I like the instrumentals in this song and it is a good driving song to listen to. 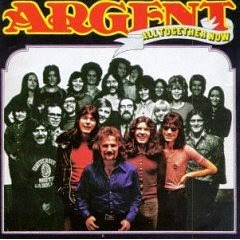 All Together Now, released in 1972, was the third album recorded by British rock band Argent. It was Argent's first hit album and features their most successful single "Hold Your Head Up," which reached number five in both the U.K. and U.S. singles charts. Other featured songs include "Tragedy," "I Am the Dance of Ages" and "He's a Dynamo."The 1997 compact disc re-release of All Together Now by KOCH Records features an additional seven tracks not included on the original seven-track vinyl record. The bonus tracks include "God Gave Rock and Roll to You", one of Argent's best-known songs due to the popular cover/remake by Kiss. In 2009, for their reunion, Mr. Big recorded a cover of "Hold Your Head Up" and played it throughout the tour. Uriah Heep also covered the song on their 1989 album Raging Silence.In the Q & Mojo Classic Special Edition Pink Floyd & The Story of Prog Rock, the album came thirty-third in its list of "40 Cosmic Rock Albums".Steppenwolf covered "Hold Your Head Up" on their 1982 album Wolftracks.
This video was done in the early/mid 70's in front of a studio audience.  The bad thing about using music from the early 70's and earlier is sometimes that there is a dearth of information about the video or more background because before MTV a lot of bands viewed music videos as a hassle and or superlative and didn't gather information on what they were doing.
Posted by MrGarabaldi at 4:00 AM