I shamelessly clipped this from "Security Studies Group", a Next Generation Think Tank.  I am still on full overtime and have little time for blogging, I still haven't had time to finish working on "My Precious" and get her running.  I will have time after next week, but until then, it is wide open.  It took me 3 days to get that "Dune" post up, mostly looking for pictures because I was looking for certain ones that would help tell a story.

Apparently the Attorney General wants to sic the FBI on parents that question their school boards decisions to go full tilt for "Critical Race Theory", and mask mandates.  Apparently "Our betters" don't like being questioned. 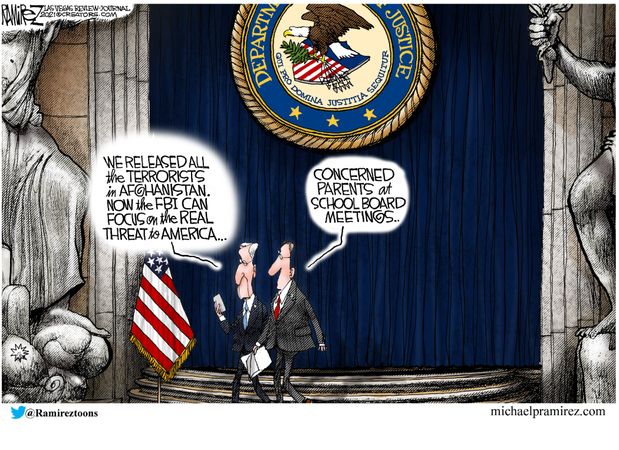 The Department of Justice is trying to shut down conservative parents from changing the policies of school boards. This is an obscene anti-Constitutional abuse and they qre now simply an armed intimidation wing of the Democrats and the Woke Left. They have been slipping away from law enforcement for over a decade, but the latest effort to chill political participation is a bridge far too far.

They released a memo designed to scare anyone considering protest against the Woke agenda and racist Critical Race Theory CRT.

Citing an increase in harassment, intimidation and threats of violence against school board members, teachers and workers in our nation’s public schools, today Attorney General Merrick B. Garland directed the FBI and U.S. Attorneys’ Offices to meet in the next 30 days with federal, state, Tribal, territorial and local law enforcement leaders to discuss strategies for addressing this disturbing trend. These sessions will open dedicated lines of communication for threat reporting, assessment and response by law enforcement.

There have been no instances of real violence at any school board meetings but the petty tyrants who are used to total control don’t like to be questioned. The National School Board Association sent a letter to the Biden team who is all too happy to get any excuse to crack down and criminalize conservatism.

This is a further extension of the Biden attack on political opponents.

The Biden administration just released a “National Strategy for Countering Domestic Terrorism.” It calls for abuses of state power to combine elements of totalitarian government with social and cultural engineering. They decided the Constitution and those pesky old individual liberties won’t stop them from making America the Wokest Place on Earth.

It is such an obvious attempt to try to crush political dissent, you wonder if they thought no one was paying attention. If you aren’t, you need to be, because this is marching orders for a whole-of-government approach to crushing Democrats’ political enemies. They are banking on the natural instinct of most Americans to oppose terrorism by branding some constitutionally protected practices “domestic terror.”

This is a stunning assault on free speech and free association. They want to make opposition to Wokeness a crime. This is why I wrote Winning the Second Civil War: Without Firing a Shot. They will take away all of our freedoms unless we fight back.
The time is now!

Jim served in US Army Special Forces and conducted Counter-Terrorism, Counter-Insurgency as well as Diplomatic, Intelligence and Humanitarian operations in more than a dozen countries. He is the author of Cut Down the Black Flag – A Plan to Defeat the Islamic State, and has appeared on Fox News, CNN, MSNBC, ABC, BBC, Al Jazeera, Deutsche Welle, C-Span, and numerous national radio shows.

Posted by MrGarabaldi at 9:25 PM