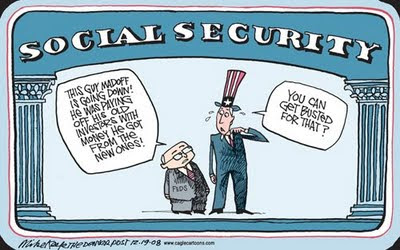 I'm not talking about anyone retiring at thirty even though I tried to hook you in with that headline. Instead I'm talking about the thirtieth anniversary of a social security system that actually works and (unlike the one we suffer with in the USA) will never go bankrupt.

I'm talking about a successful government system which is not a Ponzi scheme but a retirement savings plan that the people actually own and which has a rate of return which makes the US Social Insecurity system's (merely theoretical) return look pitiful by comparison.

This year, on May 1st, Chile celebrated the birth of it's privatized Social Security System. They were the first of some thirty other rational countries to "just say no" to government Ponzi schemes which were headed for default and say yes to a privately held, government regulated retirement system that has not only out-performed all expectations but befuddled the leftist naysayers who cannot stand the idea that any system that isn't administered by elite government central planners can succeed in aiding ordinary people in providing a great retirement for themselves.

According to an article in the http://www.investors.com/
"In 2005, New York Times reporter John Tierney worked out his own Social Security contributions on the Chilean model and found that his privatized pension would have been $53,000 a year plus a one-time payout of $223,000. The same contributions paid into Social Security would have paid him $18,000."

The return on investment since inception for the Chilean system; "Over the last three decades these accounts have averaged annual returns of 9.23% above inflation. By contrast, U.S. Social Security pays a 1% to 2% (theoretical) return, and even less for new workers."

Of course as any even semi-informed citizen of this country knows, there is no Social Security Fund with any real assets in it for American people. The money has already been spent buying votes from the people who put the money in in the first place. The "Fund" is just an accounting device "account" full of government IOUs promising to print enough paper dollars to satisfy the claims of those who have paid in all their lives. (Until 2037 anyway, when even those Tooth Fairy promises also run dry.)

As part of the law the people in Chile actually own their own accounts as private property, just like your 401k or IRA accounts in this country.

In a world where American "progressives" are constantly comparing the US to other countries to see if they can find a way to denigrate our way of life, they forgot to compare us to the thirty-ish other countries who have come to their senses and left America in the dust on this one.

It's enough to make you wonder what the climate is like in Chile.
Posted by MrGarabaldi at 11:02 PM