I have heard rumbling that the gov't is considering seizing the trillions in private retirement accounts to help cover the massive deficits.  And I am surmising that they will cloak the language in the class warfare that the democraps love" the filthy rich is keeping their money and we need to distribute it in the name of fairness".  And since there are more people that depend on the gov't for money and food, the "have nots" will look favorably on such actions since it will benefit them in the long run since it keeps their pet entitlements funded.
Ireland is talking about a small tax for 4 years.....Have you known a gov't tax to sunset?   Income tax was supposed to end after WWI, well it is still here.  The gov't gets used to the income stream and it will be permanent.  I would be furious, my wife and I have scrimped for years to fully fund our retirement since we have the belief that social security will not be there when we get old.  The politicians after spending us into bankruptcy by plundering social security and burdensome entitlement programs, will then take my hard earned money to keep funding the freeloader society that is prevalent today and that seems to be a core democrap support bloc.
I got this from here

Would such a seizure finally get the American people to realize that they are the the vassels of the state and not the masters?

Treasury Secretary Timothy Geithner is ringing alarm bells across Washington, D.C., warning of a disastrous outcome if an agreement to raise the debt ceiling is not made soon. “A default would call into question, for the first time, the full faith and credit of the U.S. 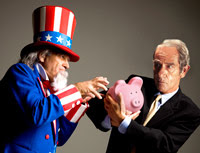 After weeks of such warnings, the United States has hit its $1.43 trillion debt ceiling hard. In response, GOP leaders have demanded cuts in federal spending equal to any increase in the limit while maintaining a strong line against tax increases.

As Congress squares off over a debt ceiling vote, Treasury is scrambling to find cash in the couch cushions. One of the ways it will scare up extra money is by putting off saving for the retirements of federal workers — in effect, short-term “borrowing” from public pension funds.

By suspending investments into the civil service retirement and disability fund, as well as putting off reinvestments into another big retirement bucket known as the G-Fund, Treasury could “claw back” up to $202 billion, estimates Reuters. That sounds like a lot, but it’s just 10 percent of the $2 trillion the agency says it needs to stay afloat until after Election Day 2012, and it will have to be put back.

Holding off public pension payments could be cast as prudent short-term scrambling to avoid a serious problem with U.S. Treasury holders. Taken another way, such moves could instead be seen as the first step toward an eventual tax or outright seizure of private savings in tax-favored retirement plans.

It can’t happen here, you might say. But it has happened in plenty of indebted countries, such as Argentina and Hungary, and it just happened last week in Ireland. Hungary seized $14 billion from private pensions, reported The Christian Science Monitor, while Bulgaria and Poland demanded partial government control of private savings.

Posted by MrGarabaldi at 1:06 AM