This is what happens when we don't screen refugee's that come here.  they come here then try to turn our country into the same shithole that they left.   When immigrants come here, they need to assimilate into American culture.  instead they keep their own language, customs and beliefs and expect us to respect their customs when they do not respect ours.
Read details here 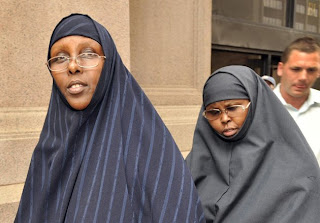 MINNEAPOLIS (AP) — Two Minnesota women who claimed they were helping the poor in Somalia were convicted Thursday of conspiring to funnel money to a terrorist group as part of what prosecutors called a "deadly pipeline" sending funds and fighters to al-Shabab.
After the verdicts, one of the women, Amina Farah Ali, told the judge through an interpreter that she was happy because she was "going to heaven no matter what," and condemned those in authority, saying: "You will go to hell." She was ordered into custody pending her sentencing.
Ali, 35, and Hawo Mohamed Hassan, 64, were each charged with conspiracy to provide material support to a foreign terrorist organization. Ali also faced 12 counts of providing such support, for allegedly sending more than $8,600 to al-Shabab from September 2008 through July 2009, while Hassan faced two counts of lying to the FBI.
Both were found guilty on all counts. The terrorism-related counts each carry up to 15 years in prison, while lying to the FBI carries up to eight years. No sentencing date was set, and prosecutors said it was too early to predict what sentence they'd recommend.
The women, both U.S. citizens of Somali descent, were among 20 people charged in Minnesota's long-running federal investigations into recruiting and financing for al-Shabab, which the U.S. considers a terrorist group with ties to al-Qaida. Investigators believe at least 21 men left Minnesota — home to the country's largest Somali community — to join al-Shabab.
Though others have pleaded guilty to related charges, the women were the first to go to trial.
The verdicts will likely lead to other guilty pleas, said Omar Jamal, first secretary of the Somali mission to the United Nations in New York. He also said it would be difficult for law enforcement agencies to rebuild the trust they had worked to establish with the Somali community.
Prosecutors had emphasized that the case was not about a community or a religion, but two women who deliberately broke the law.
Posted by MrGarabaldi at 11:33 PM

Email ThisBlogThis!Share to TwitterShare to FacebookShare to Pinterest
Labels: religion of peace