The DC-3 is a legend, I have ridden in one and count myself lucky to do that.  The plane is still flying today carrying passengers and cargo.  The running joke for DC-3 pilots is "The only way to replace a DC-3 is with another DC-3."  The airplane's ruggedness and reliability is legendary.  The plane revolutionized the aviation business and the passenger business.

Here in Atlanta, you can go to the Delta Museum and see the DC-3 and other aircraft that Delta airlines had owned.  If you are an aviation buff, it is worth the trip.  Admission is free, but you can pick up a lot of aviation goodies at the gift shop.   Check out link for details


Ship 41
Ship 41 is the only Delta passenger DC-3 left in existence. Delta is the only carrier known to possess its first new revenue-carrying DC-3. Restoration was completed in October 1999. The plane is housed in Delta's original 1940s hangars in Atlanta. Service History Ship 41 flew into Atlanta as the second delivered of Delta's first group of five DC-3s in late 1940. Delta's Ship 40 was being used for pilot training, so Ship 41 was the first DC-3 placed into Delta's scheduled passenger service, entering service on December 24, 1940.
Retired from Delta service after 18 years, Ship 41 was sold to North Central Airlines. Since then, Ship 41 flew for many owners. In 1990 there was an effort, led by Delta's retirees, to locate one of Delta's first five DC-3s. Ship 41 was discovered in Puerto Rico, registered as N29PR, and had been flying cargo with Air Puerto Rico. The aircraft was purchased in 1993 by Delta, and flown back to Delta headquarters in Atlanta, Georgia for restoration.
Awards
No other DC-3 in the world has been restored with such impeccable care and attention to detail. The restoration has received prestigious awards: In 2000, the DC-3 received the Judges' Choice "Lindy" award at the Experimental Aircraft Association's AirVenture OshKosh, the world's premier aviation event. In 2001, Ship 41 was the first aircraft ever to win a National Preservation Award from the National Trust for Historic Preservation.
Challenging Restoration Project
The enormity of the project can be understood when tasks such as the complete rebuilding of the cockpit had to be undertaken. The cockpit was brought up to 1990s standard without detracting from the original Douglas design or the period look of the aircraft. For example, instruments are all analogue but were uniformly painted, the radio and navigation and communications equipment were positioned discreetly and the seats, pedals, control column and control systems were all renewed. Modern fire and soundproofing insulation methods were used inside the structure of the cockpit and cabin area.
The galley and boarding ramp were rebuilt into exact 1940s replicas from old photographs in the Delta Air Lines Corporate Archives. The cabins seats were remade with the original 1940s patterns and fabric.
Parts Contributed
Donations to the restoration project included: Supply of zero-hour engines and accessories from JRS Enterprises in Minnesota. Landing gear and hydraulic valves from Basler at Oshkosh, Wisconsin. Radios from Collins. 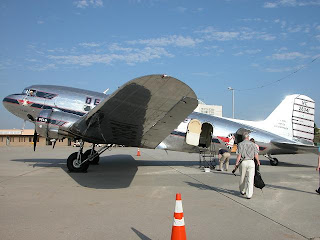 To relieve the pressure on the factory, Douglas sold the licenses to manufacture the DC-3 to three countries; Holland, Japan, and Russia. A royalty paid to Douglas for each aircraft manufactured was part of the license agreement. Tony Fokker never manufactured any DC-3s for Holland, but he distributed 63 before the war in Europe ended his operation. Fokker died of pneumonia complicated by meningitis a week before Germany invaded Holland.

Russia built as many as 20,000 Li-2s. Russia has never paid Douglas a cent in license fees. The PS-84 used the 900 hp Shvetsov M-62 engine (developed from the licensed Wright SGR-1820F which powered the DC-2) and the engine configuration gave the nacelles a narrower chord. Even after they upgraded the engines to 1200 hp ASH-62, the nacelle shape remained close to the first models...


THE JAPANESE DC-3
When the DC-3 came along, the Japanese immediately recognized its potential, especially since they had such great success with the DC-2. Great Northern Airways and the Far East Fur Trading Company (another Japanese military front company) purchased at least 21 DC-3s from Douglas between 1937 and 1939. The first intended for KLM as PH-ARA, but canceled, arrived in Japan on December 6, 1937. These transports were operated by Dai Nippon Koku and impressed into Imperial service during the war. The surviving transports were scrapped at the end of the war.

On February 24, 1938, a Japanese manufacturer, Mitsui (a subsidiary of Nakajima Hikoki), purchased the production rights and technical data to the DC-3 for $90,000. Unknown to the United States at the time, the sale was directed behind the scenes by the Imperial Japanese Navy (who was planning on using the type in the invasion of the East Indies).