I was over here reading a good Posting by Lisa
I was reading the comments and some person compared themselves to both the TEA party and the OWS crowd, well that kinda set me off, so I went on a tear.  Well the truth of it is that I like the rant i did on her website so I cut and pasted my rant  for my website. 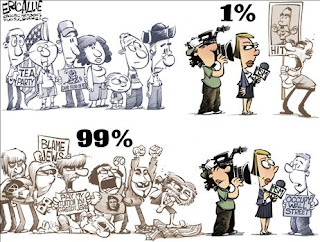 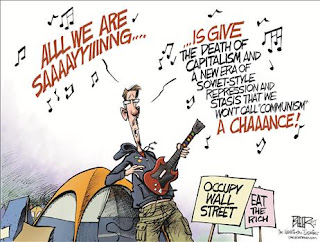 There are several differences between the Tea Party and the OWS crowd. The tea party are productive Americans wanting the debilitating debt run up by our Gov't to end and we restore fiscal sanity. The OWS crowd plays to the class warfare wealth envy stirred up by our dear Leader. The media is fawning over a bunch of mostly college students that believe the far left twaddle regurgitated by the college professors that espouse the discredited marxist teachings. Their attitude is "the right people havn't been in charge yet, we will get it right." All I see from the OWS crowd is forgive all college debt, These kids rang up 200,000 dollars on debt on a degree that doesn't mean anything. Nobody put a gun to their head and told them that they will get this degree in social science/basket weaving/wymen studies/minority studies or any of the other feel good stuff that has no value to an employer. You go to college to get a degree to prepare to enter the workforce as a valued employee. Well they choose poorly Now they want somebody else to pay the debt. I read their demands on the website, it is a wet dream of the far left that have no basis in reality outside of academia. These kids are supposed to be grownups but they still act like they are in middle school.
I also never heard any racist rants come from a TEA party rally( I have been to several of them) but I hear the racist anti semitic rants from the OWS. Also the crapping on the American flag and the police cars. TEA party people don't act that way, we respect the rule of law and we clean up ourselves, unlike the OWS crowd that is used for somebody else cleaning up after them... like their parents I guess. We TEA party members have caught hell and have been demonized by the LSM whereas the OWS crowd get a pass...Who is biased?. If you want to see the OWS in a nation state, look no farther than Greece, for years the Greeks have used the EURO to fund their socialistic programs and produce little, now the bill has come due and they have to take austerity measures because the other countries will no longer subsidize Greece, so they riot and burn things in their anger because the gravy train is coming to an end, like the OWS crowd. If the OWS crowd wants to protest the economic policies, go demonstrate at 1600 Pennsylvania Ave, that is where it originates from.
Posted by MrGarabaldi at 9:36 AM