Are polls skewed toward Democrats? 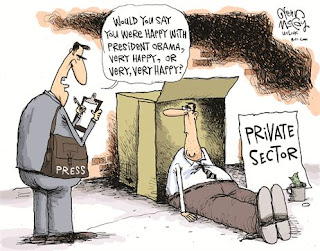 This article is compliments of the Weekly Standard

A topic that inevitably receives a lot of focus during election season is the partisan spread of the major media polls. Conservatives regularly complain that the polls are tilted against their side, and thus favor the Democrats.

They have a point.
To be sure, we can conclude that without accusing any pollster of malfeasance. In this essay, Mark Blumenthal of the Huffington Post correctly notes that the problem gets down to using registered voter polls. These tend to oversample Democrats.  The argument in support of them is that, while a likely voter screen would draw a larger Republican sample, it would create more variability as pollsters would be guessing unduly at the final party turnout.
That is a fair point in some respects, although there is a cost associated with either choice. Using registered voter polls might cut down on variability, but they also create statistical bias. That is, the polls tend to oversample Democrats in a systematic fashion. And because partisan support is so strong – with 90 percent of Republicans supporting GOP candidates and 90 percent of Democrats supporting Democratic candidates – you regularly see the Democratic candidates’ margins overstated in polls of registered voters.
Let’s see if we can quantify this a little bit. To begin, we need to know the historical partisan tendencies of the electorate. For that, we can turn to the exit polls going back to 1972.

As we can see, the GOP position suffered enormously because of the Watergate scandal in 1974. Republican identification among voters plummeted 10 points, not to rebound fully until Ronald Reagan basically rebranded the party in 1984.
Ever since then, we have seen both parties pull a relatively constant range of support. This actually pushes back against Blumenthal’s point that there is an undue amount of guesswork in terms of modeling the electorate. In fact, for five elections in a row – from 1984 to 2004 – the GOP fell within a very narrow, 5-point band between 34 percent and 39 percent. Meanwhile, the Democratic band was even narrower, from 37 percent to 40 percent.


Of course, 2008 seems to have broken the pattern. But what was really happening that cycle? The conventional wisdom among proponents of the “emerging Democratic majority” thesis is that this was the general election when the demographic power of the Democratic party was finally realized. But in fact we see the Democratic party still falling in that narrow range of 37-40 percent. The real drop-off comes with the GOP, and the “independent” category was the greatest beneficiary. What I suspect happened is that many marginal Republicans stopped identifying themselves as such in 2008, and instead called themselves independents. This argument is supported by the fact that Barack Obama only won the independent vote in 2008 by 8 points, which compares quite negatively to the 18-point blowout among independents that Democrats scored in 2008. This suggests that a lot of true Republicans were “hiding” in that category four years ago.
Thus, I do not see a substantial shift in the partisan balance within the electorate in 2008, at least not on net. Certainly, Barack Obama attracted a much larger number of the non-white public to the polls (especially African Americans), and he also drew a larger share of this vote than prior Democrats. But these gains were countered by significant declines in Democratic support among whites. Obama lost the white vote by 12 points; while in 1996 (an equally good year for Democrats) Bill Clinton lost it by just 3 points.
I also do not see much reason to alter substantially our expectations in terms of partisan turnout – certainly not in a cycle where most polls suggest an enthusiasm gap that favors the Republican party. The quarter-century trend (1984 through 2008) has seen an average Democratic turnout edge of 3 points, 39 percent Democratic to 36 percent Republican. I’d expect something roughly similar this time around.
This gives us a basis to compare the recent polls of registered voters. How do they stack up to this historical trend of D+3?

The clear answer is: they skew Democratic. In fact, every recent registered voter poll with party spreads I could identify had a Democratic advantage that exceeded the quarter-century trend. And the average of all these polls together is 35 percent Democratic to 29.5 percent Republican, or D +5.5
Importantly, these polls show Obama with an average lead over Mitt Romney of 3.5 points. But if they have a 2.5-point Democratic oversample, then what we are really talking about is perhaps a 1-point Obama lead.
Incidentally, this puts these polls much more in line with the Rasmussen poll, which has consistently found a toss-up race. Right now, Rasmussen – a poll of likely voters – sees an R+1.4 advantage in party identification. That is entirely defensible, in my opinion, given the weakness in the economy.
A final point: Presidential job approval polls are usually reported among all adults, aged 18 or over. These tend to have an even larger skew toward the Democrats than registered voter polls. For instance, the CBS News / New York Times poll had a D+6 spread among registered voters, but a D+7 spread among all adults. This means that the job approval numbers are probably overstating Obama’s position by an even larger margin. So, the CBS News / New York Times poll had Obama’s net approval at -2, suggesting that among the electorate it’s perhaps around -6. I’d link this back to my consistent argument that presidents rarely win a share of the electorate larger than their job approval to justify my sustained bearishness on Obama’s reelection prospects. I suspect that the Rasmussen poll on job approval is closest to the electorate’s true feelings, and that regularly shows a net disapproval around -5 points, a very bad position for any incumbent.
Here’s my bottom line. It is very difficult to model the turnout for a presidential election this far away from November. There are a lot of tough choices that pollsters must make, and it is not fair to single any pollster out for the decisions it ultimately goes with. Nevertheless, we can and should still be smart consumers of political polling. We need to keep the historical spread between the two sides in mind, and be cautious of polls that show a relatively wide Democratic advantage over the GOP. They are probably underestimating the GOP's electoral strength.
Jay Cost is a staff writer for THE WEEKLY STANDARD and the author of Spoiled Rotten: How the Politics of Patronage Corrupted the Once Noble Democratic Party and Now Threatens the American Republic, available now wherever books are sold

Posted by MrGarabaldi at 5:23 PM