This is why I try to pay "cash" for purchases.  That is the bad thing about "Debit" cards, your financial institution has access to your account and you have to try to prove them wrong.


Feel like gas prices are making a dent in your budget? Imagine how Ray Crockett felt when he received a bill for nearly $85,000 after filling his gas tank.
Nashville's News Channel 5 reports that Crockett charged about $30 in gas from a local station to his Citibank debit card last week during a seemingly routine fill-up.
"I stopped here because they had the cheapest gas at the time," Crockett told the station. But that's not what his bank statement showed. "$84,522.54 to be exact," Crockett said.
Crockett says he made the discovery when he attempted to use the card to buy lunch, and the card was denied. When he checked his balance, his statement claimed he was more than $84,000 overdrawn.
"That can't be right," Crockett said of his initial reaction. "It is crazy."
Regular unleaded fuel at the Mapco station runs $3.05 per gallon. That means Crockett would have had to purchase about 27,712 gallons of gas to justify the outstanding charge. 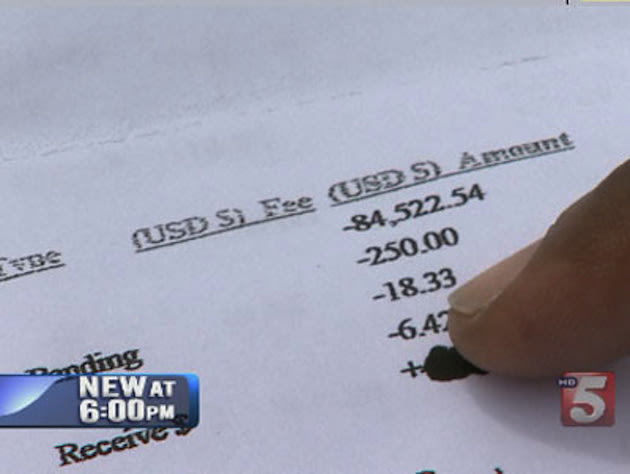 Ray Crockett's almost $85,000 gasoline bill (NewsChannel5.com)
Even crazier is that Crockett was caught between a rock and a hard place when the bank claimed it had made a payment to the gas station for the full amount. But the gas station says it never received a payment from Citibank.
And it appears that Crockett may not be alone. Nikki Johnson, another customer at the same gas station, put $22.47 on her credit card for coffee and gas. Simple enough, right? Johnson checked her bank statement to find she had been charged $58,278.35 for the transaction.
Crockett was left out of financial resources, except for a $100 gift card that the Mapco gas station gave him to help him get by until the issue was resolved.
When News Channel 5 asked Citibank why it had locked Crockett out of his account and refused to cancel the purchase, an employee simply told Channel 5, "Because this is his account."
Crockett wasn't even able to access his weekly paycheck, which was directly deposited into the $84,000-overdrawn account.
However, the story has finally taken a turn in Crockett's favor. After the station's investigation, Citibank has reportedly unlocked Crockett's checking account and issued the following statement:
"Due to a[n] input error at the merchant, a charge was erroneously billed to [the customer's] account," the statement reads. "Citi has credited [the customer's] account and his card is available for use. We apologize for any inconvenience this caused and are putting processes in place to ensure that this does not happen in the future."
Posted by MrGarabaldi at 8:39 PM