I waited several days to formulate an opinion on the tragedy that had transpired in Colorado.  What didn't surprise me at all were the calls for immediate gun control laws by the same group of people.  Brady group, Mayor Bloomburg and the other assorted leftist groups.  I swear that the lefties have no morals and no integrity.  They started dancing on the still warm blood of the victims pushing their pet agenda.  I will give President Obama credit( for the first time) by not immediately pushing the same agenda, he asked for the flags to be at half mast and for us to pray for Aurora Colorado.  That is it.  He is adopting a wait and see attitude.  Politically it would be the kiss of death for him to push the agenda.  Mitt Romney has said the same thing.
I have noticed also that the mainstream press was salivating at the thought of connecting this loon to the Tea Party.  They jumped before checking their facts.  Nothing like having the facts get in the way of their agenda and they wonder why the old school media is discounted and not trusted.  They used to report the news...now they try to spin it to support their agenda. 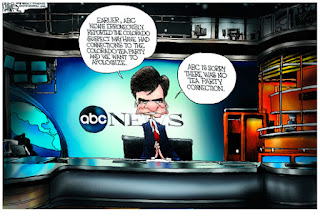 Something that was mentioned by Old NFO and many others is the fact that these are "gun free" zones...a gun free zone is a place where law abiding people cannot carry a weapon or violate the law.  Remember the key word here "Law abiding".  Criminals are by definition already lawbreakers, so see a gun-free zone will not affect them in the least.  "Gun Free" zones are victim disarmament zones where the law abiding are unarmed and the criminal has free rein.  Gun free zones are usually placed by companies that are what is called " risk adverse"   basically they don"t want to be sued by a bunch of bottom feeding lawyers.  So they put of this sign saying no guns so they can say" see, they broke the law...we are not libel.   This is the work of another democrat constituency.....lawyers.
I also think that it is ironic that this happened to take place the week before Hillery is supposed to sign this U.N gun treaty.  I being a suspicious cynical bastard wonders if this is by design.   Also you notice that the liberals in Hollywood, that preach against the 2nd amendment insist on the first amendment being sacrosant so they can put out there more and more demented crap.  I have commented more and once that the rest of the world think that Hollywood is "us" America and i think that it is ironic that the values on Hollywood don't reflect most of America....Remember we are the bitter clingers that cling to our guns and religion because we will not accept the socialist utopia that our betters want to impose on us because they are soo much more educated than we are and they know what is best for us.
I also want to state, what the 2nd amendment is.....it is our protection against a tyrannical government.  As long as we are armed, they cannot enslave us.  Armed citizens or unarmed peasants....they choice is ours. 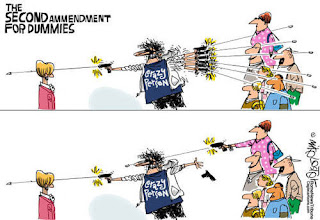