THe DNC in a nutshell....The Vagina monologues

I was reading all the stuff from the 4 days of the DNC in Charlotte N.C.   After trying to figure out the total summation of the activities, It occurred to me what the underlying theme was,   Sandra Fluke set the tone for the convention, it became all about the reproductive rights and free contraceptives.  More free stuff for more people.   There was nothing said about the dismal economy, nothing said about the horrendous debt that Obama and crew have wracked up since the inauguration.  Nothing about the unemployment rate, nothing about the underemployed, nothing about people that have just given up.  There was no plan offered...just the vague promise of more of the same   and of course free contraceptives and reproductive rights.  But of course they removed God and Jerusalem from  their platform, before putting both back in in a messy voice vote.   Bill Clinton gave a great speech, but I think it was more to pump up the chances of Hillery in 2016.  The 2012 Democratic convention is now in the history books as a party that has gone on too long and the bill is fixing to come due and I wonder of Obama and crew will duck out of the building through the kitchen to avoid the coming reckoning from the reckless spending and living large on other peoples money. 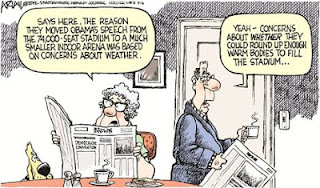 I saw this on Sultan Knish


If a convenient time machine were to deposit a Roman citizen, circa 140 or so, in Charlotte, he would have no trouble understanding what was going on. Our Roman might not understand a word of what was being said, but he would be able to take one look at the garish costumes, the hysterical air of self-congratulation worn by men and women who have accomplished absolutely nothing in life, and the clownish theatrics and realize exactly what was going on. "Oh no, not again," would be the last thing he would think just before being lobotomized by a loose heel from Nancy Pelosi.

If bankrupting the country, destroying its economy and using its legal documents to roll joints wasn't bad enough, the people responsible for all this thought it would be a fine idea to make their national convention about abortion and gay marriage. It was either that or any other random thing that will hit the right buttons on the sort of people who leave their buttons exposed to the air.

The old Democratic convention looked like some music video director's idea of Olympus. The new one looks like the stage for a concert, something popular, noisy and lip-synched. Any minute now some musician who used to be a waiter two weeks ago before going professionally viral will slink out on stage and begin making mouth movements to recorded music while digital fireworks go off in the background.

This is MTV politics designed by those who don't understand that MTV is over and that they're over. Their fifteen minutes are up and so are their four years. Cinderella won't marry the prince and spend another four years bankrupting the country. The trend that swept this mob into office is headed the other way and their desperate attempts to stay cool are as pathetic as they are hopeless.

The Democratic National Convention is swarming with rabidly enthusiastic people who are hyped up about things in the way that only the professionally cheerful are. The message is that everyone is happy to be here, repeated at decibel volumes and with simultaneous sign language translation, which is the surest sign that no one is happy to be here at all.

There's a moment in every party when no one knows anymore why they are at the party or what the point of the party is. The party is just there and they're there and they're doing their best to pretend to be having fun, but worryingly they're not sure what fun is anymore. There's just noise, balloons and lots of bright colors. Someone makes a speech and everyone applauds because it's the thing to do. And everyone stays because that's also the thing to do. That's the Convention in a nutshell.

Garish, loud and out of sync with the country. That's not just Pelosi or Debbie Wasserman-Schultz, it's the entire ridiculous affair full of pols who manage to look sweaty and haggard at the same time trying to remember their lines. While a nation of unemployed and barely employed watch hoping for economic solutions, they are treated to bizarre costumes and even more bizarre speeches by a party that is so deep inside its statistical bubble that it will run an abortion convention if it wins it another one tenth of one percent in a crucial swing state.

But none of this is really for the hoi polloi sighing wearily while thinking of the long day waiting for them tomorrow. This is for the money men and women, for the grass roots activists in 600 dollar shoes who want to be reassured that this party deserves their money and their inappropriate use of public resources for get out the vote operations. And what they want is abortion and gay rights, not because they really believe in either one, but because they like trendy things.

Obama may be a Marxist, but he isn't the kind who owns two suits like Vlad Lenin. He's the kind that people with more money than taste like. And the entire convention is a tribute to that vulgarity of the spirit and the senses, an aesthetic armageddon in which every element, including the people, seems designed for mass seizures and mass suicides.

The common man will get Michelle Obama, Bill Clinton and Barry delivering the best speeches that the best money can buy. But this party isn't really for them, it's the last hurrah of people who expect to lose because they have chosen losers to lead them. This isn't a winner's convention, it's Custer's Last Stand with balloons and lifelike politician puppets. It's the blowout that will rid the Democrats of some of their dead weight, like Debbie Wasserman-Schultz, while keeping them competitive enough with target groups that they can blame their defeat on discrimination, rather than a popular revolt against their failed economic policies.

What the Democratic National Convention, 2012 edition, is really meant to accomplish is create a narrative where Obama lost, not because of the economy, but because he committed to liberal values, because he went all out on gay marriage, abortion and illegal immigration, and liberals failed to back him up. The story will not be that the election was a referendum on economics, but a way for the white majority to disenfranchise the voices of feminists, gays and minorities. It is the story that they will carry into their battle to retake Congress in 2014 and their attack on the White House in 2016.

Obama is too stupid to understand that the convention isn't there for him, it's there for the one woman who didn't show up. Hillary Clinton. It's why Bill Clinton will get up there and cheerfully tell everyone to win one for the zipper, because he has already won. And the guy who should have been carrying his bags and getting him his coffee has lost. This is Hillary's convention. Her empty chair is the one that sets the stage for her comeback. And in 2016, when Obama walks out on the stage on the second day to tell everyone that Hillary will continue his work, he finally will be carrying their bags.


In his dressing room, Obama is still dancing around to "Eye of the Tiger" on his Zune, psyching himself up for the clash of egos. But Romney isn't playing that game, neither is anyone else. Obama's idea of achievement is that of a man who has never achieved anything. The answer is always to push harder, so long as someone else is doing the pushing. Walking egos don't believe in the forces of history and don't understand that before people vote, they don't check commercials, they check their wallets. Walking egos don't understand that people, even people who work for the government, who are proud to wear the scarlet D, see politicians as employees selected to do a job. And that in the privacy of the booth, they will vote for change.

No campaign is inevitable, but people are not tools in the hands of politicians, politicians are tools in the hands of people. That is a dangerous truth that the big men and women are partying to escape in Charlotte. This is their masque of the red death where the radicals party like it's 2009 and the shift against their policies hadn't happened yet. And some of them understand that they have reached the end of their political journey. After this the culling will begin and just as after Kerry's loss, it will not be pretty.

The Obamas were never anything but tools in the hands of men and women who were also tools in someone else's hands. This isn't a matter of conspiracy theories, it's a matter of politics. Obama was a tool that some people and organizations used to get things that they wanted done. They burned through him and burned him in the last year because they knew that his usefulness was nearing its end. They aren't done, but they are moving on and it's only the chumps still putting money in the Hopier and Changier tin. It's the chumps partying on television and having an enforced good time.

The Party is over but the party is just beginning.
Posted by MrGarabaldi at 8:33 PM