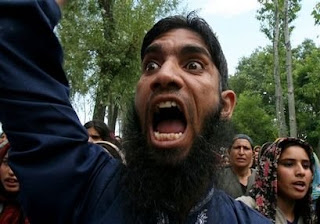 "The Angry Muslim"...what a cliche.   It goes together like Peanut butter and Jelly, wait...can't use that it might be construed as racist.   Ok lets try Pork and beans....what can't use that either, it is an insult to Islam.  Well we can try Gin and tonic....wait..can't use that either they hate booze...it offends them.   Well it seems that everything offends them.   That is what happens when you have a 7th century religion in the 21st century with internet access.

When most people are offended, they launch boycotts or hold signs....well when Islam is offended..people die.    Religion is supposed to teach people how to get along better with each other and provide a moral compass to live a good life.  Religion is supposed to teach the "Golden Rule" on how to deal with your fellow man.  But with Islam there is no "golden rule"   If you don't agree with Islam, you have offended the Prophet Mohommed and you will get a fatwa and somebody will try to kill you for insulting Islam.  Other religions have had their aggressive colonial period, but now Islam is going through this and they are exposed to the internet and you tube.  When other religious people do something stupid like the Westboro Baptist Church with their signs, they are rightly pilloried as kooks.
Islam is treated to a double standard, other religions are treated as grownups whereas Islam is treated like a child..It throws a  temper tantrum and the adults just pat Islam on the head and say condescendingly "there, there".  islam isn't treated to the same standard.  If Christians acted in this way, there would be worldwide condemnation of the act.   People are afraid to do or say anything for fear of offending...this is P.C. run amuck.  When the Muslims rioted the past week, people immediately blamed some low budget movie and this was the excuse for the bad behavior.  Now they want us to suspend our first amendment rights to appease the "Angry Muslim".  When will it stop?  Right now we are viewed as a paper tiger and weak.  This will encourage more bad behavior.
Now we have this newsweek cover and it has the leftist in a tizzy....they are afraid of offending Islam some more.   When will it end? 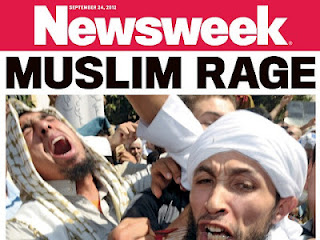 Posted by MrGarabaldi at 2:54 PM