I am a student of history and I find this extremely disturbing.   I am having visions of the past


EXCERPT:  "The Obama campaign has launched its “For All” campaign, encouraging supporters to take pictures of themselves with their hands on their hearts and a note explaining why they support President Obama."
Evidently this idiot forgets what happens when people pledge allegiance to a man. 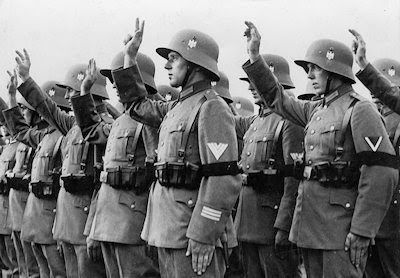 Historical note: 19 August, Hitler gets 90 percent of the vote.
20 August a mandatory oath of fealty to the Führer was introduced:

"I swear: I shall be loyal and obedient to Adolf Hitler, the Führer of the German Reich and people, respect the laws, and fulfill my official duties conscientiously, so help me God."


We all know how THAT turned out.

You can read more here.

The Obama campaign has launched its “For All” campaign, encouraging supporters to take pictures of themselves with their hands on their hearts and a note explaining why they support President Obama.
Actress Jessica Alba uses the Pledge of Allegiance as an example of the campaign in an email to supporters.
“Growing up, my classmates and I started every day with a ritual: We’d stand up, put our right hand over our hearts, and say the Pledge of Allegiance,” explains Alba. “To me, that gesture was a promise. A promise to be involved and engaged in this country’s future. A promise to work for liberty and justice — and for affordable education, health care, and equality — for all.”
Alba joins Hollywood actresses Natalie Portman and Scarlett Johansson by photographing herself with her hand on her heart pledging to vote for Obama.
“That’s why all across the country, people like you and I are proudly writing down our reasons for getting involved, and then taking the pledge — to vote.”
Obama campaign staffers have also begun posting photos of themselves with the pledge.
“Make sure you’re ready to vote this fall,” Alba writes. “Putting your hand over your heart is making a promise. Casting your ballot is keeping it.” 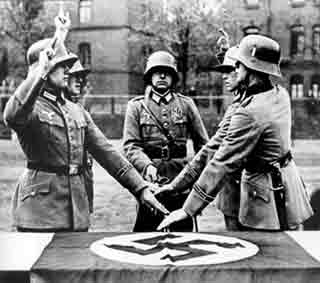 In taking the Fuehrer Oath, the German Army swears allegiance not to the Republic, not to the flag, not to the constitution, and not even to the office of the head of state, but to Adolf Hitler personally who has now attained absolute power over the German people.
The table below displays the oath of allegiance prior to Hindenburg's death and how it read after its key words were altered on August 2, 1934.