Driver gets nailed with mobile Office

When I was doing my commercial driving a few years ago, I saw many things behind the wheel by the other drivers and it scared the crap out of me.   Things from talking on cellphones and applying makeup to clipping toenails while driving.  The worst I ever saw was a women driving a kia minivan with a low air front tire and she was reading a book on the steering wheel of her van and weaving back and forth. 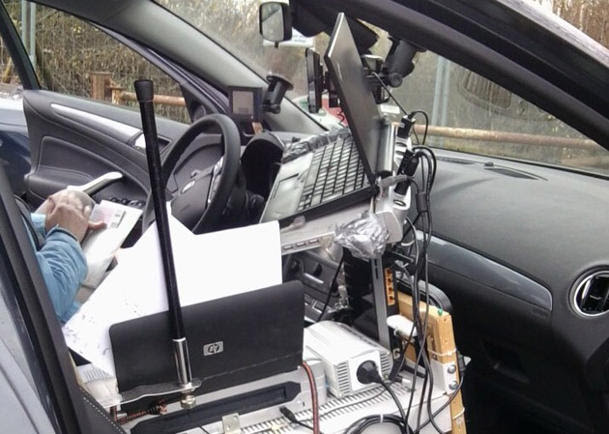 Distracted drivers existed well before the advent of cellphones, and will likely exist long after such devices are shrunk to the size of a thumbnail and implanted under our skins at birth. In the meantime, many drivers will try to split their attention to the road with their work -- and one of the worst such offenders was caught hauling not just a phone or laptop, but an entire mobile office.
Police in the Saarland region of Germany pulled over a Ford Mondeo wagon last week for going about 80 mph in a 62-mph zone. Inside they found a Staples shopping spree in the front seat: a laptop with docking station, a router and wi-fi antenna tied to a cellular data stick, a printer and a power inverter to keep it all humming. The driver had taken some precautions toward distracted driving by mounting his cellphone to the windshield for hands-free use.
The setup looks messy and dangerous -- but as American police are finding, writing a ticket for distracted driving requires a tough level of proof. The German authorities didn't cite the Mondeo driver for any violations, because they didn't see him playing Michael Scott behind the wheel. I hope he's not one of those readers who needs to print out his emails to read them.
Posted by MrGarabaldi at 10:57 AM