I used to mess with Elint when I was in the service.  Targeting the Soviet Air Defence System was my stock in trade.   Even now if I saw a picture of a SA-2 Guideline, I knew immediately that the associated missile system was the "Fansong"   I could ID the photo's of that and other systems.    What can I say, the training I had received was very good.
I ran across these photo's of a modern Russian SAM system while surfing and decided to cut and paste.   I did wonder if these systems around Moscow replaced the SA-1 Guild in the same locations....

The  Bold in the photo's are my additions. 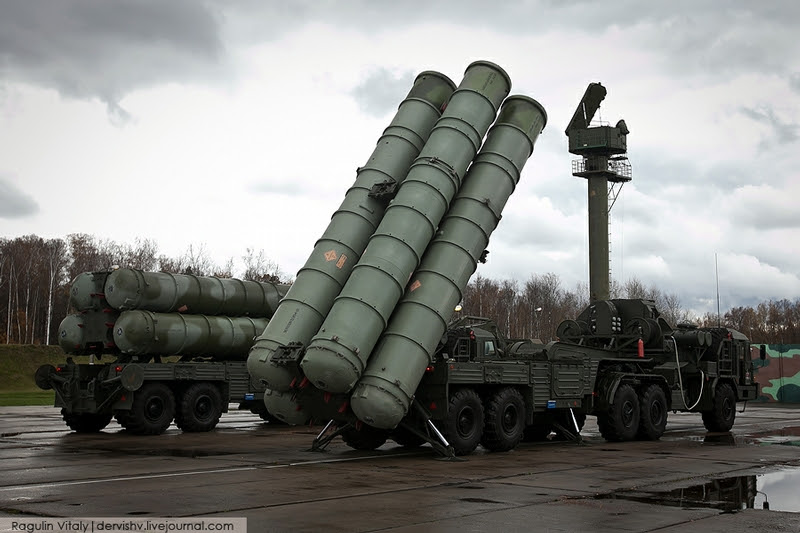 We are going to visit one of the units of Air Defence in the Moscow region which has a famous Russian anti-aircraft weapon system S-400 “Triumph” of a new generation.
The S-400 uses 3 different missiles to cover its entire performance envelope. These are the extremely long range 40N6, long range 48N6 and medium range 9M96 missile. Each one has different capabilities.

The system is intended to destruct all modern and future means of aero-space attack. The system was put into service in April, 2007. The tests confirmed that the Russian air defence complex is the best in the world according to its specifications. But the power is not in the army or equipment but in the people who make it work. This is a charging machine. These are transport and launch containers with the missiles. Technical maintenance of the system is held twice a year: in spring and in autumn.  The Russian Army still used the old Soviet style of Conscription and that happens twice a year The soldiers are listening to the order.  I cannot tell if that is an Officer or an NCO.  The Russian army doesn't have much of an NCO corp, the backbone of any professional Army.  Their officers do a lot of the work that in the west and NCO would do. If he drop it everything will explode! Just kidding… The missiles are to be carefully put on the pallets. More instructions are given. Maintenance is in full swing. Be careful with the plasma reflector, soldier! All system components are based on a wheeled chassis terrain. They are ready for launch. The banner says: “The basis of the country’s air defense is anti-aircraft missile troops – the forces of permanent readiness”.Notice the old style Soviet banner with the "CCCP" markings.
The system is able to destruct object flying with speed up to 4 800 m/s at a distance of up to 400 km (248 miles), at the height of objects – to 30 km. At that the minimum range of the complex is only 2 km (1,24 miles) and the minimum height of the targeted objectives is only 5 m (16,5 ft). American complexes “Patriot”, for example, cannot destruct object flying lower than 60 m (197 ft)  I have no expertise in the Patriot missile system so I cannot confirm or debunk the claim.  But the Soviets traditionally had a overlapping air defense system from the ground always to high altitude to defend the Motherland
It comes into the state of full combat readiness for 5-10 minutes.
Posted by MrGarabaldi at 12:44 AM