This is a liberal wet dream, they haven't learned from the past.   I am a student of history and Hitler disarmed the German Populace in 1935 and at the same time stripped the German Jews of their rights with the Nuremberg Accords.    People forget the lessons of the past and repeat the same mistakes.   The Chicago Messiah and his ilk would love to do the same thing here.  Now we have the U.N. small arms treaty to contend with.  I have already decided to disobey any gun ban and registration demands from Moscow on the Potomac.  I do not see most of the police officers or the Military willing to go door to door and seize firearms.  When I see all these liberal pundits pontificate about "seizing guns" or something along that line, I ask  " you willing to lead the stack and knock down doors to do it.?"   They refuse and say " well that isn't their job."  I being snarky would reply " so you would demand this law but refuse to assist in carrying it out?  Have the regular cops do this and pay in blood for trying to seize privately owned firearms to support these diktats for some socialist wet dream that has never worked anywhere else?"  All gun control does is screw the law abiding citizens, not the criminals. 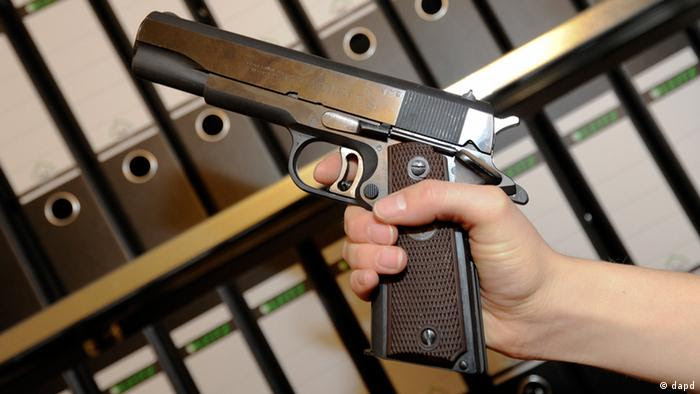 The German interior minister has said a countrywide database of all legal gun owners is set for launch on January 1. Hans-Peter Friedrich predicted a "considerable increase in security" as a result.
The German government plans to launch its complete registry of legal gun owners at the beginning of next year, two years ahead of a deadline set by the EU.
As with many German authorities, those responsible for weapons licensing and tracking operated on a local basis - with a total of 551 authorities around the country. Under new EU laws, all member countries are obliged to compile a centralized register.
There are an estimated 6 million licensed firearms in Germany.
Interior Minister Hans-Peter Friedrich told reporters in Berlin that the database would provide "a very concrete contribution towards improving public safety." Thanks to the information, he said; police would be able to check "who owns which weapons legally, across the entire country," perhaps more quickly than in the past.


Friedrich also praised the relevant German agencies for setting up the system ahead of schedule.
"With this Germany is one of the first member states to fully comply with the demands of the EU guidelines," the interior minister said.
Instant info in critical cases
Jörg Ziercke, the head of Germany's federal criminal investigative agency, the BKA, said at Monday's presentation that particular gains would be made in investigations where time was of the essence. He told reporters that in the worst case scenario, it used to take three or four months to discover where a weapon came from, whereas soon it should be just a click away.
The January 1 version of the database is only the first, watered-down database documenting only the legal registration of firearms. The upgraded registry should eventually document historical information like weapon producers, dealers, importers and any previous private owners.
The GdP trade union representing many of the country's police officers welcomed the development, while saying that it was a little overdue.
"With this, an old demand from the GdP has been fulfilled. It took a long time, but the technical implementation was quite a challenge," the union's national chairman, Bernhard Witthaut, said. A sister police officers' union issued a similar statement, saying its officers had long lobbied for swifter access to information on firearms.
Posted by MrGarabaldi at 4:26 PM