Remember my story last week about the Arizona Gun Store owner who banned Obama Voters, the story is here if y'all need to refresh your memory.    Well there is more to the story: 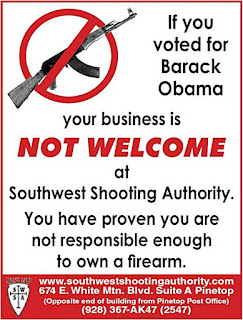 Last week, the owner of an Arizona gun shop made national headlines after it was reported that he had posted a sign and taken out a full page ad in a local newspaper that banned Obama supporters from entering his store.  One week later, Cope Reynolds is cashing in on the attention.
Mr. Reynolds, owner of Southwest Shooting Authority says “business is booming” after his sign and newspaper ad caught the attention of various media outlets.  The sign read: “If you voted for Barack Obama, your business is not welcome at Southwest Shooting Authority. You have proven you’re not responsible enough to own a firearm.”
Reynolds says he has been inundated with hundreds of calls and emails from media types and supporters.  When asked about business, he replied, “I’ve been busier than a cat covering up poop on a marble floor.”
The Arizona Republic spoke with Mr. Reynolds about his sign and the effect it’s had on his business:
“People are saying that I’ve alienated half of our customers,” Reynolds said, laughing. “No, I haven’t. I haven't alienated any of my customers, because the people who voted for Obama don’t buy guns here. They don't come here at all. I haven’t alienated. I’ve improved things. I have packages sitting on my desk to be shipped to places like Massachusetts, Connecticut, New York, Idaho, Nevada and California.”
Talking Points Memo asked Mr. Reynolds how he will prevent Obama supporters from entering the store and purchasing merchandise.  He said he will not be conducting a litmus test to determine the customer’s political views but that he is considering giving discounts to registered Republicans and Libertarians.
Seventy-Five percent of the calls he is getting are positive, Reynolds says.  “You can always tell the ones that are not -- 9 out of 10 of them start out with vile and nasty language. And I guess they don’t have the intelligence to carry on a conversation like an adult.”  Reynolds also revealed that he has been receiving death threats saying, “Just comes with the territory I guess.”
Mr. Reynolds admits that there haven’t been any serious attempts by the Obama administration to change America’s gun laws, but he suspects that is coming now that the president has been reelected.
Posted by MrGarabaldi at 5:37 PM