I am going to take a break...for a minute of all the Obungler scandals that are perking up like crabgrass and talk about something that I am fascinated with...Aviation...and in this case...Naval Aviation.  This article is for all the Naval aviation types like Old NFO and many others like the First President Bush who flew off carriers in WWII and got shot down in combat.   I remembered that he was castigated in the press for being a wimp or pansy.  Senior did a lot of things I wasn't crazy about but I never questioned his bravery or integrity.  He has seen the elephant and his mannerism reflected that.   I am an Army Veteran but I always have had a fascination with ships and airplanes.   I have visited 1 aircraft carrier...the U.S.S.  Yorktown for my sons scout trips. 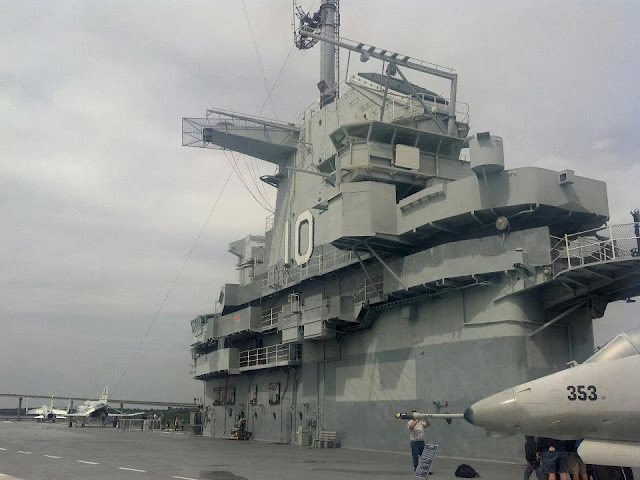 I have flight benefits and I have taken my son to several museums, including The Smithsonian Museum in Washington D.C.   That was a great trip 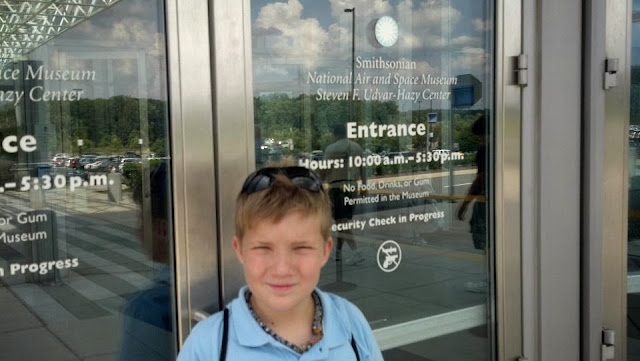 I also took him to a favorite museum, that is the Naval Aviation Museum down in Pensacola and that one was a blast, from seeing where the Blue Angels hang at,  to seeing all the warplanes in their glory.  There also is a restaurant that is a duplicate of the Cubi point Bar Cafe with the plaques that showed all the deployments from all the aviation units from Vietnam to Desert Storm. 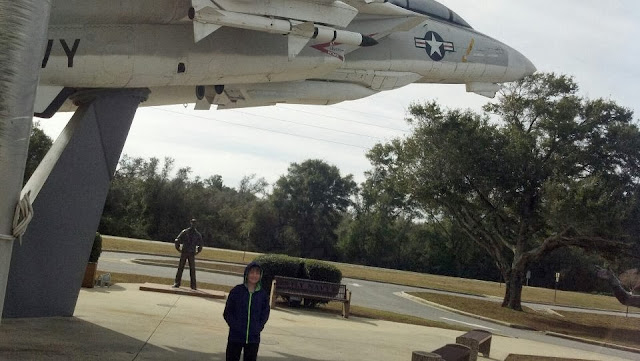 That trip is very worth the effort and the car rental was $27 dollars for the day for a Ford Focus.     We also stopped at Fort Barracas, which was one of the forts protecting Pensacola. from seaborn attack.   Advances in artillery and rocketry and aviation made the fort obsolete.

100 Years Ago, January, in San Francisco , when Eugene Ely invented naval aviation.
One hundred years is a very long time. Yet in the hierarchy of modern marvels, the ability to recover and launch aircraft from the deck of a moving ship stands out as one of our signature accomplishments. Which just goes to show you: Some tricks never grow old. 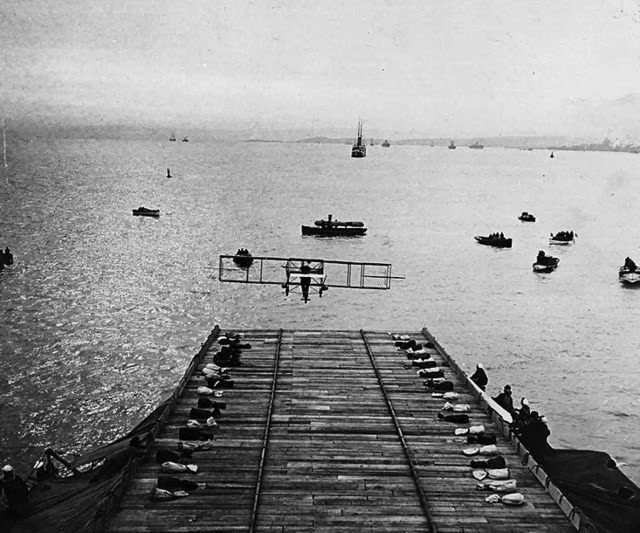 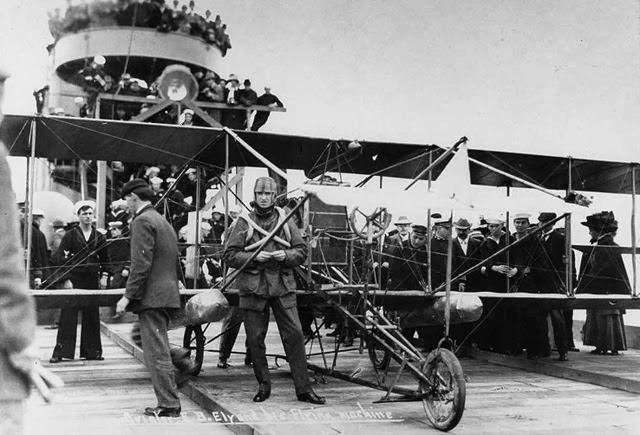 Naval aviation was invented one hundred years ago, on January 18, 1911, when a 24 year-old barnstormer pilot named Eugene B. Ely completed the world's first successful landing on a ship. It happened in San Francisco Bay , aboard the cruiser USS Pennsylvania, which had a temporary 133-foot wooden landing strip built above her afterdeck and gun turret as part of the experiment. 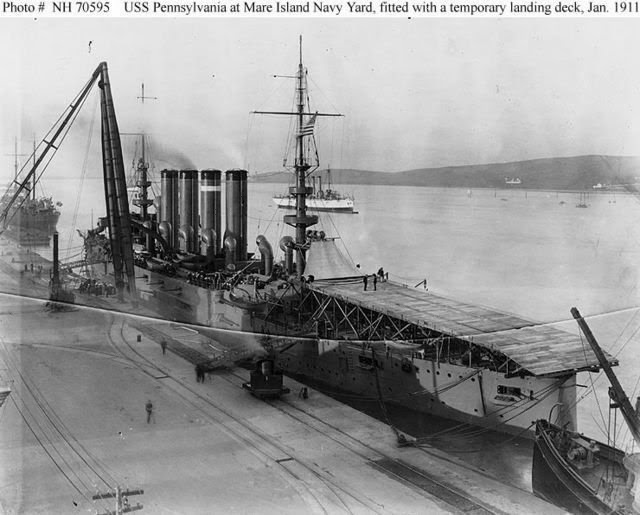 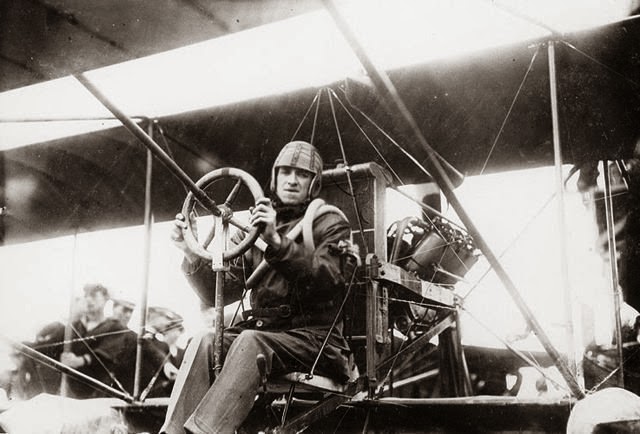 Ely accomplished his feat just eight years after the Wright Brothers made their first flight at Kitty Hawk . His aircraft was rudimentary: a Curtiss Model D "Pusher" biplane, equipped with a 60 hp V-8 engine that gave the aircraft a 50 mph airspeed. To get a sense of how simple it was, behold a contemporary replica of Ely's 1911 Curtiss Pusher that was built to celebrate this 100th anniversary: 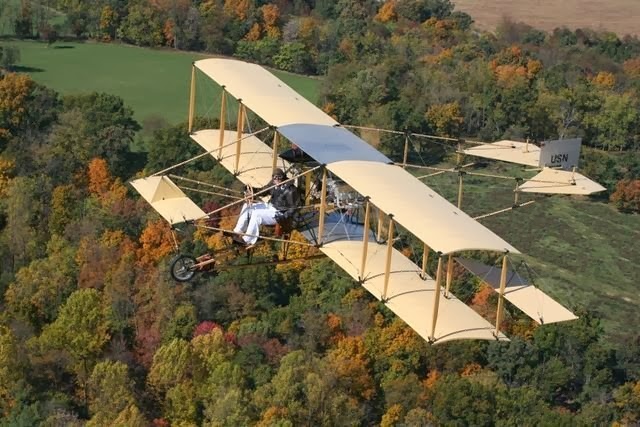 But back then, innovation was afoot. Ely's Curtis Pusher had been fitted with a clever new invention called a tailhook. The idea was to quickly halt the aircraft after landing by using the tailhook to catch one or two of 22 rope lines -- each propped up a foot above the deck and weighted by 50-pound sandbags tied to each end -- strung three feet apart along the Pennsylvania 'S temporary flight deck.
Mark J. Denger of the California Center for Military History has written a tidy biography of Eugene Ely which narrates the historic day: On the morning of January 18, 1911, Eugene Ely, in a Curtiss pusher biplane specially equipped with arresting hooks on its axle, took off from Selfridge Field (Tanforan Racetrack, in San Bruno, Calif.) and headed for the San Francisco Bay. After about 10 minutes flying North toward Goat Island (now Yerba Buena), Eugene spotted his target through the gray haze – the PENNSYLVANIA .
Ely's plane was first sighted one-half mile from the PENNSYLVANIA's bridge at an altitude of 1,500 feet, cruising at a speed of approximately 60 mph. Now ten miles out from Tanforan, he circled the several vessels of the Pacific Fleet at anchor in San Francisco Bay . The aeroplane dipped to 400 feet as it passed directly over the MARYLAND and, still dropping, flew over the WEST VIRGINIA 'S bow at an height of only 100 feet. With a crosswind of almost 15 knots, he flew past the cruiser and then banked some 500 yards from the PENNSYLVANIA 'S starboard quarter to set up his landing approach. Ely now headed straight for the ship, cutting his engine when he was only 75 feet from the fantail, and allowed the wind to glide the aircraft onto the landing deck. At a speed of 40 mph Ely landed on the centerline of the PENNSYLVANIA 'S deck at 11:01 a.m. 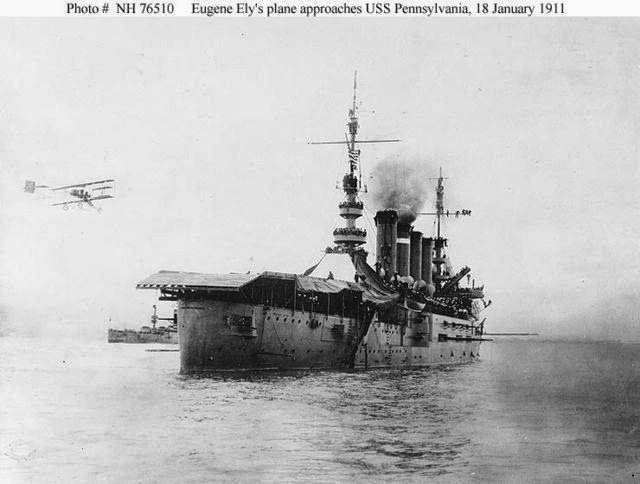 The forward momentum of his plane was quickly retarded by the ropes stretched between the large movable bags of sand that had been placed along the entire length of the runway. As the plane landed, the hooks on the undercarriage caught the ropes exactly as planned, which brought the plane to a complete stop.
Once on board the PENNSYLVANIA, sheer pandemonium brook loose as Ely was greeted with a bombardment of cheers, boat horns and whistles, both aboard the PENNSYLVANIA and from the surrounding vessels. 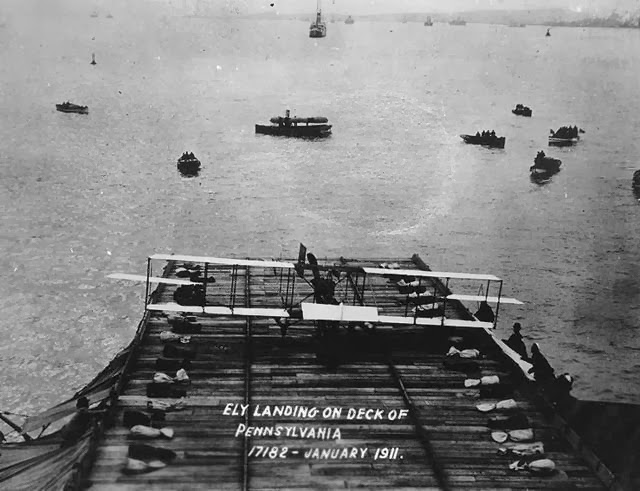 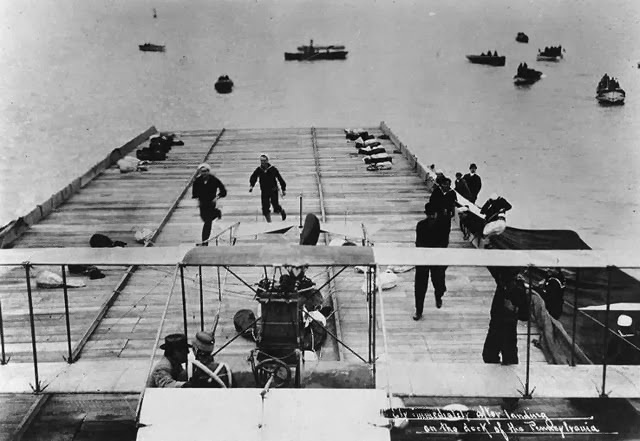 Ely was immediately greeted by his wife, Mabel, who greeted him with an enthusiastic "I knew you could do it," and then by Captain Pond, Commanding Officer of the PENNSYLVANIA . Then it was time for interviews and a few photographs for the reporters.
Everything had gone exactly as planned. Pond called it "the most important landing of a bird since the dove flew back to Noah's ark." Pond would later report, "Nothing damaged, and not a bolt or brace startled, and Ely the coolest man on board." (NOTE: Safety first! Check out Ely's inner-tube life preserver!) 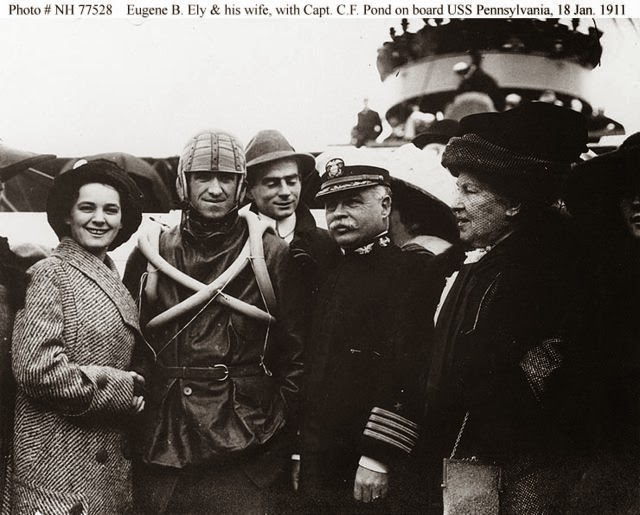 After completing several interviews, Ely was escorted to the Captain's cabin where he and his wife were the honored guests at an officers lunch. While they dined, the landing platform was cleared and the plane turned around in preparation for takeoff. Then the Elys, Pond and the others posed for photographs. 57 minutes later, he made a perfect take-off from the platform, returning to Selfridge Field at the Tanforan racetrack where another tremendous ovation awaited him. 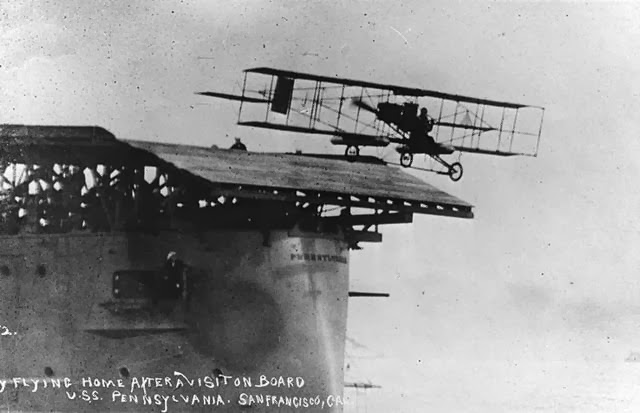 Both the landing and take off were witnessed by several distinguished members of both U.S. Army and Navy, as well as state military officials. Ely had successfully demonstrated the possibility of the aircraft carrier. 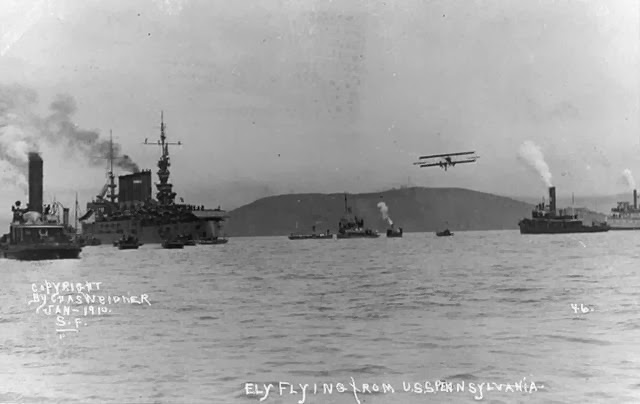 Indeed. The US Navy's first aircraft carrier, the USS Langley, was commissioned in 1922, eleven years later. But Ely didn't live to witness the milestone; he died just a few months after his historic flight, on October 11, 1911, when he was thrown from his aircraft during a crash at an air show. But 100 years ago, he merged the power of naval warships and aviation in ways that remain cutting-edge, even today. 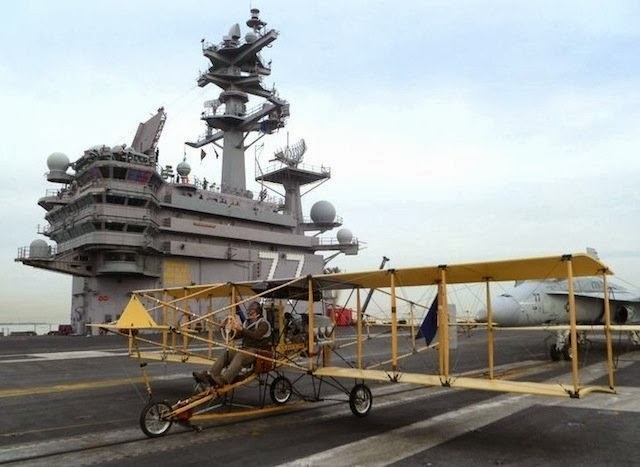 On October 19, 1911, while flying at an exhibition in Macon, Georgia, his plane was late pulling out of a dive and crashed. Ely jumped clear of the wrecked aircraft, but his neck was broken, and he died a few minutes later Spectators picked the wreckage clean looking for souvenirs, including Ely's gloves, tie and cap. On what would have been his twenty-fifth birthday, his body was returned to his birthplace for burial.
On February 16, 1933, Congress awarded the Distinguished Flying Cross posthumously to Ely, "for extraordinary achievement as a pioneer civilian aviator and for his significant contribution to the development of aviation in the United States Navy." An exhibit of retired naval aircraft at Naval Air Station Norfolk in Virginia bears Ely's name, and a granite historical marker in Newport News, Virginia, overlooks the waters where Ely made his historic flight in 1910 and recalls his contribution to military aviation, naval in particular.
Posted by MrGarabaldi at 4:33 PM