This is my second attempt to post this rant....after the &^^%$%^&& computer downstairs digested it into 1 and zero's and spit out nothing usable....kinda like the Obama Whitehouse.

The New York Post has a startling report, which could point to yet another scandal brewing for this administration.
Take yourself back to the months right before the 2012 presidential election. In September 2012, the unemployment rate magically dropped from 8.1% to 7.8%. It certainly raised a lot of eye brows, especially since the report included an increase in new jobs we hadn't seen in quite some time.
As it turns out, those numbers may have been fabricated. A reliable source says that the numbers were knowingly manipulated by an employee who faked results of the household survey, which is used by the Census Bureau to tabulate the unemployment rate.
The employee caught faking the results claims that he was told to make up the information by higher-ups at the Census Bureau.
If this report is true, it calls into question the integrity of an entire system that relies on these numbers for our economic outlook and business decisions that effect us all. It would also highlight the desperate measures some will take just to get their guy elected. 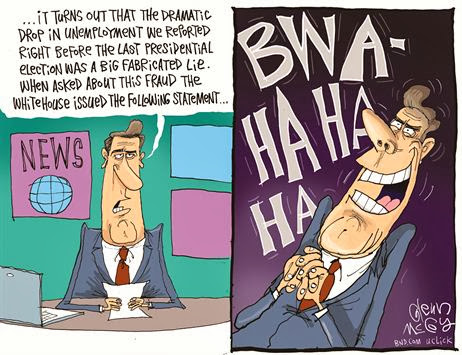 I remember back in 2009 when Rahn"Never let a crisis go to waste" Emanual stated that they would be watching and monitoring the census very closely.  I was concerned because I could see Obama and crew "padding" the census in certain areas to increase the democratic congresscritter count in the house.  I had forgotten that the Census also is part of the unemployment numbers that come from the bureau of labor statistics that is a key economic indicator for the economy.  Funny how there was a jump right before the elections.
I also saw where Harry Reid pushed through the "Nuclear Option" to stop the minority party from interfering with his and the presidents agenda.  This is why the founders did not want "democracy"   we are a constitutional republic....In a democracy it is pure majority rule or rule of the mob.  Using an analogy, it is 3 wolves and 1 sheep voting on dinner.  What is the backdrop is that the D.C. court of appeals has jurisdiction over the rules that are pushed through by the Obama Administration and this is the court that is used to challenge them.  Right now the makeup of the court is 4 liberals and 4 conservatives.  Obama wants to stack the court to permanently change the ideology of the court to rubberstamp his policies.  FDR tried the same thing in 1937 when his "2nd New Deal" was being challenged in court.  Obama knows that he will need a willing congress and a willing court system to continue his plans to "fundamentally change America" 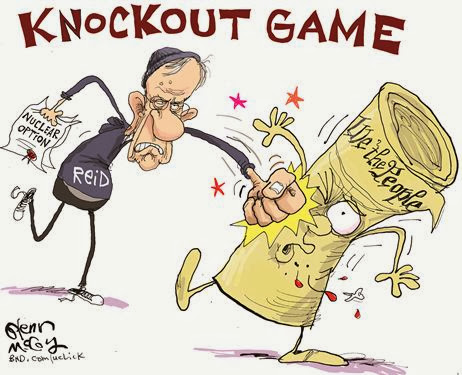 Today is the 50th anniversary of the JFK assassination and the rumors still abound from it was a CIA hit, to a mob hit, to a hit organized by the KGB.  The 2nd shooter and the "Grassy Knoll" theories abound.   This is what is believed by many people, is that John F Kennedy was killed by this person Lee Harvey Oswald a  self professed Marxist.  What has happened since that the left has somehow managed to link Oswald to the conservative movement.  Saying that the people in the south hated John Kennedy and that Oswald was the first one to get a shot off at the President.   How they were able to link Marxism to the conservative movement is quite a stretch.  With the indoctrination in the schools over several generations it is being done. 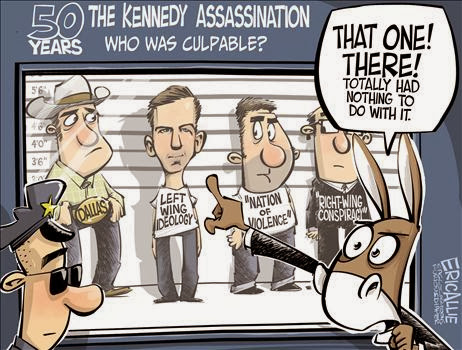 I also have heard where the President is trying to push the individual mandate off until after the election....More political chicanery.  Obama needs the house and senate to be totally democrat along with the courts to push through and rubber-stamp the rest of his agenda that he wants to implement before his term of office expires.  Remember the Presidency was always about him and his legacy that he wants to leave.  I have seen where the various talking heads have started calling it " the affordable care act" rather than "Obamacare"  They are trying to distance the Chicago Messiah from his signature legislation because it is soo damaging to the image that they have built up over the past 5 years.  More people are getting their cancellation letters or letters from the insurance companies telling them that they have insurance but under a different plan that is "ACA compliant".  Which has raised their cost significantly.  Not the $2500 saving that was promised by the President during the election season.   The premise of Obamacare is that it needs a lot of young healthy workers feeding in cash to support the system to provide the coverage that the older not so healthy people and the formerly uninsured have to have.  This is basically in a nutshell a vast income redistribution system and the pisser is that the young overwhelmingly supported Obama and they got screwed.....unless they can hide on their parents insurance until age 26. 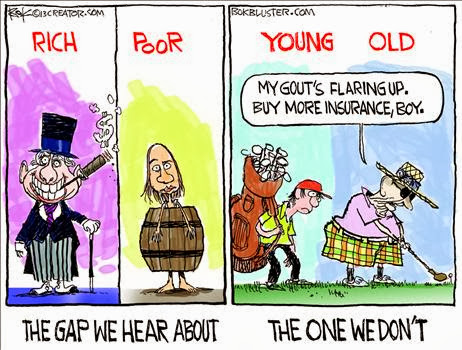 The problem is that once they leave their parents basement and their insurance policies, the future looks bleak for the younger people.  Their job prospects are not near as good as the older generation, and they have a lot of debt and unfunded liabilities that they will have to deal with.  I am afraid for the country that my son will inherit.  Several generations of politicians have spent money the country didn't have to fund their reelection campaigns  by promising the "Gimme Generation "because it is all about them keeping the power that they have accumulated over 20 years of  "public service"   Makes you wonder how Pelosi and Reid and many others happen to be millionaires despite only having a $175,000 yearly salary.     Now the young will pay the price for their lack of vision because they were too wrapped in "Hope and Change".  to see past the snake oil salesman that was peddling the latest and greatest in socialism. 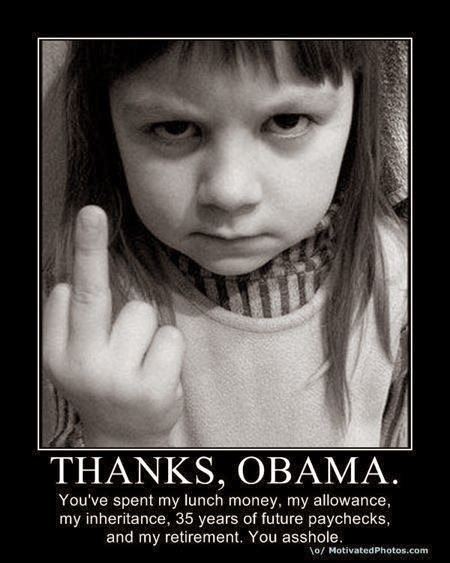 This rant has been building up for several days and I finally got it on the computer.....Hopefully. I can post it.
Posted by MrGarabaldi at 10:25 PM

Email ThisBlogThis!Share to TwitterShare to FacebookShare to Pinterest
Labels: . rants, BOHICA, Obamamessiah, We are screwed