On today's "Monday Music" I decided to go with "Gonna Fly Now", it was the theme from Rocky.  The song is used a lot especially when people train, I used the cassette version back in the 80's when I would go running my 10 KM every day( back when I was  kinda skinny and had good knee's. )  I miss running, I enjoyed it, but I am a stocky guy and not really built like a runner, but I would regularly amaze people with my speed and endurance when I would run.  I remember my first "marathon" run, I ran 5KM at Fort Devens, the first time I ran any kind of distance and it was originally mocked by the training NCO( he was a douchenozzle, his replacement we got later was far superior in leadership and other positive qualities) until others that were there vouched for my running it.  I quit running when I got out of the service, finding a place to run where I lived in an urban setting was difficult, I had to run at night due to my schedule and that made it even more difficult.  Then I stepped in a pothole and wrenched my knee and ankle...and by the time it healed, it took a long time because of my bullheadedness and not allowing my body to heal properly, I had a lot of scar tissue in those areas and that affected mobility. 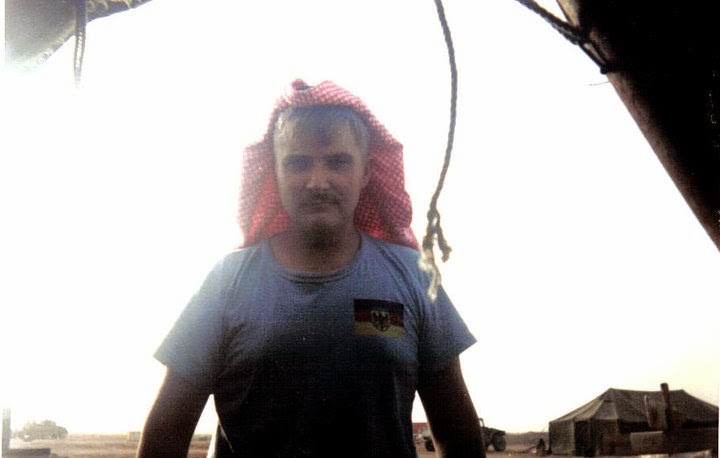 "Young Me"   I was in the Gulf after the war ended, I had finished running and a friend wanted to take a picture of me, so I quickly grabbed the headress we had bought from a street vendor and put it on as a "gag photo"
They talk about a "Runners High" from the endorphin rush from the wind and air rushing past your nose...well it is true, also the "second wind" is also accurate.  I would hit my second wind early, then it was almost " cruise control" after that...I would run and run....I did 2 miles in 13.55, not bad for a guy that had to be " taped" on a regular basis due to my exceeding the weight requirements in AR. 600-9.  The max weight for my age and height was 169.  Well I weighted 180 so I had a lot of waivers for the requirements.
"Gonna Fly Now", also known as "Theme from Rocky," is the theme song from the movie Rocky, composed by Bill Conti with lyrics by Carol Connors and Ayn Robbins, and performed by DeEtta Little (the sister of actor Cleavon Little) and Nelson Pigford. Released in February 1977 with the movie Rocky, the song became part of American popular culture after main character Rocky Balboa as part of his daily training regimen runs up the 72 stone steps leading to the entrance of the Philadelphia Museum of Art in Philadelphia, while the song plays. Rocky, training for a fight he doubts he can win, struggles to run up the steps ("Trying hard now, it's so hard now"). As Rocky gains strength and inspiration ("Getting strong now, won't be long now"), he begins running up the steps with increasing ease and speed. The song finishes ("Gonna fly now, flying high now, gonna fly, fly, fly...") as Rocky runs up the "Rocky Steps" before the Philadelphia Museum of Art easily and with vigor and raises his arms in a victory pose. The song was written in Philadelphia. The song is also often played at sporting events, especially at sporting events in the city of Philadelphia or featuring sports teams from there. 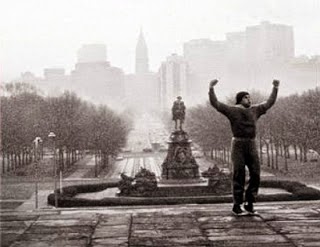 The song (whose lyrics have a total count of 14 words some sung multiple times) was nominated for an Academy Award for Best Original Song in the 49th Academy Awards. The version of the song from the movie, performed by Conti with an orchestra, hit number one on the Billboard Hot 100 chart in 1977, while a version by jazz trumpeter Maynard Ferguson hit the top 30. Disco versions by Rhythm Heritage and Current were on the chart at the same time (Conti's own version reveals some early disco influence in the orchestration). Conti's single was certified Gold by the RIAA, for shipments exceeding one million in the United States. The American Film Institute placed it 58th on its AFI's 100 Years... 100 Songs list. 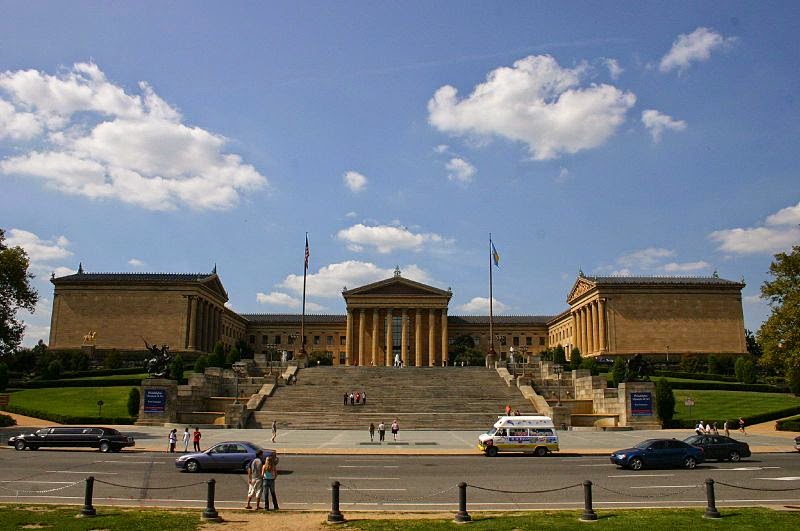 "Rocky Steps" at the Philadelphia Museum of Art
In Rocky II, an alternate version of the song was used, with a children's choir singing the chorus. Rocky III included an updated disco influenced arrangement during the training montage on the beach. This recording is however missing from the soundtrack album, the sleeve notes of which say "All music on this album selected by Sylvester Stallone", who instead opted to reprise the original versions of "Gonna Fly Now" and "Reflections" from the first film and "Conquest" from the second installment.
Rocky IV was scored by Vince DiCola who mainly introduced new themes of his own but "Gonna Fly Now" returned with its composer for later installments. In Rocky Balboa, a slightly different version of the song used more trumpets and different vocal tones. The soundtrack for that film also includes a vocal remix performed by Natalie Wilde.


Due to its original use, the song (or soundalikes) is used frequently in various forms of popular media where a main character is forced to train hard in order to defeat an opponent, often during a montage sequence.
American politician and former Vice President Walter Mondale used this as his campaign song in 1984.
It is often played at sporting events in the city of Philadelphia. For example, it is played right before kickoff of Eagles games at Lincoln Financial Field.
In the Philippines, the song was used in the commercial for Tiger Energy Biscuits which shows the Tiger mascot eating the said biscuit brand before jogging in the streets of Manila.
The 2013 back to school advertising campaign for Target featured the song as a little girl attempts a chin-up during gym class.
The song was used in an episode of the television series My Name Is Earl.
The song was also played in one of Despicable Me 2's mini-movies, "Training Wheels" when Agnes was training for her new rocket-bike.
The song was used in Jackass 3D as part of a recurring gag called "The Rocky," which involved Bam Margera throwing a cup of water on an unsuspecting victim, then punching him with a boxing glove.

Posted by MrGarabaldi at 8:21 AM