GI's having a lucky talisman or a "rabbit's foot" is common throughout history.  When I first got to Germany I found a "Magazine Clip Guide" or follower laying around and I clipped it to my helmet and kept it there throughout my Military career. 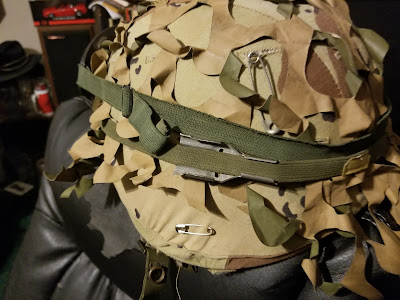 When I got deployed, I kept it there on my helmet when we got the "Chocochip" cover, I moved the band, gogglestrap, piece of camo-net(after flipping it over from green to brown) and my "Lucky Talisman".  It is human nature especially for a GI to believe in something that will protect him from bad things.  It sounds hokey I know but it is what it is.  When I got out I was able to keep my helmet and gear.  The Helmet right now is in my bonus room along with my other 2 GI helmets. 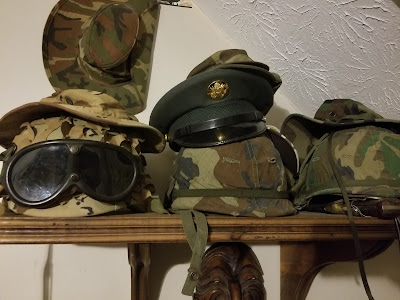 My Kevlar helmet in on the left, the middle helmet is my helmet I got when I got to Germany, I got the M1 pattern helmet and a week later I went back to CIF and got my Kevlar. and they didn't ask for the M1 pattern helmet back.  I got stuck working CIF for 30 days and I "accidentally" found a kevlar helmet that I kept and turned it in when I PCS'ed to my second duty station.  I kept this one and when I PCS'ed back to the world after Desert Storm I turned in the other helmet they had issued me.  The 3rd one on the far right is a Vietnam War era helmet that I found in a playground in Fort Benning in 1973 while my Dad was stationed there.


Superstitions have been around since the early days of humanity, so it is not surprising that military men have often conjured up superstitious beliefs themselves. Men who are facing such high risk of death or injury often would like to tie their good luck to a talisman, and military mascots have been incredibly common in the past, with lions being used in WW2, for example.
This article takes a look at some of the military superstitions that have built up throughout the years.

Perhaps the most famous of them all, this superstition seemed to develop during the Crimean War (October 1853 – March 1856) and has been referenced in books, films and songs in Western culture for most of the 20th century. The saying goes that it is bad luck for three soldiers to light their cigarettes from the same match and that one of the three would be killed, or the man who was third to light the cigarette on that match would be shot. An editorial in the Grand Rapid Leader in December 1919 references the superstition.

It has been alleged that the superstition was invented by a Swedish match magnate called Ivan Krueger to try and ruse people into buying more matches. However, the theory now goes that he was just taking advantage of the already prevalent belief.
The superstition was referenced in films as early as 1928 and continues to be alluded to in TV shows in the last decade such as Mad Men and Archer.

The nearest town to the Somme frontlines for the British troops was a little town called Albert. It was badly damaged during the war and rebuilt afterwards, and because of this there are few World War One sights to see in Albert above ground, but one feature of Albert was heavily associated with the war and became an icon at the time. The Golden Virgin on top of the Basilica is a golden statue of the Madonna holding her child up into the sky. It was visible from miles away and because of this was also the perfect target for enemy artillery.
It was damaged in January 1951, the statue was knocked but stayed leaning forward at an angle before the French secured it in that position. Due to its precarious tilt a superstition grew among the ranks that the war would end and Germany would win, when the statue fell.
The Golden Madonna spent most of the war leaning forward almost at a right angle to the ground and the belief only grew that when the statue finally fell to the ground the war would end. In 1918, when the Germans recaptured Albert during their Spring Offensive, the British realised the tower would make a great observation point for them and so deliberately bombed it, finally causing the statue to fall. Four months later, Albert was retaken by the British, and the Armistice happened a further three months after that.

The Basilica was rebuilt after the war and the Golden Madonna was replaced, where it continues to dominate the town and can be seen glinting for miles. It also serves as a tourist attraction now, allowing visitors to climb up the hundreds of stairs to stand on a small viewing deck beneath it and view the battlefields.


A more recent superstition rising from the American Marines comes from their food packages. The ‘Meal, Ready to Eat’, known colloquially as the MRE, will often contain Charms candy, so the  soldiers can have a sweet treat after their meal. Superstition tells that if a member munches on these during patrol the weather will turn on you, especially if you eat a green one, apparently. There have even been reports of Marines throwing the candies at enemies to cast the bad luck over to them.  We Army guys believed that the Army slipped saltpeter in our food to check our libido, don't know if that was true

American-born Edwin Parsons had a colorful military career, both in the US military and in the French Foreign Legion. He was known to have wired a stuffed black cat to the struts of his fighter aircraft as a talisman. He refused to fly without it. He even claimed after one fight that the cat took a bullet for him.
His plane was destroyed in a bombing raid and it took the lucky stuffed cat down with it. Some would wonder, at this point, whether or not the cat was actually lucky, but Parsons refused to fly until he could go back to Paris and find another one. Other aircrews often painted black cats on their planes for good luck.

Baron Manfred von Richthofen became the Red Baron after January 1917 when he received the Pour le Mérite (informally called ‘The Blue Max’), the highest military honor in Germany at the time. He took command of squadron Jasta 11 which contained some of the more elite German pilots, some of whom he had trained and who would go on to lead squadrons themselves. He decided to have his plane painted red and from then on flew in red-painted aircraft, primarily to scare his enemies. The red was not always a bright scarlet, but the aircraft had to be painted some shade of red. He also refused to fly without his lucky scarf and jacket.
Soon other members of the squadron would paint parts of their planes red too, in order to make the Red Baron seem less conspicuous and so he wouldn’t be singled out in battle, but the red became their unit identification and Richthofen became Der Rote Kampfflieger (the Red Fighter Pilot).
He was killed during combat in 1918 and buried with full military honors by the Allies.
Posted by MrGarabaldi at 9:00 AM