This one will be a short one compared to the one I did last week, I ran across a clip of Rodney Dangerfield visiting Johnny Carson and it was a laugh/riot so I googled information about Rodney Dangerfield and they mentioned the music video and after I saw it I remembered it being played a lot on MTV when they first started.

Rappin' Rodney is a 12-inch single released by American comedian Rodney Dangerfield in 1983. It is a rap-influenced novelty song co-written by J.B. Moore and Robert Ford Jr.; the same songwriters who worked with Kurtis Blow on "The Breaks". The accompanying music video, which includes cameos from Pat Benatar and Don Novello (as Father Guido Sarducci), was played heavily on MTV at the time of release. 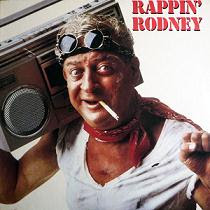 His 1980 comedy album, No Respect, won a Grammy Award. One of his TV specials featured a musical number, "Rappin' Rodney", which would appear on his 1983 follow-up album, Rappin' Rodney. In December 1983, the "Rappin' Rodney" single became one of the first Hot 100 rap records, and the associated video was an early MTV hit. The video featured cameo appearances by Don Novello (aka Father Guido Sarducci) as a last rites priest munching on Rodney's last meal of fast food in a styrofoam container and Pat Benatar as a masked executioner pulling a hangman's knot. The two appear in a dream sequence where Dangerfield is condemned to die and doesn't get any respect, even in Heaven, as the gates close without his being permitted to enter.
The single peaked at number 83 on Billboard's Hot 100 Billboard 200 chart and earned Dangerfield a nomination for the Grammy Award for Best Comedy Recording.