Yes Virginia, this is an unfiltered rant....Be warned... 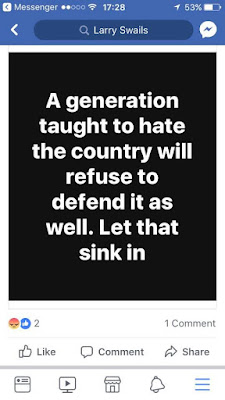 I saw this on my Dads facebook page, and it struck a chord as they say.   I have commented that in the past 20 years we have had generations of students that have been taught that the United States is the source of all evil in the world.  I have seen the videos on the campuses, all the protesting against the United States, They protest using our own system against us, they decry our system and rail against the system but anywhere else but here, they would not have the same rights, matter of fact, they would have a tire wrapped around them and set on fire.    These same students that have grown into adults and having families continue their belief that the United States is evil and that the West is evil.  And what really concerns me is that these people have no loyalty to this country and that they would undermine this in their honest belief that this country deserves to be humbled or conquered to atone for the past sins.  This belief is ideologically based,kinda like the Rosenbergs who betrayed the United States even though they lived here but they were loyal to the Soviets, this follows the usual methods for disloyalty  "MICE" or Money, Ideology, Compromise or Ego, the Rosenbergs fell under the "Ideology" part because they believed in the image of future socialism.  This crap comes straight out of the "Frankfurt School" where part of the lessons is to denigrate the traditions of a target country and replace them with values that are comparable of the goal of socialism/communism.
You see some of this on campus where the boys and especially white boys are being told that they are the source of all evil in the world and that they have to atone for the sins of their ancestors.  This is part of the cultural Marxism that is prevalent in the western based world, where people believe that the west is the scourge of the world and  needs to be eradicated.  You are seeing this in Europe where they are importing their own destruction.
What I am getting at is that there are a new generation of "Rosenbergs" that actually will work to undermine the United States, they hope to see a world where the United States no longer exist and the new utopia for the Earth will arrive in a beam of light as the new awakening.  I don't know what the future will hold but I do know that if the United States fades away, there will be no place else where western based thoughts on the sanctity of the individual is paramount, but where your caste, your family your tribe is more important.
Posted by MrGarabaldi at 7:00 AM