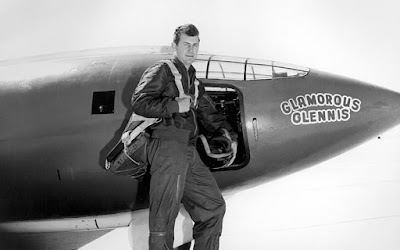 If there was ever a man that was hard to sum up in one headline, it might be Chuck Yeager. One could mention how he rose from the enlisted ranks to become a fighter pilot, or perhaps his four months fighting with the French Underground against Nazi Germany, or even that time he became a fighter pilot Ace in one day and still not tell the full story of this man.
For not only would this man’s service in World War II distinguish himself, but he would spend the next 30 years in service to his country that just so happened to include being the fastest human alive at one point. Chuck Yeager’s remarkable feat of being the first man to break the sound barrier is just but one bookmark in a novel that is the life of Chuck Yeager.

Chuck Jaeger was born on February 13, 1923, in a small West Virginia town. Growing up, he would excel at helping his father with mechanical issues they encountered and by the time he was a teen, it is reported he could disassemble and reassemble a Chevrolet engine with ease. Graduating high school in 1941, he took his mechanical skills to the US Army Air Forces and became an aircraft mechanic.
When the United States entered World War II and became in desperate need of pilots, they opened up the ranks to the enlisted and the young Chuck Yeager enthusiastically applied.
By 1943, he had received his flight wings and trained as a fighter pilot with a 357th fighter group out of Tonopah, Nevada. By November, he was headed to England where he would fly P-51 Mustangs with the 363rd fighter squadron.
Flying in his Mustang which he nicknamed after his girlfriend, Glamorous Glen, he took to the skies and scored his first victory before being shot down on his eighth mission over France in March of 1944. But thanks to the French Resistance, he was able to elude capture while assisting the French Underground in whatever manner he could. Thanks to the resistance, he was eventually smuggled to neutral Spain where he was then handed over to the British at Gibraltar.

Once back in England, he faced the terrifying aspect of being sent home due to a policy that escaped pilots were not to take back to the skies over France. The fear was that they could be shot down again and forced to give up members of the French underground. But a feisty Yeager took his case to Gen. Dwight Eisenhower himself and pleaded for the opportunity to fly again.
His point was that the Allies had already landed in France by this point, and very little risk to the French underground ensued if you were captured. Eisenhower approved in August of 1944, and Chuck Yeager was back in the skies over Europe gifting violence to the enemy.

Once back in the sky, Yeager proved it was worth the risk of sending him back up. On October 12, 1944, he downed five enemy aircraft in a single mission. Before the war was over, he claimed up to 12.5 air to air victories one of which was reported to be a Messerschmitt Me 262 jet fighter.
By Yeager’s own account, he reported that he would have had zero chance to actually catch the Jet fighter in the air were it not for the fact that he came upon it with its landing gear down on approach to the ground. But a kill is a kill and few men can claim that they took out one of the prized German jet fighters.
Before his military career would end, Yeager would know a thing or two about jet fighters himself. His remarkable flight abilities as proven in combat took him the route of becoming a test pilot for the newly formed U.S. Air Force. Only having a high school education, Yeager found the advanced academics quite challenging while the actual flying came quite naturally.
He believed his experience as a mechanic helping him intuitively know how to push a craft to its limits.   I remember reading from his book that he had a "Feel" for the aircraft and the airplane would "Tell me" before any failure.  I also remember the term"Ground Effect", it was a pocket of air just above the ground that would be good for some more lift as a last ditch effort. And not being one to shy away from a challenge, he enthusiastically embraced the opportunity to be the first man to break the presupposed daunting wall of the sound barrier.
Piloting his Bell X1 aircraft, on October 14, 1947, Chuck broke the sound barrier flying the Bell X-1 at a speed of mach 1.07 at an altitude of 45,000 feet. But this man wasn’t done yet.


After achieving national fame for his feat, he continued to serve with distinction in the United States Air Force for almost another 30 years. Moreover, his time flying over hostile territory wasn’t quite done yet either.
In 1966, now a full Colonel, he took over the 405th tactical fighter wing based out of the Philippines. From here, his squadrons were regularly deployed to Vietnam where Yeager himself flew over 120 combat missions. In 1975, the man who began his military career as an Army private aircraft mechanic retired a Brigadier General as one of the most accomplished men to ever take to the skies.

Chuck Yeager would see part of his life played out in the 1983 film, The Right Stuff, where his character was played by Sam Shepard.  And while it might seem that having part of your life story told in a Hollywood movie is quite an accomplishment, for Chuck Yeager it was but one small chapter in a fascinating novel of human existence.

But for Chuck, he seems to still be writing that novel with each new day. Still alive to this day and well past 90, Chuck Yeager lives on as a man in history who truly does not know how to quit.

Each chapter in his life could make its own movie, and any writing about the man short of a novel can only tease others to dig deeper.  There is no doubt that Brig. Gen. Chuck Yeager has the right stuff to leave a legacy for which mankind should strive to replicate.