Some information on Prime Minister Tojo

I was doing some background and started digging and found some information on Prime Minister Tojo, he was the boogieman used on all the posters that the allies depicted, by today's standard they are considered "racist" but the times and standards were different back in WWII.  He was widely believed for pushing for war against the United States to give Japan the "breathing room" to expand in the pacific to create the "Greater East Asia Co-Prosperity sphere".  He wanted the United States out of the way so Japan could seize the resource rich areas to support their expansion into China. Hideki Tojo, a general and a politician, was the true representative of the Japanese expansionist policy in China in the first half of the 20th century. A military child himself, he advanced through army ranks completing his education in the Army Cadets School as 10th in his class (out of 363 cadets).
In 1905, he was commissioned as a second lieutenant in the Imperial Japanese Army. Tojo proved to be more of an administrative type and in 1928, he became the bureau chief of the Imperial Army. He was promoted to the rank of colonel. In his spare time, Colonel Tojo studied militarist policy that was popular at the time, fueling his ambitions as a conqueror.
In 1934, Tojo continued his rise within the political structures of The Japanese Empire and became a major general serving as Chief of the Personnel Department within the Army Ministry. In 1935, he was in China leading the notorious Kempeitai section of the Kwantung Army in Manchuria. This is where he earned his nickname “Razor” for his sharp decision making and cold-blooded cruelty. Politically, he developed his hard-line stance as a fascist and an ultra-nationalist loyal to the Emperor. 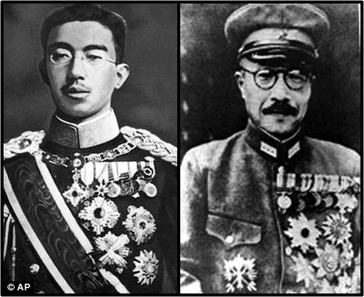 Emperor Hirohito and Prime Minister Tojo
The 30s in Japan were marked by political turmoil between two factions within the military. The first faction advocated the expansion on the territory of the Soviet Union and unprecedented loyalty to Emperor Hirohito while the “Young Officers” wanted to reduce the power of the Emperor and the ruling elite while emphasizing colonial conquest in China. Other than the two factions, there was a number of secret societies that lurked the Japanese government from shadows in the 1930s.
The friction between these groups erupted on February 26, 1936, when a band of young officers staged an attempted coup d’etat which backfired when the “old school” showed them who’s the boss. Tojo aligned himself with Sadao Araki, the Minister of War and an experienced Japanese general, who opposed the restless youth within the Army. The rebels were trialed and executed, and the remaining Army factions were unified.
Tojo, being on “the right side” gained political points and quickly rose through the ranks in Manchuria. He was promoted to Chief of Staff of the Kwantung Army in 1937.


As Chief of Staff, Tojo was responsible for the military operations designed to increase Japanese penetration into the Inner Mongolia border regions with Manchukuo. In July 1937, he personally led the units of the 1st Independent Mixed Brigade in Operation Chahar against the Chinese rebels.
This was his only real combat experience, but he proved that he was up to the task. The operation was vital in crushing the resistance in northern China and Mongolia, so Tojo gained popular support as well as the support of leading politicians. 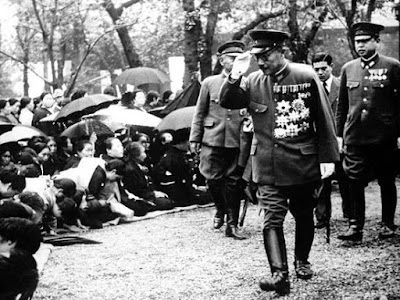 This is how he paved his way into high-level policy, becoming an Army Minister. Tojo played an important role in joining the Tripartite Pact together with Italy and Germany and in negotiating the occupation of Indochina after the fall of France. The animosity between the US and Japan started to flourish, as the US proclaimed  a total embargo on oil and gasoline exports to Japan.
Under the guidance of the Navy and the Army, Emperor Hirohito leaned towards a more aggressive policy. Hideki Tojo was declared Prime Minister, replacing the more cautious and politically moderate Fumimaro Konoe.
Some political structures in the early 1940s in Japan weren’t so eager in entering a war against the United States and negotiations were desperately held between the two parties, with no chance of finding a common language. The scenario of Pearl Harbor was already drafted by the Navy in case the negotiations fail. Fleet Admiral Osami Nagano explained in detail the Pearl Harbor attack to Hirohito.
The eventual plan drawn up by Army and Navy Chiefs of Staff envisaged such a mauling of the Western powers that Japanese defense perimeter lines—operating on interior lines of communications and inflicting heavy Western casualties—could not be breached. Prime Minister Hideki Tojo went down in history as the man who gave the executive order to attack Pearl Harbor.


An interesting fact was that Tojo held on to his position as the Army Minister while being the Prime Minister of Japan. The atrocities committed in China were often guided by his supervision. On top of that, Tojo held the positions of Minister of Education, Minister of Commerce and Industry, Home Minister and Minister of Foreign affairs throughout his four year term as the Prime Minister of Japan.
In this way, he left his mark all across the wartime government, imposing imperialistic foreign policy, militaristic education, strict political control over the population and exploitation of industry to keep the Japanese war machine running.


He gradually lost support after the Battle of Midway in 1942 and was finally replaced on 22 July 1944. After the unconditional surrender of Japan in 1945, Tojo was arrested by the orders of general Douglas McArthur. He was put on trail for numerous charges, most of them indicating his full responsibility in waging war against the Allies, maltreatment of POWs and genocides in China.
After the trial, he was found guilty on eight of those charges. Some claimed that McArthur was protecting Emperor Hirohito from charges in order to maintain peace in Japan, thus making Tojo the main culprit of the war and the face of the Japanese terror. After he was sentenced to death, Tojo stated: 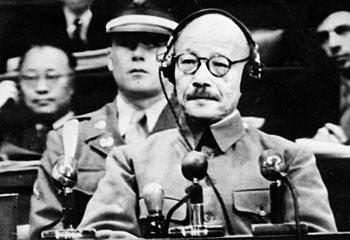 “It is natural that I should bear the entire responsibility for the war in general, and, needless to say, I am prepared to do so.”
Today, Hideki Tojo is still a controversial figure in Japan, as part of his ashes remain buried in the Yasukuni Shrine, which provides sanctuary to deceased Japanese WWII veterans – including the ones convicted of war crimes. 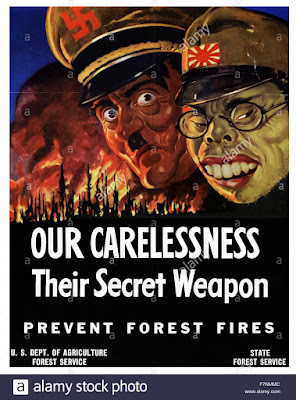 A propaganda photo of Adolf Hitler and Prime Minister Tojo
Posted by MrGarabaldi at 7:00 AM