I decided to go with a TV theme, I remembered watching this movie on HBO in the early 1980's.  It was a really cool movie and for the time the computer interaction was cutting edge.  The movie premise besides the models wanting to be "Perfect" according to the computer, it also explained how commercials can be subliminal in their targeting.  the movie was way ahead of its time as far the subject matter ...and Susan Dey had a very nice set of "Friends" in the movie.  I have the movie on DVD and watched it a few years ago, some of the stuff was corny, but the movie still to me held the test of time as far as storytelling and the subject matter is still relevant.  Also the opening theme was really good, to me it was a cool song kinda edge and later to me it became "New Wave" before New Wave really starting to hit,  and the song telling a story.

Sue Saad and the Next was an American new wave band from Los Angeles, California. Its self-titled first album reached No. 131 in the US Billboard 200 in 1980. Although sometimes characterized as one hit wonders, the band achieved a cult following following their breakup in 1986. Sue Saad and the Next also provided part of the soundtracks for several films during the 1980s such as Roadie (1980), Looker (1981) and Radioactive Dreams (1985). Saad performed in Radioactive Dreams and voiced the main theme for Looker. 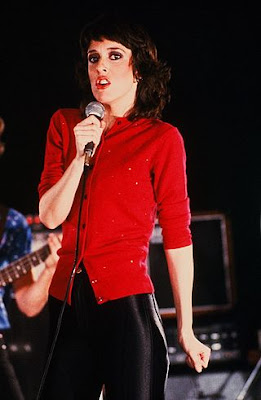 Looker is a 1981 science fiction film written and directed by Michael Crichton and starring Albert Finney, Susan Dey, and James Coburn. Former NFL linebacker Tim Rossovich is featured as the villain's main henchman.
The film is a suspense/science fiction piece that comments upon and satirizes media, advertising, TV's effects on the populace, and a ridiculous standard of beauty.
Though spare in visual effects, the film is notable for being the first commercial film to attempt to make a realistic computer-generated character, for the model named Cindy. It was also the first film to create three-dimensional (3D) shading with a computer, months before the release of the better-known Tron. 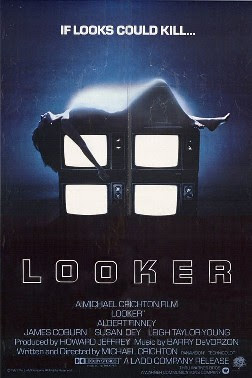 Dr. Larry Roberts (Albert Finney), a Beverly Hills plastic surgeon, is puzzled when four beautiful models working in television commercials request cosmetic surgery to make changes so minor as to be imperceptible to the naked eye. When these models later start dying under mysterious circumstances, he discovers they are all linked to the same advertisement research firm.
The Digital Matrix research firm rates advertising models using a scoring system to measure the combined visual impact of various physical attributes in television commercials. In an experiment to increase their scores, some models are sent to Dr. Roberts to get cosmetic surgery to maximize their visual impacts. Though the models are physically perfect after the surgeries, they still are not as effective as desired, so the research firm decides to use a different approach. Each model is offered a contract to have her body scanned digitally to create 3D computer-generated models, then the 3D models are animated for use in commercials. The contract deals seem to be incredibly lucrative for the models: once their bodies are represented digitally, they get a paycheck for life, never having to work again, since their digital models are used for all their future work in commercials.
However, when these same models start dying under mysterious circumstances, Roberts becomes suspicious and decides to investigate Digital Matrix. He has a strong interest in investigating the deaths: He is considered a prime suspect by the police (from evidence planted at the scene of one of the murders) and his most recent patient, (with whom he is involved in a relationship) Cindy (Susan Dey), is the last of the models to be digitally scanned.


During his investigation, Roberts discovers some advanced technology devices the Digital Matrix corporation is using to hypnotize consumers into buying the products they advertise. He also discovers the Light Ocular-Oriented Kinetic Emotive Responses (L.O.O.K.E.R.) gun, a light pulse device that gives the illusion of invisibility by instantly mesmerizing its victims into losing all sense of time.
Posted by MrGarabaldi at 5:30 AM