I am a huge fan of "The Far Side" comics, one of my favorite all time comics is this one...

We used "white out" to change the words in the cartoon while we were in Germany and subsitute names of our fellow soldiers to make the point more personal.  It provided a lot of humor for us.
Now on the reason for this post, I have on my blogroll The Abode of McThag.  He is a real good guy and has a warped sense of humor, but everytime I click on the Link to his blog I think of this cartoon from the "Far Side". 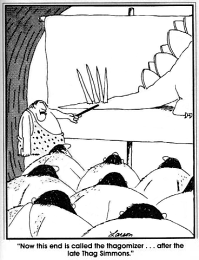 I hope Angus don't mind my putting a spotlight on his blog.  He is a good guy and a very serious gamer and he also puts out a lot of cool stuff on stabby things and many other articles.   If you don't have him bookmarked or on your blogroll, you are missing out.

A thagomizer is the distinctive arrangement of four to ten spikes on the tails of stegosaurid dinosaurs. These spikes are believed to have been a defensive measure against predators.
The arrangement of spikes originally had no distinct name; the term Thagomizer was coined in 1982 by cartoonist Gary Larsonin his comic The Far Side, and thereafter became gradually adopted as an informal term within scientific circles, research, and education. 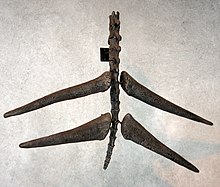 Thagomizer on mounted Stegosaurus tail
There has been debate about whether the spikes were used simply for display, as posited by Gilmore in 1914,[ or used as a weapon. Robert Bakker noted that it is likely that the stegosaur tail was much more flexible than those of other ornithischiandinosaurs because it lacked ossified tendons, thus lending credence to the idea of the tail as a weapon. He also observed that Stegosaurus could have maneuvered its rear easily by keeping its large hindlimbs stationary and pushing off with its very powerfully muscled but short forelimbs, allowing it to swivel deftly to deal with attack.  In 2010, analysis of a digitized model of Kentrosaurus aethiopicus showed that the tail could bring the thagomizer around to the sides of the dinosaur, possibly striking an attacker beside it. 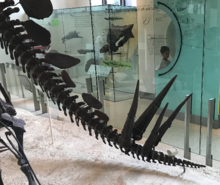 A thagomizer on the tail of a Stegosaurus fossil
In 2001, a study of tail spikes by McWhinney et al., showed a high incidence of trauma-related damage. This too supports the theory that the spikes were used in combat. There is also evidence for Stegosaurus defending itself, in the form of an Allosaurus tail vertebra with a partially healed puncture wound that fits a Stegosaurus tail spike. Stegosaurus stenops had four dermal spikes, each about 60–90 cm (2.0–3.0 ft) long. Discoveries of articulated stegosaur armor show that, at least in some species, these spikes protruded horizontally from the tail, not vertically as is often depicted. Initially, Marsh described S. armatus as having eight spikes in its tail, unlike S. stenops. However, recent research re-examined this and concluded this species also had four 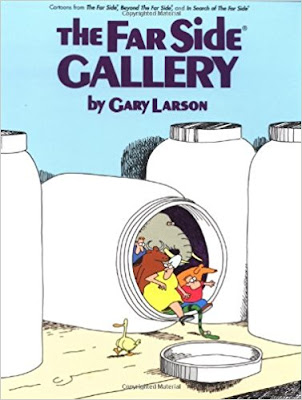 The term "thagomizer" was coined by Gary Larson in jest, in a 1982 The Far Side comic in which a group of cavemen in a faux-modern lecture hall are taught by their caveman professor that the spikes on a stegosaur's tail are so named "after the late Thag Simmons".
The term was picked up initially by Ken Carpenter, a paleontologist at the Denver Museum of Nature and Science, who used the term when describing a fossil at the Society of Vertebrate Paleontology Annual Meeting in 1993. Thagomizer has since been adopted as an informal anatomical term, and is used by the Smithsonian Institution,[the Dinosaur National Monument, the book The Complete Dinosaur and the BBC documentary series Planet Dinosaur.
The cartoon fate of Thag Simmons notwithstanding, stegosaurs and humans did not exist in the same era; humans evolvedaround 60 million years after the event that killed all non-avian dinosaurs, and some 120 million years after stegosaurids went extinct. In The Prehistory of the Far Side, Gary Larson suggests that "there should be cartoon confessionals where we could go and say things like, 'Father, I have sinned – I have drawn dinosaurs and hominids together in the same cartoon.
Posted by MrGarabaldi at 6:00 AM