Pickett's Charge and the high water mark for the Confederacy.

I normally do historical stuff on WWII or Vietnam or a couple of other wars, I do know a bit about the Civil War or The War between the States as it is referred to here in the South and to a few "The War of Yankee Aggression."  I do know that Pickett's charge was considered the highwater mark for the confederacy militarily.  This is the closest that the South would have had the chance to get recognized by Britain and France.  I also know that General Lee didn't blame Pickett for what had transpired, he had known that Pickett's division had done all what was humanly possible. 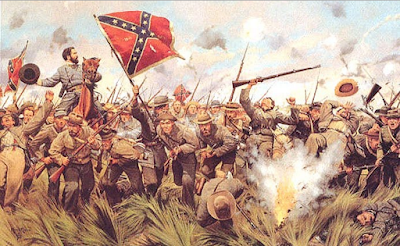 What had been a three-day showdown between the Union Army under the command of Major General George G. Meade and General Robert E. Lee’s Confederate forces reached its peak on the third and final day of the battle, July 3, 1863.
Pickett’s Charge was one of the most devastating infantry attacks recorded during the American Civil War. The charge led by George Edward Pickett, Confederate States Army general is best known for leading his division into the center of the Union lines.
The previous fighting which had transpired on July 1-2 left neither the Union or Confederate armies significantly better off.
General Lee’s military secretary, gave the following description of Lee’s plan for the attack on July 3:
“There was a weak point…where Cemetery Ridge, sloping westward, formed the depression through which the Emmitsburg road passes. Perceiving that by forcing the Federal lines at that point and turning toward Cemetery Hill, Hays’ Division would be taken in flank and the remainder would be neutralized….Lee determined to attack at that point, and the execution was assigned to Longstreet.”
George Pickett was one of the three division commanders under General Lee’s “Old War Horse” James Longstreet. Pickett’s division consisted of three brigades as General Montgomery D. Corse’s Brigade was ordered to remain in the region of Taylorsville. However, all these units were fresh having arrived late on the previous day.
On July 2, just two hours past midnight, the soldiers started their twenty-five mile march to Gettysburg, arriving late in the evening.
In a council of war held by Union forces on the eve of July 2, Major General George G. Meade speculated about Lee’s line of attack to engage the center of his defenses. He correctly surmised that Lee would challenge the center of his lines having failed on both his flanks on preceding days
General Lee’s initial plan on the 2nd day was to send General Longstreet to attack the left flank of the Union forces with Lt. Gen. Richard S. Ewell leading the attack on Culp’s Hill on the Union right.
However, while Longstreet was gathering his men, Union forces started a massive military bombardment against Ewell’s troops at Culp’s Hill and after a gruesome seven hours of battle, the Union Army had managed to hold their positions. Despite the early engagement by Ewell’s forces and their failure to take Culp’s Hill, Lee continued his offensive strategy to strike right at the center of the Union line on Cemetery Ridge.
Brigadier General Henry J. Hunt came up with a brilliant idea to hold fire from their center lines when the Confederates carried out an artillery bombardment against their position early on in the afternoon. This led the Confederates to believe that their enemy’s batteries had been knocked out.
This further encouraged Lee’s decision to attack there and around 3 p.m., when the firing had died down, 12,500 Confederate soldiers in nine infantry brigades came tearing down the 1300 yards that led to the Cemetery Ridge.
Pickett commanded his three brigades on the right while Joseph Pettigrew with his four brigades and Trimble’s two brigades were on the left. As the infantry advanced, Union soldiers began hailing “Fredericksburg!,” referring to a previous charge which they, the Union forces attempted and failed in the 1862 Battle of Fredericksburg.
Union forces reigned artillery fire from the flanks of Cemetery Hill, and heavy musket and canister fire came from Hancock’s II Corps. As Pickett and the others drew closer, the Union forces unleashed a heavy fire on their attackers, much to the surprise of the Confederate commanders and General Lee.
The charge only got as far as the low stone wall that acted as a shield for the Union soldiers, breaching it and temporarily breaking the U.S. lines; Confederate and Union soldiers battled and brawled, clawing at each other in an urgent attempt to hang on to their positions, one side advancing and the other defending until reinforcements were sent in, breaking off the Confederates’ short contact with the opposing forces and pushing them back.
Massive casualties were sustained on the side of the Confederates; a hailstorm of projectiles were fired at Pettigrew’s men, while the other divisions also encountered heavy fire, sustaining losses too great to continue the march further.
General Lee’s army was exhausted and depleted both in ammunition and in physical condition. He thereafter ordered the retreat of his men and the three-day battle was finally over, resulting in a huge number of casualties on both sides.
During the three days of fighting, over 560 tons of ammunition were fired resulting in over 50,000 casualties almost equally shared by the Confederate and Union Armies, making this one of the bloodiest battles of the American Civil War.
General Pickett’s Virginian brigades went furthest in the assault, making a turn in what is called “the Angle” at the edge of the stone wall. Their position marks what is called the “High-water mark of the Confederacy,” arguably representing the closest the Confederates ever got to achieving independence from the Union through military action.
General Lee gathered his wounded and exhausted Army, taking a whole day to prepare his retreat. However, Meade’s army did not try to pursue giving the reason that his army was also too battered and exhausted. Having had his own fill of bloodshed for the day, he allowed the Confederates to make their exit without further contact.
Pickett remained embittered long after the war, recounting in his memory the massive number of men he lost that day.  As I recall General Longstreet did blame the defeat on Pickett and his men.
Posted by MrGarabaldi at 10:01 PM