Fighting that continued after the surrender of WWII

This is part of my series of articles that I have written in the past about postwar Germany right after the end of WWII and before Germany was formed as a republic in 1951.  The surrender didn't happen immediately, there were cases of German U-boats that didn't know of the surrender until weeks later.

It’s easy to imagine that once World War II officially ended, the defeated Germans forces were so anxious to get home that they dropped their guns where they stood, stripped off their uniforms, and quickly surrendered from exhaustion, hunger, and stress.
Not quite. 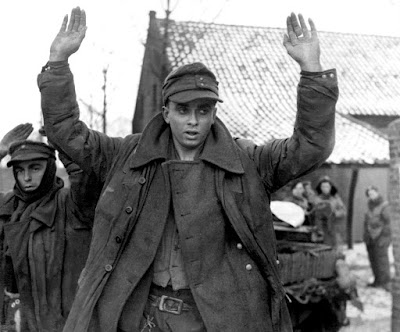 Many German soldiers were caught by surprise when Hitler’s second in command, Karl Donitz, signed the instrument of unconditional surrender in Berlin in 1945. By then, as we know, Hitler himself was dead of a self-administered cyanide dose in his bunker, along with his mistress, Eva Braun. 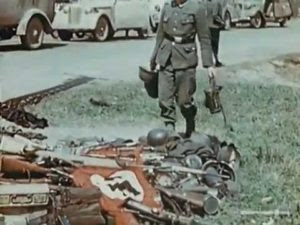 But trying to stop a war in its tracks is a little like coaxing a hippo into doing a pirouette: impossible. In reality, it took months for the war to end. In some cases, Germans were terrified of surrendering to the Russians, from whom they feared the worst treatment. In total, the surrender took four months to go fully into effect and halt all skirmishes.

When the fighting ceased on the Russian front, many German soldiers raced to reach Allied forces, fearing the Soviets would be merciless in their treatment of POWs. Along the coast of Gdansk, they fought not for Hitler anymore, but for their very lives. Finally, they had to surrender to the Red Army in early May. 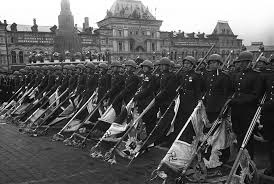 Captured German battle Standards displayed on Red Square after the Surrender.
As the Germans retreated, brief but fierce battles broke out on the Balkan and even on some occupied Greek Islands. As news of the Allied victory spread, men serving on the German U-Boat 234, loaded with half a ton of uranium intended to aid the Japanese, headed for America instead. Its captain, Johann-Henrich Fehler, was terrified of being caught by the British or Canadians and felt the U.S. would be less harsh in its treatment of his crew. Two Japanese men on board killed themselves, rather than face detention in a POW camp.


Another incident that took place rather slowly was the British recapture of the Channel Islands. Churchill was in no rush to round up the Germans, who had occupied the islands since their invasion in 1940, saying “let them starve.” Eventually, there was a peaceful surrender in mid-May.

The bloodiest incident that took place after Germany’s defeat was a mutiny on the Dutch isle of Texel.
Germany had forced some Georgian citizens into service during the war, as part of its Atlantic Wall Defence Force. However, on April 5th, the Georgians launched a mutiny in an effort to shed themselves of Germany’s control. Resisters killed 800 German soldiers while they slept.
This infuriated the Germans, who sent 2,000 troops to the island to squash the rebellion. And squash it they did, at the cost of 565 Georgian men, 120 Dutch citizens, and 812 German soldiers. The long-awaited Allied invasion finally happened on May 20th.


Perhaps the best-known individual from the war’s conclusion is U-Boat Captain Heinz Schaffer, who wrote a book about his exploits, “U-977 – 66 Days Under Water.”
Schaffer was given the unappealing assignment of steering his sub to Britain in a suicide mission designed to destroy all the British boats he could before he himself was destroyed. But when he got word that Germany was defeated, he headed instead for Argentina, where he hoped to find asylum. Unfortunately for him, the Argentine government immediately turned him over to the Americans, who kept the sub as a kind of macabre war memento.

Posted by MrGarabaldi at 1:08 AM