Monday Music "The Boys of Summer" by Don Henley

I decided to change things up a bit, I will run the next few "Monday Music" with my favorite songs, the songs if they ever would let me run a segment on Sirius/XM or something and they would want me to play some of my favorite songs.    The "Boys of Summer" came out in early 1984 and it became my favorite song, replacing Manfred Mann Earth Band "Blinded by the light" and it was my favorite song until this one came along about a decade later.  This song has stood the test of time for me, it still is my favorite song, I can listen to it over and over again, there are only a few songs that I can do that with.  I will run "My favorite songs" theme for the next month or so.


"The Boys of Summer" is a song released in 1984 by former Eagles vocalist and drummer Don Henley, with lyrics written by Henley and music composed by Henley and Mike Campbell.
It is the lead track and first single from Henley's 1984 album Building the Perfect Beast and reached the top five in the United States as well as the top position on the Top Rock Tracks chart. The song's music video won many awards. "The Boys of Summer" was also performed live by Henley with the reunited Eagles; such a version is included on the group's 2005 Farewell 1 Tour-Live from Melbourne DVD. 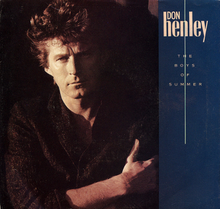 Henley's song has a haunting rhythm and timbre, cemented by Campbell's 1-7-5 repetitive riff over a vi-IV-V-IV chord pattern. Superficially, the song appears to be about the passing of youth and entering middle age, with the theme of 'summer love' apparent in the choruses, and of reminiscence of a past relationship.
In a 1987 interview with Rolling Stone, Henley explained that the song is more about aging and questioning the past—a recurring theme in Henley's lyrics (cf. "The End of the Innocence", and "Taking You Home".
In an interview with NME in 1985, Henley explained the 'Deadhead sticker on a Cadillac' lyrics as an example of his generation selling out:


"I was driving down the San Diego freeway and got passed by a $21,000 Cadillac Seville, the status symbol of the Right-wing upper-middle-class American bourgeoisie – all the guys with the blue blazers with the crests and the grey pants – and there was this Grateful Dead 'Deadhead' bumper sticker on it!"


In an interview with Knoxville.com, Neil Giraldo, Pat Benatar's guitarist and husband, says that Henley came in the studio while he was in the process of recording the song "Love Is a Battlefield" using an up tempo beat, and asked Giraldo if he could steal the sound for use in his song, "The Boys of Summer", to which Giraldo gave his permission.

"The Boys of Summer" reached number 5 on the Billboard Hot 100 and topped the Billboard Top Rock Tracks chart for five weeks. It was also a hit in the United Kingdom, reaching number 12 on the UK Singles Chart. A re-release of the single in 1998 also reached #12.
In 1986, Henley won the Grammy Award for Best Male Rock Vocal Performance for the song.
"The Boys of Summer" was ranked #416 on Rolling Stone magazine's list of The 500 Greatest Songs of All Time.

The music video to "The Boys of Summer" is a French New Wave-influenced piece directed by Jean-Baptiste Mondino. Shot in black-and-white, it shows the main character of the song at three different stages of life (as a young boy, a young adult and middle-aged), in each case reminiscing about the past relationship. This is shown during the line "A little voice inside my head said don't look back, you can never look back" at which point, each of the three people look back in turn. The young boy in the video, played by seven year old Josh Paul, resembles a young Don Henley. The girl in the music video is played by Audie England. The cutaways of the "boys" jumping in the air appear to have been influenced by the 1938 film Olympia. Interspersed with these scenes are segments of Henley miming the words of the song while driving in a convertible. At its conclusion, the video uses the post-modern concept of exposing its own workings, as with a wry expression Henley drives the car away from a rear projection screen.
The video won the Video of the Year at the 1985 MTV Video Music Awards (leading Henley to comment at the Awards the following year that he had won for "riding around in the back of a pickup"). It also won that year's awards for Best Direction, Best Art Direction, and Best Cinematography. The Best Direction award was presented to Mondino by Henley's then-former Eagles bandmate Glenn Frey.
Posted by MrGarabaldi at 6:00 AM