I consider the Panther Tank the all around best German Tank, it had the armor to stand up to the T34/85 and of course the undergunned American Tanks like the Sherman. The later tanks like the Pershing were better armed and of course the American Tank destroyers were better armed.  The British Shermans called the "Firefly" had the excellent British 17 pounder gun(76 mm) The Panther was developed in response to the T34 tank that the Germans ran across right after they started Operation Barbarossa and to their shock discovered that their Panzer Mark III and Panzer Mark II's were woefully undergunned and the few Panzer Mark IV's had the 50 MM gun and it had problems.  The Germans had to use the legendary 88 to take out the better armed Soviet Tanks. 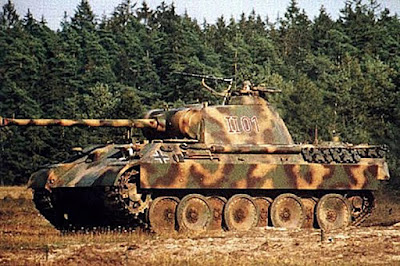 The German Panther tank was deployed during the Second World War in the European Theater, between the years 1943 and 1945. It saw action on both the Eastern and Western fronts, and is widely hailed as one of the best tanks designed and produced during the conflict.
The Panther was the third most-produced German armored fighting vehicle, after the Sturmgeschütz III assault gun/tank destroyer at 9,408 units, and the Panzer IV tank at 8,298 units.
They proved to be extremely popular, and as a result more than 6000 Panthers were built for the German military. More surprisingly, however, is the fact that nine of these tanks were built by the British Army between 1945 and 1946. This alone is a testament to the high quality of these remarkable war machines 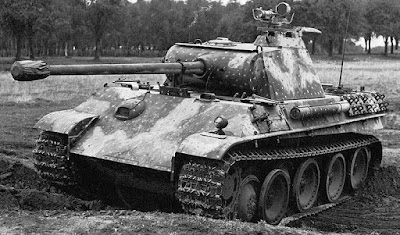 There were three main version of the Panther – versions D, A and G – with each new version incorporating significant improvements. There were also the artillery spotter, recovery, and Commander versions.
The full name was the Panzerkampfwagen V Panther and it had the ordnance inventory designation of Sd.Kfz. 171. However, on 27 February 1944, Hitler ordered that the Roman numeral “V” be deleted from the designation.
This wan’t the only way in which Hitler was directly involved with the tank’s design. The Panther was originally meant to weigh 30 tons, but the Nazi Leader demanded extra armor and a heavier gun and so it ended up weighing almost 50 tons.


Hitler later ordered a Panther II which would feature more armor while still maintaining the same gun, one prototype of which prototype was captured by the Americans. The project was quietly cancelled in mid-1943.
Although weighing a great deal, they could still move at a considerable pace. The later models had a top speed of 46km/h, roughly as fast as the Tiger and slightly faster than the Sherman tank.
These powerful tanks could be used to devastating effect on the battlefield. One of the top German Panther commanders was SS-Oberscharführer Ernst Barkmann of the 2nd SS-Panzer Regiment “Das Reich”. By the end of the war, he had some 80 tank kills claimed.
The Panther tank uses an engine very similar to the one used in the Tiger Tank, with an average life of 1500 hours. The Panther tank came into service after the Tiger tank, the Panther being first used in combat in July 1943 in Kursk whereas the Tiger was first used in Leningrad in December 1942.

Panther tanks were captured on certain occasions and put to use by Germany’s enemies. At least two Panthers were commandeered by the Polish resistance in the early days of the Warshaw uprising, although they were immobilized after several days due to lack of fuel, and were then set on fire.
Russian troops also captured several Panthers, turning them against the Nazis along the Eastern Front. They abandoned them once the tanks broke down, however, as they were deemed too complicated and too difficult to repair.
The Panther had a 7.5 cm main gun that could carry 40 rounds of anti-tank ammo and 39 high explosive shells. It also had two MG 34 machine guns with 5100 rounds of ammunition. The tank needed a crew of at least five men, including a commander, driver, gunner, loader, radioman and machine gunner.

The Panthers saw a great deal of action during their years in service. At their peak in September 1944 there were 552 Panthers operational on the Eastern Front, out of a total of 728. Later, during the Battle of the Bulge, the Germans used 400 Panther Tanks, five of which were disguised to look like American M10 Tank Destroyers. They did this by welding on additional plates and applying US-style camouflage paint and markings.
There are thought to be five surviving Panthers in running order, two of which were built by the British Army. There are a lot more non-runner Panthers out there in museums, as monuments or in the hands of private collectors.
The last operational report dated March 15, 1945, lists 361 operational out of 740 Panther tanks.
Postwar Use :
Although a technologically sophisticated vehicle, the Panther's design had a very limited influence on postwar tank development. The French postwar AMX 50 tank prototype was indirectly influenced by it through the Entwicklung series, but never entered series production. It is claimed that the Panther was arguably a forebear to the modern main battle tank.
The Panther itself also saw some limited use outside the German military, both before and after 1945. 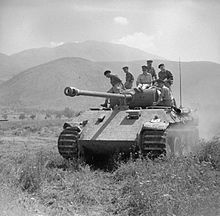 During the war, the Red Army employed a number of captured Panthers. These were repainted with prominent Soviet emblems and tactical markings to avoid friendly fire incidents. Unlike captured Panzer IVs and StuGs, the Soviets generally only used Panthers and Tigers that had been captured intact and used them until they broke down, as they were too complex and difficult to transport for repair. Panzer IVs and StuGs, on the other hand, were so numerous in terms of spare parts and easy to repair that they could be used over a much longer period in combat conditions.
During March–April 1945, Bulgaria received 15 Panthers of various makes (D, A, and G variants) from captured and overhauled Soviet stocks; they only saw limited (training) service use. They were dug down, with automotive components removed, as pillboxes along the Bulgarian-Turkish border as early as the late 1940s. The final fate of these pillbox Panthers is unknown, but sources indicate that they were replaced and scrapped in the 1950s.
In May 1946, Romania received 13 Panther tanks from the USSR. They were initially used by the 1st Armoured Brigade, but in 1947 the equipment was ceded to the Soviet-organized "Tudor Vladimirescu Division", which was transformed from a volunteer infantry division into an armoured one. The Panther tank was officially known as T-V (T-5) in the army inventory. These tanks were in poor condition and remained in service until about 1950, by which time the Romanian Army had received T-34-85 tanks. All of the tanks were scrapped by 1954. The tanks were different models: Ausf A, Ausf D, and Ausf G.They were shown to the public in 1948, during the 1 May parade in Bucharest, painted with Romanian markings. Until 1950, the T-V (T-5) was the heaviest tank available to the Romanian Army.

During the Warsaw Uprising, the Polish Home Army captured and used two Panther tanks. One, nicknamed Magda, was used by Batalion Zośka's armored platoon under the command of Wacław Micuta to liberate the Gęsiówka concentration camp.
One captured vehicle (named "Cuckoo") also saw service with the British Coldstream Guards for some time.
Germany sold Japan a single Panther along with a Tiger in September 1943; by the time it was ready in 1944, it was impossible to ship due to Allied naval interdiction.
In 1946, Sweden sent a delegation to France to examine surviving specimens of German military vehicles. During their visit, the delegates found a few surviving Panthers and had one shipped to Sweden for further testing and evaluation, which continued until 1961. The tank is on display in the Deutsches Panzermuseum in Munster.
After the war, France was able to recover enough operable vehicles and components to equip the French Army's 503e Régiment de Chars de Combat with a force of 50 Panthers from 1944 to 1947, in the 501st and 503rd Tank Regiments. In 1947, the French War Ministry wrote an evaluation of them entitled Le Panther 1947. These remained in service until they were replaced by French-built ARL 44 heavy tanks.
The last 'production' Panthers were produced at the factory by German staff just after the end of World War II under the supervision of the Royal Electrical and Mechanical Engineers (REME) using available components. 9 Panthers and 12 Jagdpanthers were produced and shipped back to Britain for post-war trials. A complete Panther and a complete Jagdpanther produced this way are now at the Bovington Tank Museum, Dorset, with brass plates on them, explaining their history.
Posted by MrGarabaldi at 6:00 AM