Monday Music "Already Gone" by the Eagles and some other stuff

I am continuing my series of songs that I can play over and over again. And it is on Tuesday...Eh it happens...
I kinda went on a vacation, after attending a seminar/work session and we were told that we needed to read a book called "Good to Great", how certain companies defied the odds and were great, far exceeding the S&P and the Dow.  How they did it and why.  It was a very interesting read. 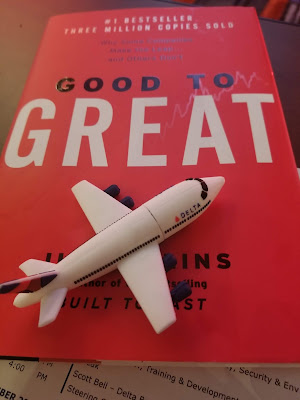 The plane is a USB Card,
I also was treated to the "Medieval Times", which is a show and dinner, and it was interesting eating food with no utensils, I being a former GI and scout leader didn't have problems with that 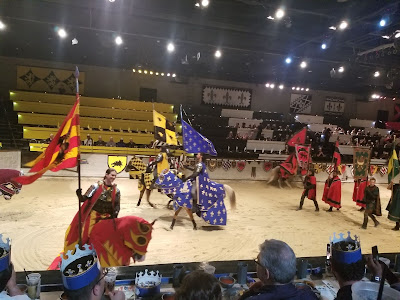 The show was neat, I knew that the show was an act, but they really got into it and the choreography was evident in the performance.  After finishing the seminar from work, I flew down to Florida to catch up with the spousal unit and my son who was visiting my brother, sister in law and my niece.  They live near Pensacola and I like the panhandle area.  If my employer had a facility in that area, I would consider transferring.    While I was there, I was talking to my brother and I mentioned that I had posted a couple of pics that I had taken while I was in Germany and in the Gulf and I mentioned that when I had visited him in the gulf, I wish that I had someone take a pic of us being together.   I then went to harass my son about something and my brother brought a book of pics that he took in the Gulf and flipping through the pics and seeing what the sky looked like after the Iraqi's fired the Kuwaiti oil wells, brought back memories of the dark skies and that you could barely see the sun.  After the war ended, we spend a couple of months waiting to return back to Germany and I found out that my brother was a couple of hours away from me and I finangled a humvee and drove like a banshee down MSR "Grape" I think it was.   Well I saw my brother and I spent an hour or so seeing him.  I was glad to see him and glad that he also made it.  Well apparently this did happen... 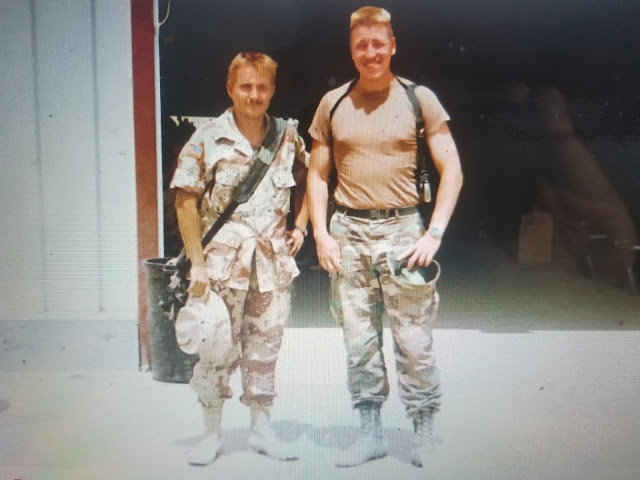 Some one did take a pic of me and my brother, I was shocked, I had thought for 27 years that I had missed an opportunity.   I do know that I pissed blood for several days after the visit because the tank trails were rough and the humvee had no padding, LOL, but it was worth it.   My brother sent me the pic as a PDF and I haven't figured out how to convert it to a Jpeg or something like that.


I decided to roll with Eagles "Already Gone".  There are a group of songs that I can listen to over and over again and this is one of those songs.  This is a good driving song....especially with the windows open and the music blaring.  the song reminds me of driving in the southland on a country road.   In my heart I am a country boy, I do not want to live in the city, I am not a city dweller...being trapped inside a city if things go "pear-shaped" definitely is not a comfortable feeling.  When ever I hear it, I think of driving near my kaserne "Cooke Barracks" in Germany south of Stuttgart.


"Already Gone" is a song recorded by the American rock band Eagles for their 1974 album On the Border. It was written by Jack Tempchin and Robb Strandlund and produced by Bill Szymczyk.
The song was the first single released from On the Border and peaked at #32 on the Billboard Hot 100. Since then, the Eagles have included it on their greatest hits albums and in their live performances. Tanya Tucker and Wilson Phillips have covered the song. 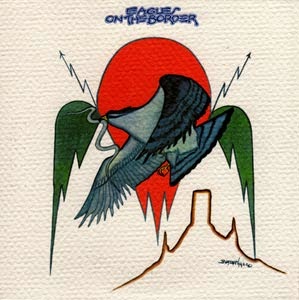 "Already Gone", which is four minutes and 13 seconds long, was written by Robb Strandlund and Jack Tempchin. In the liner notes for The Very Best Of, Glenn Frey said that Tempchin sent him a tape of the song through the mail. Tempchin had already written one of the Eagles' previous singles, "Peaceful Easy Feeling".
"Already Gone" was one of the first songs that the Eagles recorded after they moved to Los Angeles, and it was produced by Bill Szymczyk. Frey was the lead vocalist

I couldn't find any video's from back then.  Only stuff I saw was stuff from the 1990's and later and I didn't like that.

"Already Gone" is the opening track of the Eagles' album On the Border, which was released by Asylum Records on March 22, 1974. It was released as the first single from the album in April 1974. Its b-side was "Is It True".
The song has also been included on some of the Eagles' compilation albums, including Their Greatest Hits (1971–1975) and The Very Best Of

"Already Gone" has been described as a "classic". In his book To the Limit: The Untold Story of the Eagles, Marc Eliot wrote that the song "was an out-and-out rocker ... Musically it sounded like a fuel-injected rave-up, with melodic echoes of both 'Peaceful Easy Feeling' and 'Take It Easy.
Posted by MrGarabaldi at 11:30 PM

Email ThisBlogThis!Share to TwitterShare to FacebookShare to Pinterest
Labels: and other stuff, Monday Music