Man things are moving faster and faster, especially when it comes to helmets and body armor.    Back when the American Doughboys went to the "War to end all wars", they copied a British Helmet design because before this, the American Army didn't "do" body armor or helmets, but the casualties that the allies were racking up in France forced a change and the American Army got this... 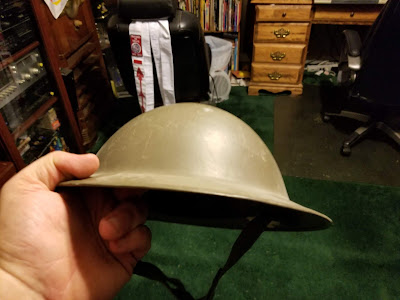 The M1917 Helmet or the "Kelly" nicknamed the "Tin Hat".  This is one of the helmets that I have in my collection.
This was the same kind of helmet that the Americans fought the early days of WWII with.  They didn't get all issued with the M1 Helmet.until the mid to late 1942.  The United States wanted to give their soldiers more protection than the older "Tin Hat. 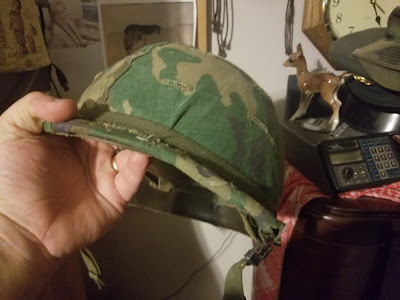 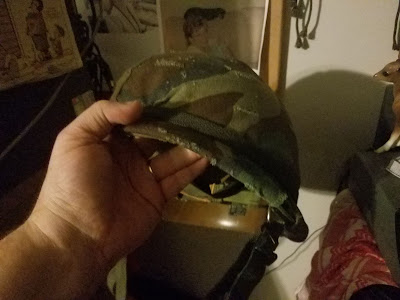 My 1980's Pattern M1 Helmet "Steel Pot"  The basic helmet has not changed since 1942 with the exception of the webbing and the cover.
The M1 stayed on from WWII through Vietnam and through  the mid 1980's before being changed to the PAGST.  We called the PAGST Helmet the "Fritz" helmet because the similarity between the German "Stahlhelm" of WWII fame and the American PAGST.  They later called it the "K-Pot" 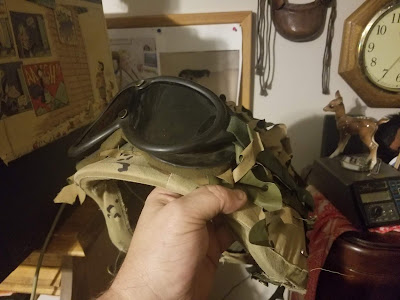 My PAGST helmet with the "ChocoChip" Cover.  I have blogged before about the helmets and you can read about them HERE

With the latest revelation from officials of the US Army in March 2019, US soldiers could well be on their way towards invincibility. A new set of body armor and new helmets have been finally completed after years of development
The new body armor is not only lighter than its predecessor but also provides better protection and allows better mobility for ground troops. The new helmet, besides being lighter, is also designed to provide double the protection of its predecessor against blunt force trauma.

This new Soldier Protection System (SPS), in short, will give soldiers the ability to take a serious beating, and walk out alive.
According to the manufacturers and Army officials, the newly completed SPS—which comprises the Integrated Head Protection System, Modular Scalable Vest, and Blast Pelvic Protector—is a critical upgrade from previous systems.
Upon release in March 2019, the first SPS units will be delivered to Fort Bragg in North Carolina, to be first used by the Army’s 3rd Brigade Combat Team, 82nd Airborne Division.

The revelation was made by Army officials on March 11 during an event at Fort Belvoir, Virginia. The event was a ceremony reuniting Staff Sergeant Steven McQueen with his battered helmet.
McQueen was in Afghanistan in September 2018 when two gunmen fired at him and his comrades from around 20 feet away. McQueen took a head shot from a machine gun, but quickly sprang to his feet and ran for cover.
The 3.3-lb helmet he had worn that day was presented in the ceremony with a large hole on it. The life-saving helmet was one of the Enhanced Combat Helmets (ECH) which is currently in use by soldiers of the US Army. McQueen revealed that prior to that event, he had felt that the helmet was too heavy and that its design was overkill.

Even so, the ECH has proven itself quite effective—but with the release of the Integrated Head Protection System (IHPS), developed by Ceradyne Inc., the Army is set to go a step higher. The newly finished, slightly larger IHPS has the same level of ballistic protection against rifles as the ECH, but offers 100% improvement in protection against trauma to a soldier’s head.
According to Alex DeGroot, Ceradyne’s lead engineer for head protection, with its improved protection and lesser weight the IHPS represents less force on the brain, and this is “one of the things that make the helmet considerably better than the current helmet.”
The IHPS also features a boltless retention system which allows the four bolt holes that used to hold the chin straps to be eliminated. According to Lieutenant Colonel Ginger Whitehead, the product manager for Soldier Protection Equipment, drilling holes on helmets has a downside: it weakens the material. The chin straps are attached to the sides of the helmets now, without bolts.


On each side of the IHPS, there are removable rails which would allow soldiers to mount lights and other necessary accessories on the helmet, especially when working under low-light conditions.
In a statement by DeGroot, the new helmet, with its slightly larger area, provides more space on both sides for soldiers to put on headsets more comfortably. The IHPS also comes with optional protective add-ons like a visor, a mandible guard for the lower jaw, and a “ballistic appliqué.”
The new body armor, the Modular Scalable Vest (MSV), weighs around 11 pounds without ballistic plates, and 25 pounds when fitted with front and side armor plates. Overall, it is lighter by five pounds than the Improved Outer Tactical Vest which is currently in use in the Army.

Another item in the SPS, the Blast Pelvic Protector, reportedly provides extra protection for the groin and upper thighs.
In a report released on Military.com, the SPS was said to also feature a Ballistic Combat Shirt (BCS) which has soft armor on the high back, high chest, shoulders, and neck to help protect against 9mm rounds and shrapnel.
The BCS is to replace the Deltoid Axillary Protector, which was originally developed in the early days of the Iraq War to shield US soldiers’ shoulders and upper arms from shrapnel wounds caused by Improvised Explosive Devices.


Because the Army has not yet been provided with all the sizes required for full fielding, the 3rd Brigade Combat Team of the 82nd Airborne Division will receive the IHPS and MSV but will not sport the BCS this month. However, according to Whitehead, there are plans in place to field the BCS this summer.
Perhaps it is impossible to achieve the perfect protection system. But with the constant improvements on existing models, and the desire to go even further, the United States military looks poised to take a shot at achieving invincibility, even if that is only slightly possible.
Posted by MrGarabaldi at 7:36 PM