The Myths and reality of the Montana Class Battleships..

I have been binge watching "Space Battleship Yamato 2199", it is basically an updated "Space Cruiser Yamato" of the 1970's fame, the graphics are much better and the storyline is different.  So it is interesting. 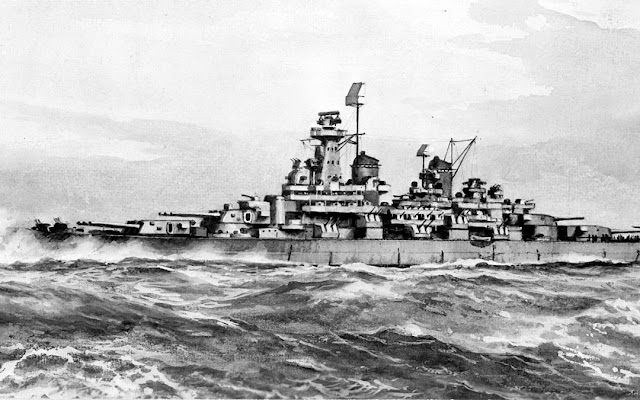 I shamelessly clipped this from the "Navy General Board"

A stretched Iowa with an extra turret. A ship designed to kill the Yamato class. Many myths surround the Montana class, the immensely powerful super battleships of the United States Navy. Designed to be larger and more powerful than any previous dreadnought, these ships would have been the most powerful dreadnoughts of their time. However, the ships were never built. This has led to many speculations about the ships. In this Navy General Board article, we breakdown some of the more common myths and set the record straight!

One of the common misconceptions about the Montana class battleships is that they were to ignore the Panama canal restrictions. This is only partially true. In realty the US was planning on expanding the Panama Canal locks to 140ft. Construction was meant to be completed around the same time that the Montana ships would come into service. The ability to quickly send ships through the Panama Canal was an advantage that the US was unwilling to part with. The fact that the canal locks were going to be enlarged was likely a big reason why the US Navy finally designed the Montana class.
While the Montana might have ignored the Panama Canal restrictions, they were bound by another equally important size requirement.
A little known fact is that the US Navy placed almost as much importance on being able to travel underneath the Brooklyn bridge as they did the Panama Canal. The height of the bridge at low tide was an important design consideration for ship design. This was because the New York Naval yard was one of the largest naval bases at the time. It was also one of the largest naval repair facilities available. The Navy needed all ships to be able to travel to that yard and the Brooklyn bridge was the largest obstacle blocking the way to the yard. 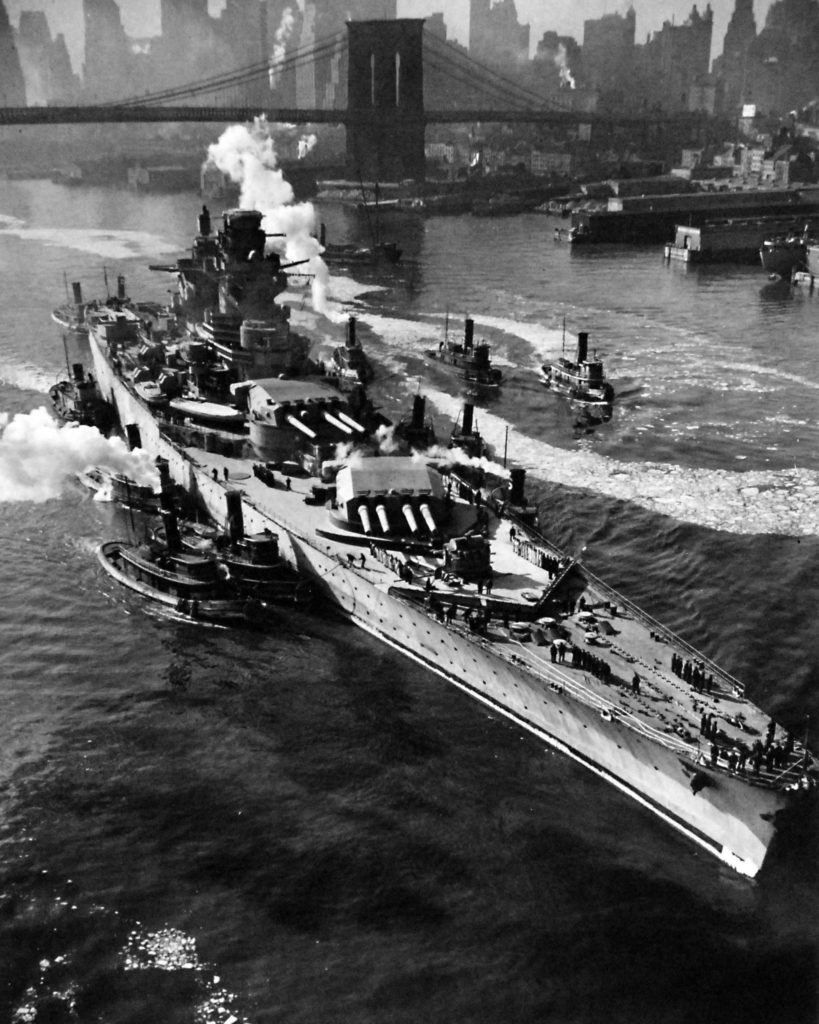 The Battleship Richelieu arrives in New York for Repairs. Note that the top of the fire control tower has been removed so that it can pass under the Brooklyn bridge. All US Battleships were designed in such a way that they could easily pass under this bridge. The Montana class would not have been any different.

Myth #2: The Montana was Designed to Counter the Yamato 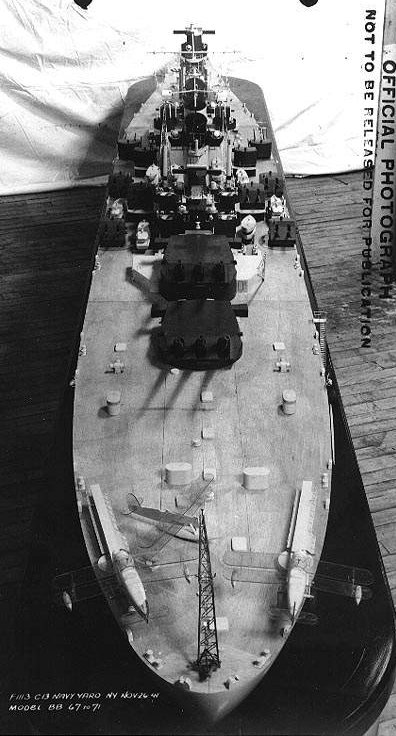 A model of the Montana class super battleships. Though similar in appearance to the Iowa class, several important differences separated the two classes.

It would be a long time before the US had a grasp of the Yamato’s capabilities. When design started in 1938, the Yamato was believed to be a battleship of typical size and armament. In 1936, a US received reports that Japan was building ships up to 55,000 tons.
A few years later in 1938, reports stated that Japan was building two 16″ heavy battleships with two more on the way. Over the course of the war, new evidence slowly allowed the navy to better understand what it was that it was up against. By 1944, interviews with captured Japanese personnel revealed that the Yamato class carried 18″ guns. Finally, It wasn’t until late 1944/1945 that the US navy finally had a grasp of the accurate specifications of the Yamato class.
Since the design of the Montana class began in 1939, this proves without a doubt that the Montana class wasn’t designed to counter the Yamato.
So if the Montana wasn’t designed to counter the Yamato, why was it so large? It is largely because the ship was designed to withstand the firepower of its own guns. The 16″/50 cannon when coupled with the “super heavy” 2700lb shell could have been the finest battleship gun ever to see service. At long ranges, its penetration power was almost that of the larger Japanese18.1″ shell. Due to this similarity, the fact that the Montana was so well protected against the Yamato’s mighty 18.1″ guns was really a happy/lucky accident.
The other contributing factor was that the US wanted a battleship more powerful than anything its adversaries was likely to use. A ship more powerful than the vessels preceding it, the Bismarck class of Germany, the Nagato class of Japan, and so on. An almost impractically large ship to dominate all others. In some ways the US didn’t believe anyone else would construct such a large ship. Unknown to the US, Japan had the exact same thoughts when designing the Yamato. The Montana class and the Yamato class were the premier super battleships of their respective navies.


Myth #3: The Montana was basically a larger Iowa Class Battleship

Probably one of the most common myths found across various forms of media today. Perhaps its because of the visual similarity of the two classes. Perhaps it is due to the similar choice in armament at first glance. Many claim that the Montana class was simply a larger Iowa class battleship with an extra turret added.

The belief in the connection between the Iowa and Montana classes likely stems from their similar appearance and use of the same main armament. However, examination of their design features shows two very different ships for two different roles.

Armoring is the largest difference between the two classes. The Iowa class ships used an internal armored belt inherited from the proceeding South Dakota class. This brought the armored belt inside the hull and was done as a weight saving measure, helping the ships achieve their famous speed. However, shells striking this belt first penetrated the outer hull. This had the unwelcome effect of potentially flooding the void space between hull and belt for shots that hit at or below the waterline. The Montana design didn’t have to follow weight restrictions and so reverted back to a traditional external belt where the armor was on the outside of the hull. This ensured that potential damage was outside of the hull and that watertight integrity would remain intact. Perhaps the most important difference is, unlike the Iowa class, the Montana was protected from its own guns. This armoring style reflects the design philosophies behind the two ships. The Iowa was meant to be a fast interceptor to guard against cruisers and fast battleships. The Montana class was designed to participate with the main battle line and engage in furious gunnery duels with multiple battleships.

After armor, speed shows another sizable difference between the classes. The Iowas were designed to be high speed 32 knot battleships to act as protection to the carrier fleet. While designers considered making the Montana class faster, they decided that firepower and armor were more important for the design. Thus, the Montana was limited to a speed of 28 knots like the 27 knot North Carolina and South Dakota classes. The Montana class were not fast enough to keep pace with carriers at their highest speeds, but more than fast enough to operate with other battleships making up the United States battle line.
Overall, the Montana was a vastly different warship compared to the Iowa class. The design reflects the role that they were intended for, a heavily armed and armored warship capable of taking on anything else that it might encounter. 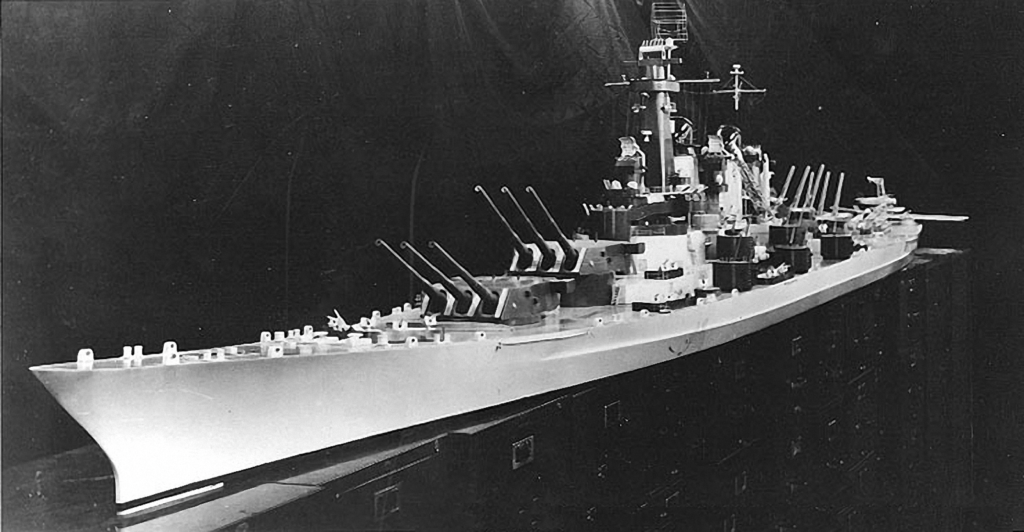 The Montana class battleships would have been one of the most powerful dreadnaughts ever to be launched, rivaled only by the Yamato class battleships. However, like the Yamato, the tiger tank, or many other of the “wonder weapons” created during the Second World War, a certain aura of myth has been built around them. They weren’t ultimate weapons conjured up to single handedly win the war, just simple units designed to fill a role particular role in warfare. Unfortunately for the Montana class, the role of the battleship in warfare was in its twilight phase. They were to be built right when the battleship was no longer the glorious warship it once was. The result was that the greatest battleship ever was never laid down.
Posted by MrGarabaldi at 6:00 AM