I have blogged before about Helmets and "Lucky Talismans" and helmets in general.  I remembered when I first got my helmet at my first dury station in Germany I immediately stuck my "LPS" bottle in the band around the helmet like I remembered seeing all the GI's doing during Vietnam. 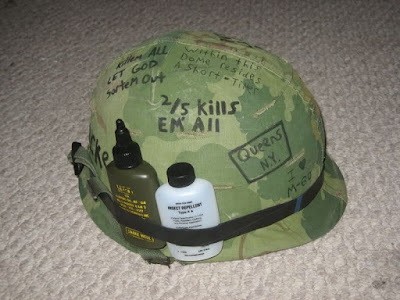 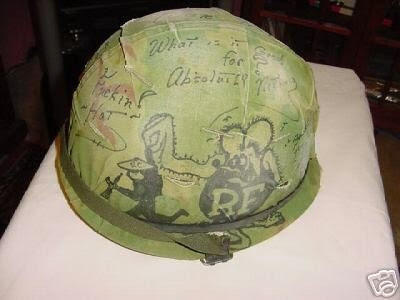 The Vietnam War tested the United States in new and horrid ways. Unprepared for guerilla tactics, dense jungles, and unwilling to interpret their foes’ actions as anything other than the working of Moscow’s efforts to expand Communism, the nation spent years in a conflict with no seeming end in sight.


Conscripted troops were constantly cycled through the war to prepare a generation for World War III, while politicians and commanders continually failed to understand the lessons learned in America’s previous guerilla campaigns. 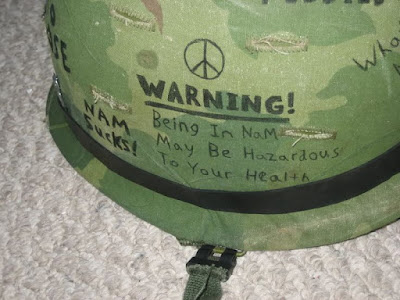 For the troops on the ground, Vietnam was a humid hell filled with enemies and a people barely considered human. Part of any soldier’s equipment at the time included a helmet, called a steel pot by the troops and officially known as the M-1 helmet.


The soldiers of Vietnam, being products of a time when the nation’s youth struggled to assert their individuality, started doodling on their helmets to express themselves. 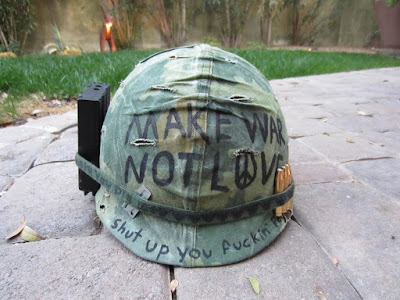 Such antics were not new, as handfuls of soldiers did something similar during World War II. During Vietnam their work grew more prominent and noticeable. It also garnered more attention as outrage against the conflict, both among the troops and at home, increased.


Such artwork drew media attention as early as June 18, 1965. Appearing in an Associated Press article by Pulitzer Prize-winning photographer Horst Faas, the photo caption noted Larry Wayne Chaffin of the 173rd Airborne Brigade, sporting a simple line across the bridge of his helmet: “WAR IS HELL.”

Email ThisBlogThis!Share to TwitterShare to FacebookShare to Pinterest
Labels: Helmets