This post is scheduled for Sunday afternoon on the Scheduler thingie.  I will not have a Monday Music like I normally do.  To me it would be inappropriate because it is Memorial Day. 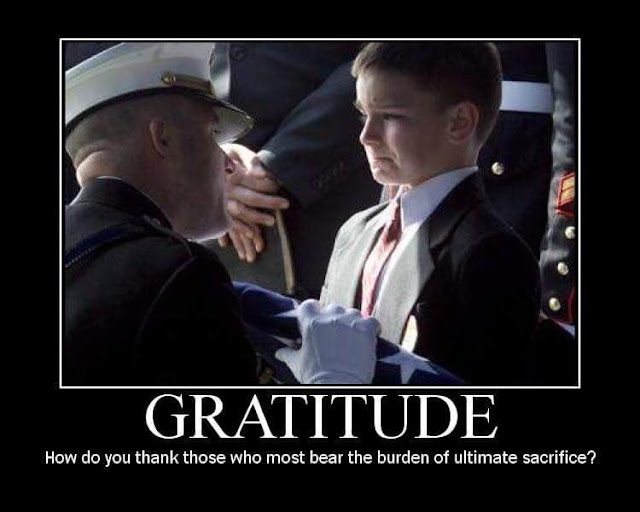 I'm going to explain "Memorial day" compared to the other holidays that involve the Military.

Armed Forces Day honors those that are serving now.
Veterans Day honors those of us that are no longer serving but still around to thank us for our    service.
Memorial Day honors those of us that died in service to our country or those of us that have died since.
To me Memorial day is a somber Holiday,  It gets worse the older I get because I attribute it to "survivors guilt".  We miss our comrades that will never grow old and one day we will join them.  Like I said, I attribute this to "survivors guilt" or basically why me and not them, why do I grow older and they don't.  What made me special that I lived and they didn't.  This goes through my mind and I just leave it to the guy upstairs because I figure that he still has plans for me.
I do what is called "Honor Guard" missions with my employer, where we greet all remains coming off the airplane with a flag line and a prayer.  I am honored to do that.  We had 4 of those missions last Wednesday and it made for a long day in the heat.  I didn't mind the heat because of what we were doing.
I don't begrudge the people using the Memorial Day as an excuse for a vacation or the "Start of Summer".  At least they say the words "Memorial Day" in their conversations.

There is a phrase I saw in the Movie "Gardens of Stone" that came out in 1987, and we started using it because it resonated with us. Here is  the trailer of the movie "Gardens of Stone".  I really like the movie partly it ties in with my Dads experiences because he was a member of the "Old Guard", although for him it was 1963-1964 for him.  He had told me that the things that the "Old Guard" did was accurately portrayed.

I hoist a glass of whatever beverage I drink on Memorial Day and say "Here's to us ...and those like us.....Damm few of us left."   I honor my friends that got killed during war and my friends that died after war from accidents, disease or suicide.