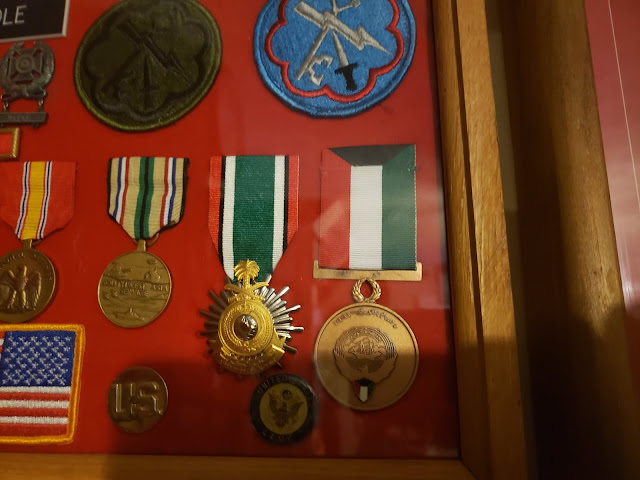 Today 29 years ago, Desert Shield became Desert Storm.  On 17th January Apache's snuck across the berm and wasted several Iraqi EW radar sites and opened the corridor for the masses of airplanes to strike targets all over Iraq.  The Navy fired Tomahawk Missiles from the Persian Gulf at the same time, this was the shock and awe of Desert Storm,  We had the entire Armed forces operating in concert.  I remember we felt like it was a "great Crusade" to liberate Kuwait.  We were in full MOPP4 and geared up in case the Iraqi's counterattacked.  Saddam Hussein had promised the "Mother of all Battles" and we went in fully expecting a lot of casualties.

Soldiers, sailors, airmen and marines of the United States Central Command:
This morning at 0300 we launched Operation Desert Storm, an offensive campaign that will enforce the United Nations resolutions that Iraq must cease its rape and pillage of its weaker neighbor and withdraw its forces from Kuwait. The President, the Congress, the American people and indeed the world stand united in their support for your actions.
You are a member of the most powerful force our country, in coalition with our allies, has ever assembled in a single theater to face such an aggressor. You have trained hard for this battle and you are ready. During my visits with you, I have seen in your eyes a fire of determination to get this job done quickly so that we may all return to the shores of our great nation. My confidence in you is total. Our cause is just! Now you must be the thunder and lightning of Desert Storm. May God be with you, your loved ones at home, and our country. 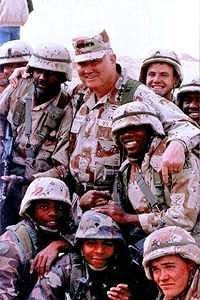 He had some detractors but we soldiers knew that he had our best interest in heart and we were fiercely loyal to him.  He was one of the officers that learned the lessons of Vietnam and vowed not to repeat them.  We were told that there was a "duration" policy, no rotation back to the world, there would be no "FNG" syndrome or any screwy Rules of engagement or the "Squad Leader in the Sky Syndrome" that was prevalent during the Vietnam War.
Posted by MrGarabaldi at 4:51 PM