I have been busy the past few days...shooting.  First off,  I took a total new shooter to the local range near where my wife works.  The shooter is a friend of mine and my wife.  I honestly believe that all ladies should know how to shoot.  She bought a .38 special revolver 8 years ago, but has never taken it out of the box.  I mentioned in passing that I teach people how to shoot and she was really excited about learning how to shoot and I was very happy to teach her. 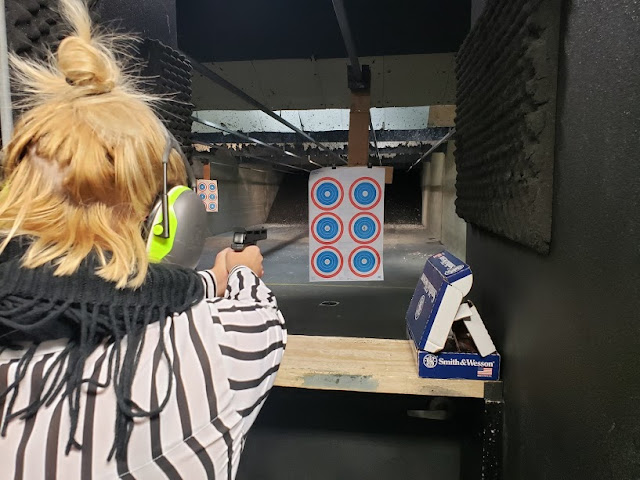 We started off with the .22LR pistol, with the reduced noise and recoil, it is perfect for teaching where people can practice the fundamentals without worrying about the noise and recoil.  The range we used was "dingy" and very noisy, not a good place to show someone how to shoot.  I had wanted to take her to my friend Macks place of business but he was out of town.  Mack works at a much nicer facility than where we shot. 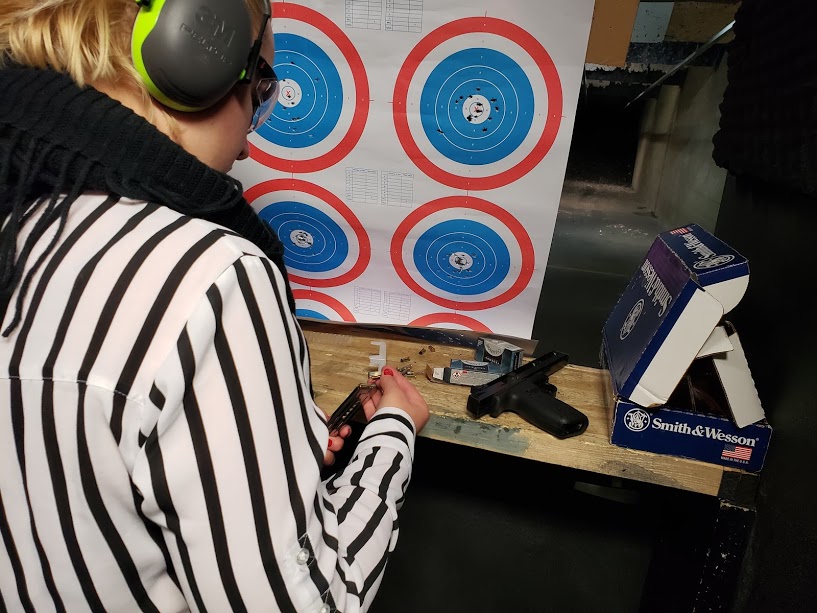 Here she is loading magazines.
I started her at 2 feet away, then 4, then 8 feet up to the 21 foot mark.  I explained the significance of the 21 foot rule, the "Tueller Drill".  the stripe on the floor reinforced this.  You can tell from the targets that she did really well, especially for a first time shooter with the guy 2 bays down shooting some hand cannon from the "boom"s  we were getting. 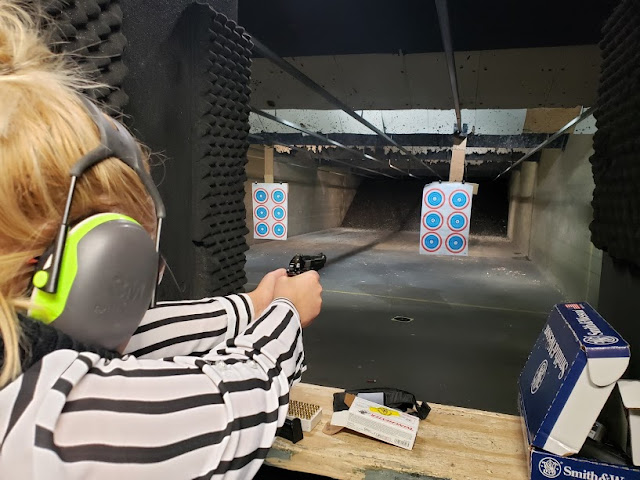 I then moved her up to the .32 ACP Model 81 Beretta.  I was working her up to the .38 Special like what she  will be shooting and what she owns.   The Beretta shot flawlessly as normal and she did well with the larger pistol. 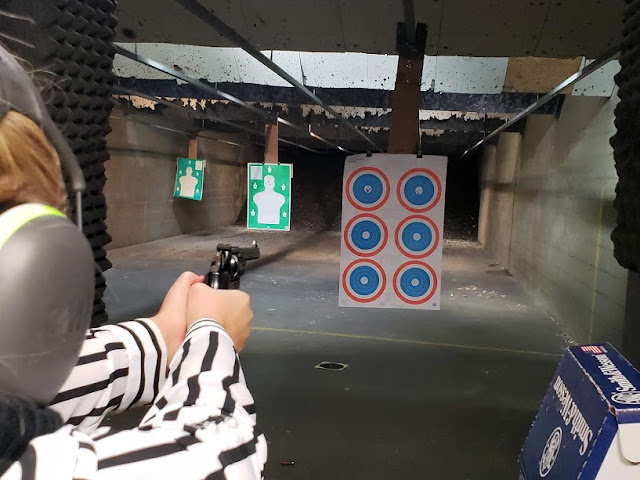 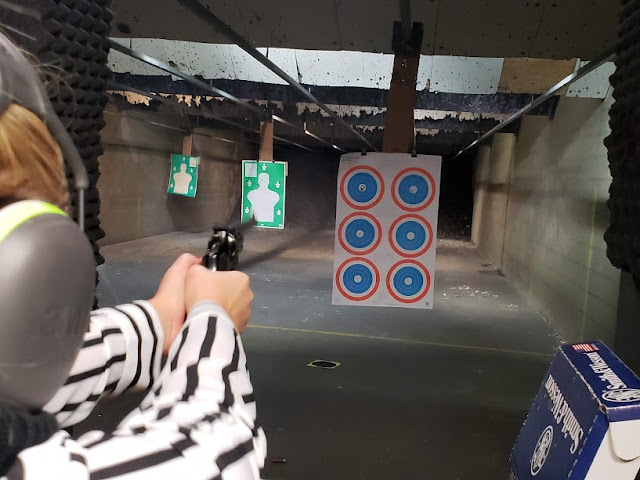 She shoots extremely well especially for a new shooter.  She was really excited when I told her that we will go to shoot rifles, especially the EBR's that is a very popular with the shooting community next month.    Per Macks recommendation, I got her some Hornandy Critical Defense 110 Grn FTX, perfect for short barrel revolvers, hers will be coming up from her folk's house and she will have the proper ammo for it.  I was happy to show her how to shoot, the Lady is a class act and a pleasure to deal with. 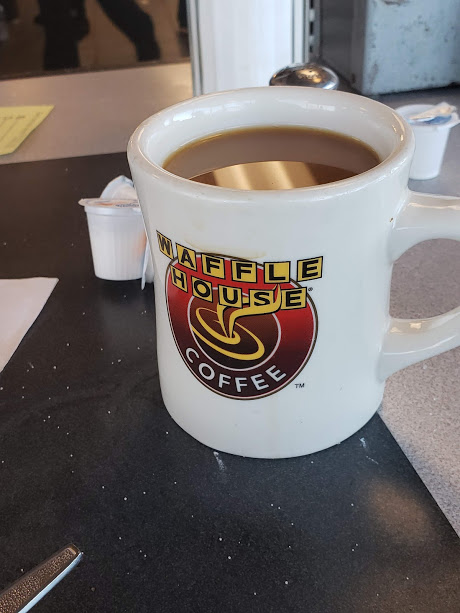 I had volunteered to run a shooting event  the next day at our local Boy Scout base, Of course I stopped at the local Kraznovian Embassy for breakfast and coffee as is tradition.  I got to camp and got things set up for the shooting.  I was instructing and running the .22LR range. 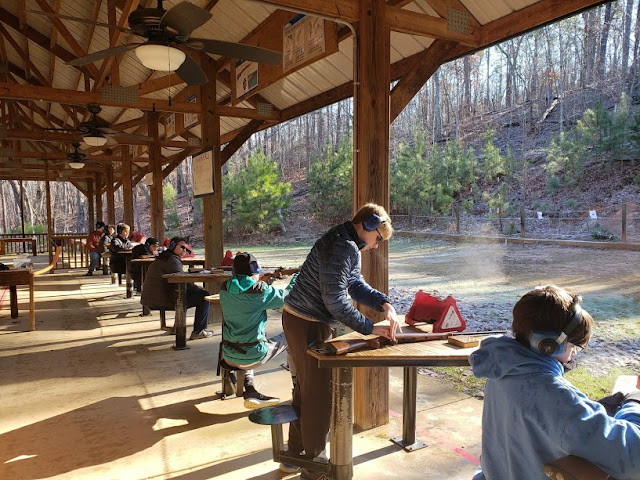 it was foggy at first and a bit cold, but the sun was successful in burning the fog away.  The kids are having a good time, I have a reputation for running "fun" ranges for the kids.  They shoot better if they are relaxed. 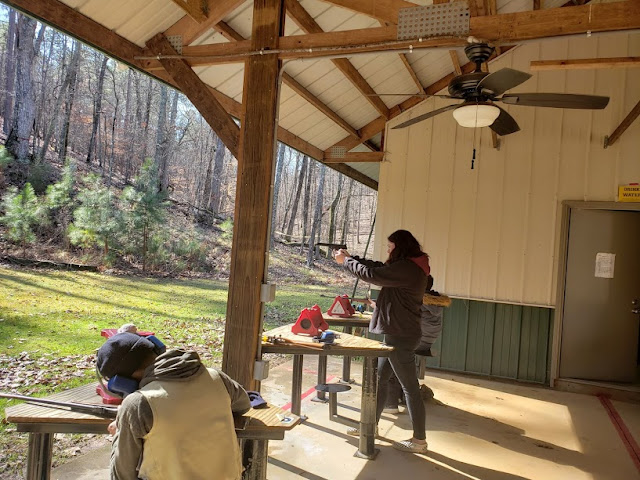 I had an 18 year old girl there, she is a member of a ""Venture Crew"  She was killing the target with the rifle, and with her Dads permission I quickly instructed her in pistols.  In the Venture crews, they are allowed to handle pistols as one of their activities.  She didn't do as well as my friend did the day before but she enjoyed the experience because she has never fired a pistol before.
Well Lunch came and rather then eat, the kids had gone back to their campsites, so I set up my rifle.  I used the .22LR adapter for my rifle. 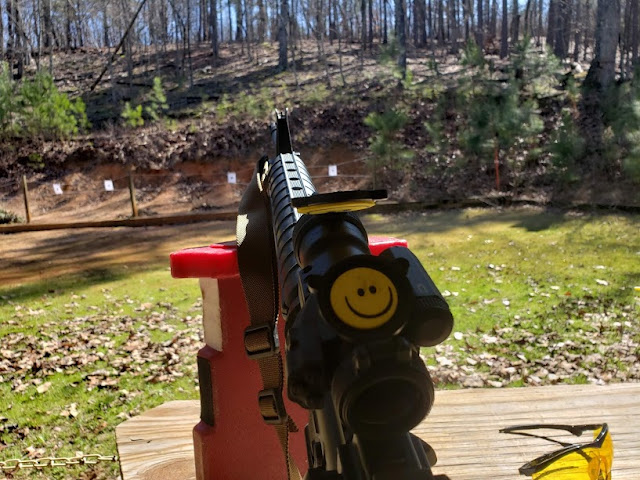 I relaxed and started shooting, I didn't have my glasses with me, so I was just shooting with "safety glasses, 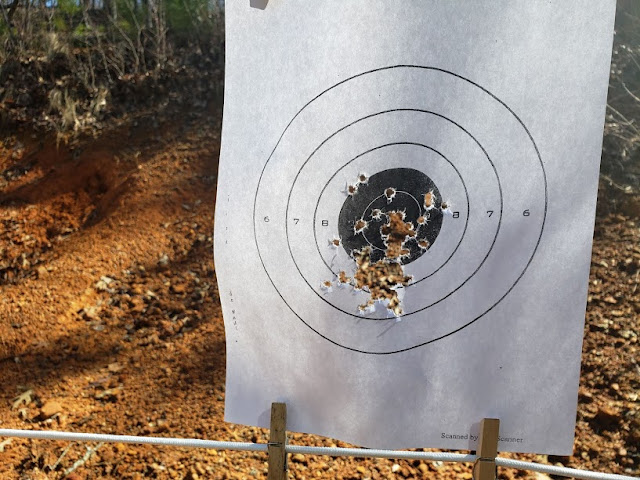 I didn't do half bad, it does help using a red/green dot rather than iron sights.  Although my rifle has backup iron sights on it.
I realized the time and quickly put my rifle back in "normal" configuration and put it in my truck before the kids and parents showed up after Lunch.
We continued shooting and I wound up signing off 7 kids for the shooting target requirements of their "rifle" merit badge.  I do stuff like this on a regular basis.  If the scout has the fundamentals , I will sign off the target.  Especially when they put 50 rounds through it and everything is "tight"  There was one kid that never fired a rifle before, not even a "BB" gun and he qualified right out of the gate, pure natural, told his scoutmaster what was going on and he told he that he knew the scout since he was a "Tiger" in the cub scouts and that he is a good kid.  I commented "That kid is a natural, he does like that and gets better, he might represents us in the Olympics one day."  the scout master appreciated the praise. 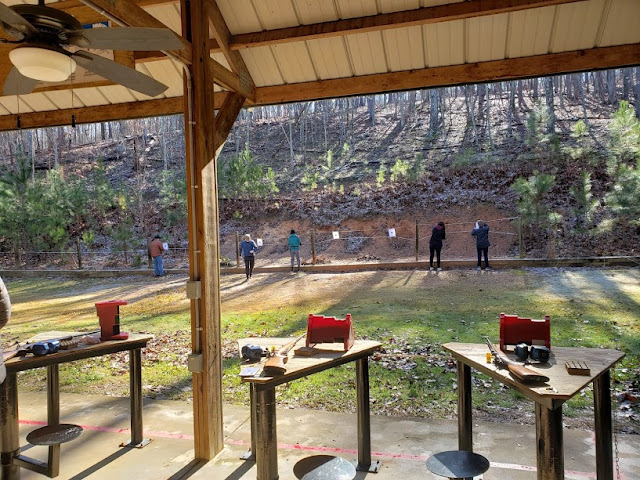 It was a great day to go shooting, the wind was minimal and I had a good group of scouts, no drama and everything went smoothly.
While I was shooting my rifle, I kept seeing this.. 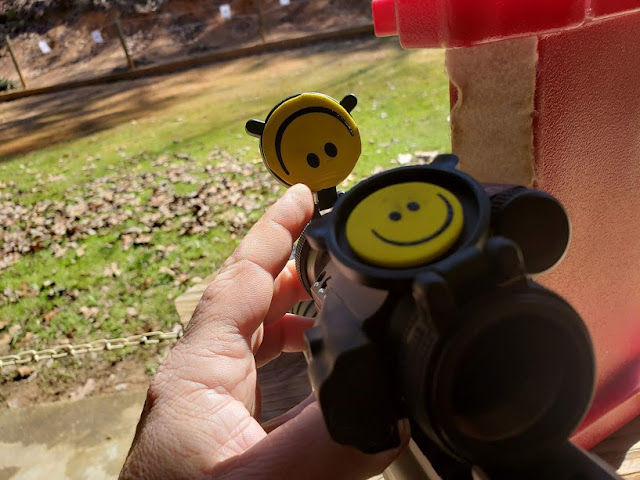 And the song came in my head from the early 80's "Key Largo" and the lyric was "Here's looking at you kid" was playing through my mind.  And of course the "Happy Faces" are part of my warped personality.


Back Home and Cleaning up 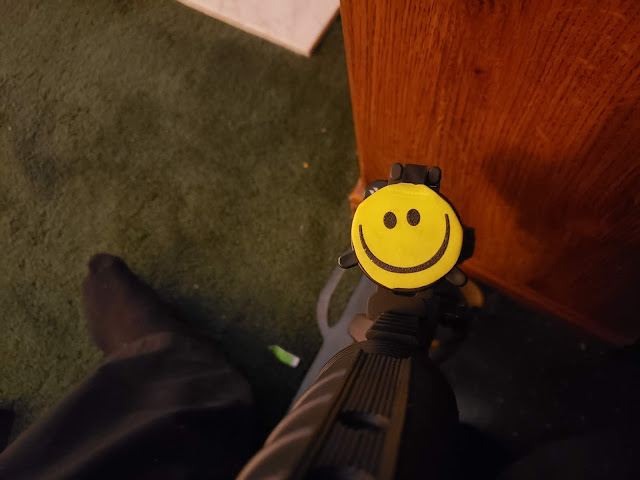 Big Smiley is back in the Gun safe all clean
Posted by MrGarabaldi at 7:26 PM