Some Reasons to consider the M-14/M1A

I am continuing my articles on the M-14 pattern Rifle(Down Jim), LOL.  Again I shamelessly clipped this from "American Rifleman", this article showed up in my email feed last week and I thought it was pretty good. 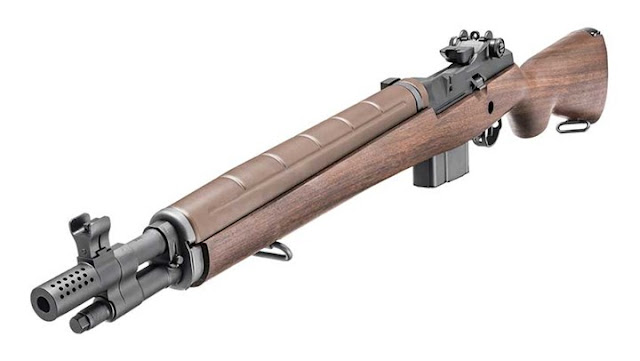 The internet is rife with essays by self-styled firearm experts who seem hell-bent on disparaging various legacy platforms for all manner of supposed deficiencies—despite the fact that those same guns are held in high regard by large numbers of satisfied users. Such differences of opinion are understandable given the fact that each of us has a uniquely individual set of experiences, knowledge and preferences that informs our choices.
One platform that seems to be a magnet for criticism is the M14 rifle. In fact, some call it out as an ideal example of failure with explanations such as: “It’s too heavy and too long. It was the shortest-lived service rifle in U.S. history and was only adopted because the process was corrupt. It was unsuccessful in singlehandedly replacing the M1 Garand, M1903 Springfield, M1917 Enfield, M1 Carbine, M3 submachine gun, M1928/M1 Thompson, and M1918 Browning automatic rifle.”

Of those claims, the first is purely subjective, the last represents an unrealistic goal and those that follow are arguable, considering that the rifle still sees some military service today and that the parties involved in its adoption are no longer with us. More to the point, none of the complaints are relevant to a discussion of the merits available to the average rifleman by modern-day, semi-automatic M14 clones.

Examples from such companies as Springfield Armory (whose corporate cornerstone is the trademarked M1A) LRB Arms, Bula Defense and James River Armory remain not only commercially viable, but are available in a wide variety of configurations, including polymer- and folding-stock and short-barrel models. And since most command the better part of two grand in price, that should answer any questions as to the value they hold in the minds of modern consumers.
At the risk of appearing to indulge in the same brand of myopic self-rationalization as the aforementioned “experts,” I’d like to suggest that the old warhorse is not only still worthy of consideration by today’s armed citizen, but is uniquely qualified as one of the best general-purpose rifle choices for uncertain times. Why? Because of six characteristics that lend it an undeniably attractive character.
Military Pedigree

Civilian firearms derived from military designs offer their users several advantages over those developed solely for the commercial market, and the M14-style rifle is no exception. Such designs are typically overbuilt as they are intended to suffer the exigencies of wartime abuse and neglect. They typically consist of separable subassemblies that ease cleaning and inspection and decrease parts loss.

Spare parts left over from military contracts eventually find their way into the civilian marketplace, which virtually ensures the user’s ability to keep the firearm in working order indefinitely. Provisions for the attachment of accessories such as optics, muzzle devices, bayonets, etc., and the on-board storage of cleaning equipment is another advantage. Finally, military firearms like the M14, because they are employed by wide-ranging user group, usually exhibit well-developed mechanical and ergonomic features.
Rugged Construction

The original M14 rifle was nearly devoid of polymers and nonferrous “light” metals or construction methods designed to shave a few ounces or favor inexpensive manufacture. Its parts are nearly all made from machined steel forgings—a process renown for longevity and durability. Its steel barrel threads into the receiver, which also provides the locking recesses for the two-lug steel bolt. The gun is basically a gas-operated bolt-action with a strong, simple mechanism that can withstand tens of thousands, if not a couple of hundred thousand, rounds of firing.

In fact, the improved drawings used to machine the receivers of today’s semi-automatic clones, whether from precision investment castings or forgings, along with improvements in metallurgy and quality control of bolts, barrels, gas cylinders and other parts, makes the current crop of civilian rifles even more reliable and refined, in some respects, than those the military had made by the U.S. Springfield Armory, Harrington & Richardson, TRW and Winchester.
Reliable Operation

Being an offshoot of the M1 Garand, and with aspects of its design perfected by none other than John C. Garand himself, the M14’s basic operating system had already proven itself throughout multiple theaters of World War II and in the Korean War before undergoing a baptism by fire in the Vietnam War. In fact, the gun’s detachable box magazine and piston-driven, gas cutoff mechanism were further refinements of the Garand’s more rudimentary en bloc clip and dog-legged, one-piece piston/operating rod.

Standing in distinct opposition to unsubstantiated claims about how the Garand-derivative family of arms is overly susceptible to the ingress of debris are reams of testimonials from G.I.s across a generation that praise the rifle’s performance across dramatically distinct climatic and terrain conditions. Given responsible care and lubrication and fed proper ammunition, today’s M14-style rifles, which include Ruger’s Mini-14 series, can be counted on work exactly as designed for many years.
Simple Ergonomics
Oftentimes, those who have intimate familiarity with one particular firearm platform, either through personal preference or professional service, have difficulty accepting another—and that’s understandable. But when one particular style of firearm or operating mechanism and one arrangement of controls becomes so sacrosanct that all others are deemed wrong, that becomes legalism, and such is the case with AR-style controls. The M14, by contrast, has quite usable controls in a slim, ergonomic platform. The M14-style rifle has a reciprocating charging handle on the right (ejection) side that’s simply an extension of its operating rod. It allows for positive chambering by a nudge of the heel of the hand.

In a compact package, the M14-style rifle offers numerous benefits in terms of ergonomics and handling, as exemplified by this Springfield Armory SOCOM16.

Several aspects of the M14’s design make it stand out from the crowd. Its ingenious White expansion and cutoff gas system—with a separate piston that moves rearward to strike the operating rod—minimizes damage with a variety of bullet types and weights used in it. In addition, a valve on the gas cylinder allows the gas system to be manually turned off, resulting in what is essentially a straight-pull rifle that can be cycled faster than a traditional bolt-action, since all that’s required is to withdraw the operating rod handle to the rear and then simply release it, allowing the recoil spring to return the bolt into battery.

Also, the rifle has a feature that most newer guns, even military designs, no longer possess: a built-in guide that allows the magazine to be fed using stripper clips. Such clips present an efficient and lightweight option for carrying additional ammunition. Additionally, the attachment of either conventional or forward-positioned optics using a wide variety of bolt-on mounts is easy. Finally, few could successfully argue against the M14-style rifle’s excellent sights and trigger, both of which contribute to a level of accuracy that well serves most hunting and defensive roles.

Rifles made of wood and steel have served remarkably well in both civilian and military circles for about seven centuries. Sure, for about as many decades, polymer and nonferrous metals have proven to offer some advantages—but primarily in weight savings, not longevity. So, when it comes down to it, there’s simply nothing fundamentally wrong with a traditionally styled rifle made of wood and steel.

In fact, the appearance of such a gun could be an advantage during circumstances in which a more modern, tactical design might draw unwanted attention. With a flush-fit magazine and a shortened muzzle compensator, such as in Springfield’s recently released M1A, the Tanker, the M14-style rifle has a form factor that is significantly more svelte than the average modern sporting rifle, despite its greater weight.
For all of the above reasons and more, the M14-style rifle offers a level of utility and capability—all in an understated package—not commonly encountered in many more modern firearms. Is it the “perfect” rifle? By no means, but it is surely underestimated and underappreciated when objectively evaluated.

The M14 platform continued to see active military service well into the 21st century, albeit in a modernized Mk 14 EBR configuration. Photo courtesy of PEO Soldier.
Posted by MrGarabaldi at 5:30 AM