I figured it would scar the alphabet boys if they come busting in and hearing a song about people standing for their beliefs and willing to fight for them no matter the cost, Good Music  unlike that crap they listen to now.  What can I say, My humor is warped....just a bit. Next week will be "Run Like Hell" by Pink Floyd, This one was suggested by a reader " Jay Karamales"  Now that should really cause some psych evals., hehehe, some poor ATF guy trying to explain the attraction to his mother because he is imaging himself as The savior of the American way rather than working for an agency that have the initials of a convenience store.  I was thinking of this song would be good for one of the alphabet agencies knocking and we have the attitude of the people that hate the state in the movie "Hunger Games" because we ain't gonna answer that door.  They can kick it in and start "the Dance" 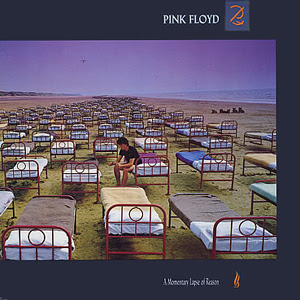 A Momentary Lapse of Reason is the thirteenth studio album by the English progressive rock band Pink Floyd, released in the UK on 7 September 1987 by EMI and the following day in the US on Columbia. It was recorded primarily on guitarist David Gilmour's converted houseboat, Astoria.

A Momentary Lapse of Reason was the first Pink Floyd album recorded without founding member Roger Waters, who departed in 1985. The production was marred by legal fights over the rights to the Pink Floyd name, which were not resolved until several months after release. It also saw the return of keyboardist and founding member Richard Wright, who had resigned from the band under pressure from Waters during the recording of The Wall (1979).

Unlike most earlier Pink Floyd records, A Momentary Lapse of Reason is not a concept album. It includes writing contributions from outside songwriters, following Gilmour's decision to include material once intended for his third solo album. The album was promoted with a successful world tour and with three singles: the double A-side "Learning to Fly" / "Terminal Frost", "On the Turning Away", and "One Slip".

A Momentary Lapse of Reason received mixed reviews; some critics praised the production and instrumentation but criticised Gilmour's writing, and it was derided by Waters. It reached number three in the UK and US, and outsold Pink Floyd's previous album The Final Cut (1983).

Only version I could find was the one with Spanish subtitles, I guess there were copywrite issues otherwise.

The video for the track composed of the backdrop film directed by Storm Thorgerson which depicted German Shepherds with yellow eyes running through a war zone plus a live recording and concert footage filmed during the band's three night run at The Omni in Atlanta, Georgia in November 1987 directed by Lawrence Jordan (who has directed concert films for Rush, Mariah Carey and Billy Joel). Videos for "On the Turning Away" and "One Slip" were also filmed from this concert where the video for "The Dogs of War" was filmed.