"The Best Quotes of Courage"

I shamelessly snagged this off "Arts of Manliness" 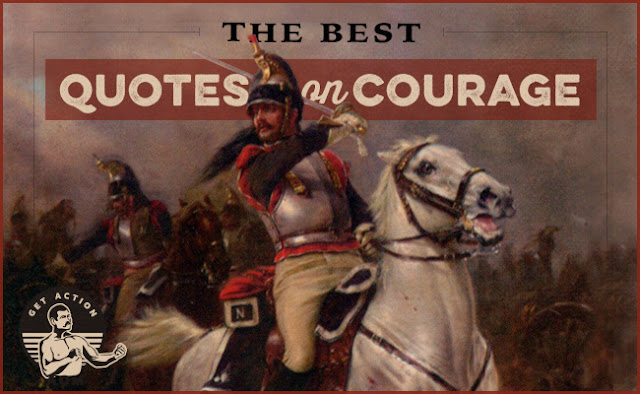 Have you ever wondered why it is that being called a coward is considered such a grave insult? It’s because courage is the lynchpin of character — that which makes possible every single one of its other dimensions; as Samuel Johnson once said (and Winston Churchill later paraphrased): “courage is reckoned the greatest of all virtues; because, unless a man has that virtue, he has no security for preserving any other.”

The exercise of any virtue requires the capacity to endure hardship, conquer fear and temptation, choose the riskier and more strenuous path when you’d rather take the easier way out — and this capacity is enabled by courage. Without courage, it’s impossible to be disciplined, honest, chaste, patient, self-reliant, compassionate, or resolute. Without courage, it’s impossible to be anything other than a non-entity.

While few of us are called to charge into battle these days, we all still need an ample arsenal of courage to stand up for those we love, defend unpopular beliefs, take professional and creative risks, and continue to choose the good, true, and honorable in a world where it can be hard to keep carrying the fire. And as Theodore Roosevelt observed, it is only by exercising courage in these smaller ways, that we’ll be able to summon it in more dramatic fashion should a true crisis arise.

If your heart could use strengthening, below we present 54 of the best quotes about courage ever spoken and set down. While we did our best to vet them, and successfully confirmed the accuracy and authorship of 90%+ of them, we drew many from old books from the 19th century, which didn’t include the quote’s original source, and used obscure translations of foreign/ancient texts that make the tracing of its origin difficult. But if the province of a few of the quotes is shadowy, the truth behind all of them is sound. Read them over, commit some to memory, write one down you particularly like and stick it to your bathroom mirror. And then go forth with greater fortitude to face life’s challenges.

Email ThisBlogThis!Share to TwitterShare to FacebookShare to Pinterest
Labels: Art of Manliness