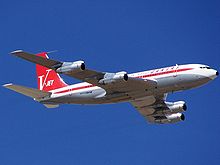 The real star of the show, the Boeing 707 (a 707-348C, serial no. 19351 [503rd 707 off the production line], originally registered N324F), was leased to MCA/Universal Pictures from Flying Tiger Line (now merged with Fedex) for the filming of the exterior shots. After filming was completed, the aircraft returned to Flying Tigers and was later sold, going through various owners before meeting a tragic end while on an approach to landing accident on 21 March 1989 in Sao Paulo, Brazil.

The 707-320 Intercontinental is a stretched version of the turbojet-powered 707-120, initially powered by JT4A-3 or JT4A-5 turbojets producing 15,800 lbf (70,000 N) each. The interior allowed for up to 189 passengers due to an 80-inch (2,000 mm) fuselage stretch (from 138 ft 10 in (42.32 m) to 145 ft 6 in), with extensions to both the tail and horizontal stabilizer extending the aircraft's length further.[23] while a longer wing carried more fuel, increasing range by 1,600 miles (2,600 km) and allowing the aircraft to operate as true transoceanic aircraft. The wing modifications included outboard and inboard inserts, as well as a kink in the trailing edge to add area inboard.[10] Takeoff weight was increased to 302,000 lb (137,000 kg) initially, and to 311,000 lb (141,000 kg) and perhaps further as higher-rated JT4A's became available. First flight was on January 11, 1958, and 69 turbojet 707-320s were produced. No -320 Intercontinental models were re-engined with fan engines in civil use, but around year 2000 the Israeli Air Force re-engined two ex-Sabena -320 based military tankers.
The 707-320B is a re-engined version undertaken in parallel with the -120B, using the same JT3D-3 turbofans and incorporating many of the same airframe upgrades as well. The wing was modified from the -320 by adding a second inboard kink, a dog-toothed leading edge, and triangular wingtips instead of the earlier blunt ones.[10] These new wingtips increased overall wingspan by three feet. Takeoff gross weight was increased to 335,000 lb (152,000 kg). The 175 707-320B aircraft produced were all new-build, no original -320 models were converted to fan engines in civilian use.
The 707-320B Advanced is a slightly improved version of the -320B aircraft, adding three-section leading-edge flaps. These reduced takeoff and landing speeds, and also altered the lift distribution of the wing, allowing the ventral fin found on earlier 707s to be removed. The same wing was also used on the 707-320C.
The 707-320C has a convertible passenger–freight configuration which became the most widely produced variant of the 707. The 707-320C added a strengthened floor and a new cargo door to the -320B model. 335 of these variants were built, including a small number with uprated JT3D-7 engines and a takeoff gross weight of 336,000 lb (152,000 kg). Despite the convertible option, a number of these were delivered as pure freighters. One of the final orders was by the Iranian Government for 14 707-3J9C aircraft capable of VIP transportation, communication, and in-flight refuelling tasks.
The 707-420 is a version of the 707-320 originally produced at specific request for BOAC and powered by Rolls-Royce Conway 508 turbofans, producing 17,500 lbf (77.8 kN) each. Although BOAC were first to order the 707-320 delays in getting British certification meant that Lufthansa were the first to receive and operate the 707-320 in February 1960. A total of 37 were built to this configuration.
The 707-700 was a test aircraft used to study the feasibility of using CFM International's CFM56 powerplants on a 707 airframe and possibly retrofitting them to existing aircraft. After a testing in 1979, N707QT, the last commercial 707 airframe, was refitted to 707-320C configuration and delivered to the Moroccan Air Force as a tanker aircraft. (This purchase was considered a "civilian" order and not a military one.) Boeing abandoned the program, since they felt it would be a threat to the Boeing 757 program. The information gathered in the test led to the eventual retrofitting program of CFM56 engines to the USAF C-135/KC-135R models, and some military versions of the 707 also used the CFM56. Ironically the Douglas DC-8 "Super 70" series by Cammacorp did develop commercially, extending the life of DC-8 airframes in a stricter noise regulatory environment, so there are today more DC-8s in commercial service than there are 707s.

From Wikipedia, the free encyclopedia
Jump to: navigation, search
Flying Tiger Line, also known as Flying Tigers, was the first scheduled cargo airline in the United States and a major military charter operator during the Cold War era for both cargo and personnel (the latter with leased aircraft). The company was started by Robert William Prescott. It was headquartered on the grounds of Los Angeles International Airport in Westchester, Los Angeles, California.[1]
The airline was named after the Flying Tigers fighter unit of World War II, officially the 1st American Volunteer Group. Ten former AVG pilots formed the Flying Tiger Line (originally called National Skyway Freight) after returning to the United States in 1945, using a small fleet of Budd Company C-93 Conestoga freighters purchased as war surplus from the United States Navy.[2] For the next four years, Flying Tiger Line carried air freight on contract.
Over the years, Flying Tigers carried a number of unique cargoes, including SeaWorld killer whales and the torch of the Statue of Liberty.

Old Logo
In 1949, the Civil Aeronautics Board awarded Flying Tiger Line the first commercial air cargo route in the U.S., a transcontinental route from Los Angeles and San Francisco, California to Boston, Massachusetts. Shortly afterward, the company began chartering passenger aircraft for group travel as well; its Lockheed Super Constellation, Douglas DC-4 and DC-6 fleet comprised the largest trans-Atlantic charter operation through the 1950s.
During the Korean War, Flying Tiger aircraft were chartered to transport troops and supplies from the United States to Asia; Flying Tigers later received a cargo route award to Japan, China, and Southeast Asia. The airline also played a major role in the construction of the Distant Early Warning Line, flying equipment to remote outposts in northern Canada and Alaska.

Flying Tiger Line Douglas C-54A Skymaster at Manchester Airport, England in May 1955
Flying Tiger Line adopted the Canadair CL-44 swing-tail aircraft in 1961, becoming one of the first carriers in the world to offer aerial pallet shipping service. In 1965, Flying Tiger Line began operating jet aircraft (the Boeing 707); in 1974, the airline took delivery of its first Boeing 747.
The Flying Tiger Line then put in orders for brand new B-747-200F freighters designated the B747-249F, which at the time were among the heaviest commercial airplanes flying, weighing in at 823,000 pounds. These aircraft had the powerful "Q" P&W JT9D engines and heavy landing gear and could simultaneously carry both 250,000 pounds of fuel and 250,000 pounds of cargo loaded through both the nose door and the side door at the same time. Aircraft loaders had earlier refused to work at the extreme 30 foot height necessary for putting freight on the upper deck, so the "supernumerary area" or "hump" was configured with 19 first class seats instead which were used to transport livestock handlers, charter agents and mechanics as well as dead-heading pilots and flight attendants. Tiger's Ad Hock Charter livestock flights provided airlift for exotic animals. Two examples were thoroughbred racehorses and show animals from Stansted, England to the Melbourne Cup, as well as breeding stock cattle (milk supply) to nations such as Japan and Thailand. Covert flights for DOD were not uncommon throughout the airline's history, since its roots were from Civil Air Transport (CAT), just as was its sister airline Air America (airline) which was owned by General Claire Lee Chennault commander of the Flying Tigers fighter squadron in Southeast Asia.
By the mid-1980s, Flying Tigers operated scheduled cargo service to six continents and served 58 countries. It surpassed Pan American World Airways in 1980 as the world's largest air cargo carrier after acquiring its rival cargo airline Seaboard World Airlines on 1 October 1980.
It also operated military contract services, most notably Douglas DC-8 routes between Travis Air Force Base, California and Japan in the 1970s, followed by weekly Boeing 747 passenger service between Clark Air Base, Philippines, and St. Louis, Missouri via Japan, Alaska, and Los Angeles during the 1980s. Tigers employed approximately 251 flight attendants and carried up to a record 594 passengers and crew on its MAC all coach passenger flights. Approximately 998 pilots worked for the airline based throughout the country. Large crew bases were primarily Los Angeles, New York and Lockborn, Ohio. Headquartered at LAX, Tigers was a large employer at the airport with its own engine shop and jet maintenance business.
Federal Express purchased Flying Tigers in December 1988. On August 7, 1989 Federal Express merged Flying Tigers into its operations.
Flying Tigers operated a recording company subsidiary, Happy Tiger Records, from 1969 to 1971.[3][4] Flying Tigers also made livestock carriers for airplanes. They often made animal carriers that were comparable in external size and shape to the standard AMJ container used in the FedEx flight operations.

Posted by MrGarabaldi at 2:12 PM

Email ThisBlogThis!Share to TwitterShare to FacebookShare to Pinterest
Labels: Airplanes