This falls into the category "YGTBSM".  lessee give money  we don't have to people that don't like us.  How much of that proposed millions will be used to load up Swiss bank accounts and send more explosives to terrorist organizations that are hostile to us and Israel.   This is almost as lame as "cash for clunkers" and the great Porkulus, slush fund for democrats, payoff for political cronies.  Stumulus 1.   I will be sending a snail mail letter to my congresscritters in both houses.  they may blow me off but it will be on paper, the old fashioned way.  it gets their attention more than phone calls or e-mail will.     Damm this is asinine and stupid, not to mention extremely naive.  The results of Arab Spring is a middle east that is more theologically islamic and less secular than before.  We have the muslim brotherhood and other groups making huge inroads in their electorial process.  We as a nation borrow .40 cents on the dollar and we want to give them 800 million of our hard earned tax dollars?   I am having a hard time grasping the thought processes of such a proposal.

this article was compliments of Reuters 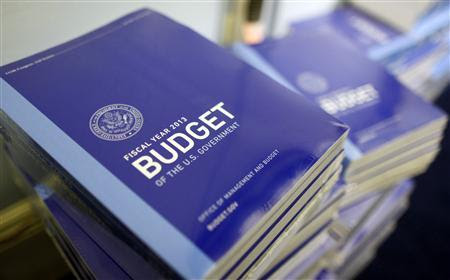 Copies of President Obama's Fiscal Year 2013 budget are seen stacked on the floor of the House Budget Committee room on Capitol Hill in Washington February 13, 2012.


By Susan Cornwell
WASHINGTON | Mon Feb 13, 2012 12:39pm EST
WASHINGTON (Reuters) - The White House announced plans on Monday to help "Arab Spring" countries swept by revolutions with more than $800 million in economic aid, while maintaining U.S. military aid to Egypt.In his annual budget message to Congress, President Barack Obama asked that military aid to Egypt be kept at the level of recent years -- $1.3 billion -- despite a crisis triggered by an Egyptian probe targeting American democracy activists.
The proposals are part of Obama's budget request for fiscal year 2013, which begins October 1. His requests need the approval of Congress, where some lawmakers want to cut overseas spending to address U.S. budget shortfalls and are particularly angry at Egypt.
Obama proposed $51.6 billion in funding for the U.S. State Department and foreign aid overall, when $8.2 billion in assistance to war zones is included. The "core budget" for the category would increase by 1.6 percent, officials said.
Most of the economic aid for the Arab Spring countries -- $770 million -- would go to establish a new "Middle East and North Africa Incentive Fund," the president said in his budget plan.
Analysts said it was difficult to tell how much of the proposal was actually new money.
"As presented it's very difficult to determine if the Arab spring fund is new wine in new bottles or old wine in new bottles," said John Norris, a former U.S. foreign aid worker now at the Center for American Progress.
The Middle East and North Africa Incentive fund "will provide incentives for long-term economic, political, and trade reforms to countries in transition -- and to countries prepared to make reforms proactively," the White House budget document said.
The proposal said this approach "expands our bilateral economic support in countries such as Tunisia and Yemen, where transitions are already underway."
It would also build on other programs for the area, including up to $2 billion in regional Overseas Private Investment Corporation financing, up to $1 billion in debt swaps for Egypt, and approximately $500 million in existing funds re-allocated to respond to the region last year, the budget document said.
It did not say how the Middle East and North Africa Incentive Fund would be divided between countries, or give any other details of the plan.
Egypt has long been among the top recipients of U.S. aid, getting about $1.6 billion annually, mostly in military assistance. In fiscal 2012, $250 million of aid approved for Egypt was economic; $1.3 billion was military and there was a $60 million "enterprise fund" approved by Congress.
No U.S. assistance is moving to Egypt at the moment, U.S. lawmakers and their aides said last week. Some legislators favor cutting off aid to Egypt entirely if it does not drop accusations against American democracy activists and lift a travel ban on them.
Obama continued the practice of putting proposed foreign assistance for war zones in a separate account. This account, known as the "Overseas Contingency Operations," includes $8.2 billion for the State Department and foreign aid.
It includes $3.3 billion for Afghanistan, $1 billion for Pakistan, and $4 billion for Iraq, where U.S. troops have left the country but the State Department has picked up some of their functions such as police training.
Posted by MrGarabaldi at 11:26 AM